Central banks around the world, including in Europe, are buying increasing volumes of equities as part of diversification by official asset holders that are now a global force on international capital markets. This is among the findings of Global Public Investor (GPI) 2014, the first comprehensive survey of $29.1 trillion (tn) worth of investments held by 400 public sector institutions in 162 countries. 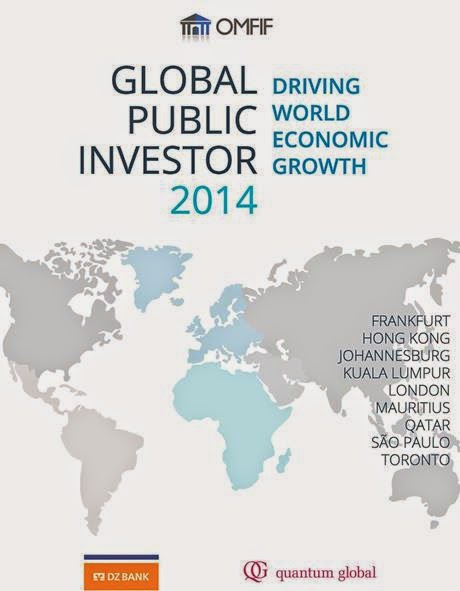 The report, focusing on investments by 157 central banks, 156 public pension funds and 87 sovereign funds, underlines growing similarities among different categories of public entities owning assets equivalent to 40% of world output. It is published by the Official Monetary and Financial Institutions Forum (OMFIF), a global research and advisory group, with the support of DZ BANK and Quantum Global Group.

In the aftermath of the financial crisis, different forms of ‘state capitalism’ have come to the fore, the report says: ‘Whether or not this trend is a good thing may be open to question. What is incontestable is that it has happened.’

The assets of the overall survey of 400 GPIs comprise $13.2tn (including gold) at central banks, $9.4tn at public pension funds and $6.5tn at sovereign wealth funds.

One of the reasons for the move into equities reflects central banks’ efforts to compensate for lost revenue on their reserves, caused by sharp falls in interest rates driven by official institutions’ own efforts to repair the financial crisis. According to OMFIF calculations, based partly on extrapolations from published central bank data, central banks around the world have foregone $200bn to $250bn in interest income as a result of the fall in bond yields in recent years. This has been partly offset by reduced payments of interest on the liabilities side of their balance sheets.

GPIs as a whole appear to have built up their investments in publicly-quoted equities by at least $1tn in recent years.

The report will be launched at City Hall in London on 17 June, as well as in other cities including Hong Kong on 17 July, Toronto on 16 September and in Washington on 22 September.

The study recommends broad categories of public investors should adopt the IFSWF-administered Santiago Principles on transparency and accountability. It outlines suggestions on how to channel large-scale long-term funds into investment areas like infrastructure, energy and transport around the world, emphasising the need for co-investment, partnership and knowledge-sharing among diverse investment organisations from the public and private sectors.

‘The size and over-arching nature of transactions make necessary an intermingling of expertise and a pooling of risk. Combining expertise in emerging market and infrastructure investments by sovereign funds and pension funds is just one area with great potential.’

In the field of corporate governance and responsible equity ownership, the report recommends public investors should step up engagement with private sector shareholders to ensure appropriate stewardship.

The survey emphasizes the two-edged nature of large volumes of extra liquidity held by GPIs. These assets have been built up partly as a result of efforts to alleviate the financial crisis, through foreign exchange intervention by central banks in emerging market economies or quantitative easing by central banks in the main developed countries. But deployment of these funds on capital markets can drive up asset prices and is thus a source of further risks. ‘Many of these challenges [faced by public entities] are self-feeding', the report says. ‘The same authorities that are responsible for maintaining financial stability are often the owners of the large funds that have the potential to cause problems.’

The study highlights how a recession-induced decline in interest rates in the major reserve currencies – the dollar and the euro – has had a seriously negative effect on the profitability of reserve holdings by central banks, adding to the drive for diversification. Some central bankers fear the need for government finance to support their budgets may strain on their own independence.

The report adds that GPIs can be increasingly expected to have their behavior and performance measured against wider public goals. The challenges go well beyond the pressures on western central banks caused by extension of their responsibilities into wider policy areas such as fiscal matters. ‘Asset managers may face efforts to influence their investments in areas like infrastructure or social security systems. Public investors of all categories may be called upon to take part in global and regional safety nets, such as through reserve asset pooling, working alongside institutions like the International Monetary Fund.’ It concludes: ‘Public asset managers need better to understand and manage the political fields into which they will inevitably be drawn.’