A group of French and Russian scientists, including three Moscow Institute of Physics and Technology (MIPT) specialists, has discovered a new peculiarity of the Martian atmosphere. The scientists had analyzed satellite-acquired data and concluded that the dust particles in the planet’s atmosphere can be of two types. The scientific article which presents the results of the research in detail has been published in the magazine Icarus (in English). A more simplified Russian version is available at the website of the Space Research Institute. 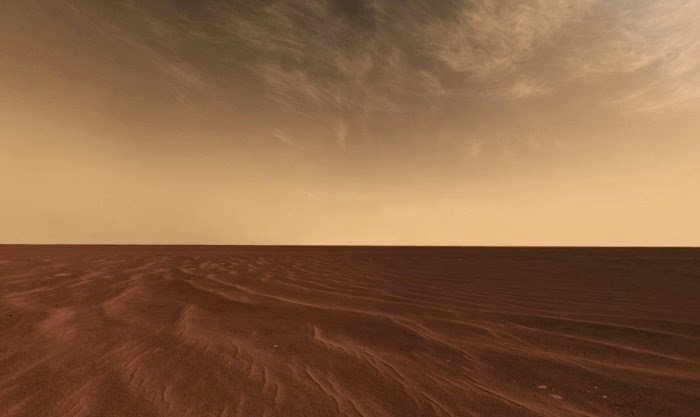 The Russian contributors to the research, Anna Fedorova, Alexander Rodin and Oleg Korablev, are the specialists of MIPT and SRI (IKI) RAS. These scientists and their French colleagues from the Paris Observatory and LATMOS research laboratory have carried out a simultaneous analysis of the ultraviolet and infrared atmospheric extinctions from SPICAM, the spectrometer on the board of the orbital station Mars Express.

The results were received during the solar occultations at the beginning of Northern summer on Mars. Before the Sun is completely eclipsed by the planetary disk, its rays pierce through the atmosphere and then get “caught” by the spectrometer’s detector. Having gone through the atmosphere, the solar rays show a different spectrum with the changes hinting at the atmosphere’s makeup, the amount of various aerosols and the size of their particles. This method was applied in order to understand the way the particles are distributed in the atmosphere.

The researchers have found out that the dust particles in the Martian atmosphere are not homogeneous, but can be roughly grouped into two modes. The first – coarser - mode is represented by both H2O ice grains with the average radius of 1.2 μm, and slightly smaller dust particles (R = 0.7 μm).

The second mode is a lot finer, it is an aerosol which consists of much smaller particles with a radius of 0.04–0.07 μm.

If compared with what is considered the norm on Earth, the air with such dust density is rather clean (rooms are usually a lot dustier); yet, aerosols are important because they, according to the scientists, play a key role in forming the planet’s climate.

Because of fine dust particles in the higher layers of the atmosphere, ice “embryos” are formed faster, which, in turn, influences clouds’ build-up. The clouds are responsible for both precipitation and temperature condition on the planet’s surface. Analyzing the way the dust is spread in the atmosphere of the planet with regard to the altitude and geographical coordinates is crucial for forming the full picture of what is happening on Mars.

Besides that, the dust modes which the scientists have discovered confirm that Martian dust storms (“dust devils”) are able to lift large quantities of substance from the planet’s surface.

The researchers point out that the fact of fine dust presence in the atmosphere can contradict the previously obtained data on the existence of the supersaturated steam at the same altitude.

With the extraneous particles present it would have been natural for the supersaturated steam to get further condensed and form clouds. The key to the solution of this contradiction is, presumably, that there are very low temperatures of about – 110 degrees Celsius. At such low temperatures the growth of ice grains slows down substantially.

Studying the clouds’ build-up in the higher layers of the atmosphere is important not only to understand what is typical for Mars, but also to know more of Earth, because similar processes can be here occurring as well.