Scientists have named a new species of horned dinosaur (ceratopsian) based on fossils collected from Montana in the United States and Alberta, Canada. Mercuriceratops (mer-cure-E-sare-ah-tops) gemini was approximately 6 meters (20 feet) long and weighed more than 2 tons. It lived about 77 million years ago during the Late Cretaceous Period. Research describing the new species is published online in the journal Naturwissenschaften.

Artist reconstruction of Mercuriceratops gemini, a new species of horned dinosaur that had wing-like ornamentation on the sides of its skull. 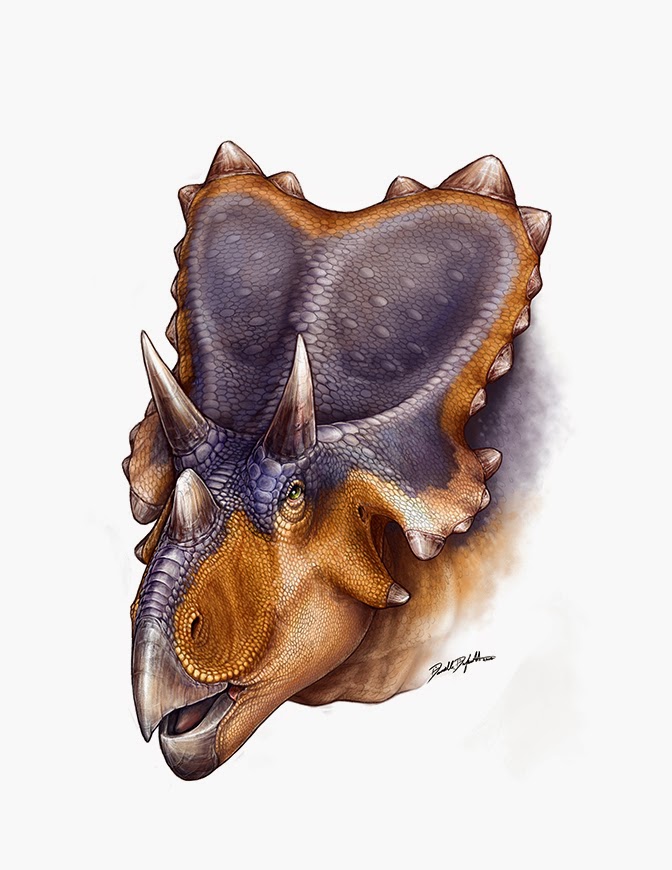 Mercuriceratops (Mercuri + ceratops) means “Mercury horned-face,” referring to the wing-like ornamentation on its head that resembles the wings on the helmet of the Roman god, Mercury. The name “gemini” refers to the almost identical twin specimens found in north central Montana and the UNESCO World Heritage Site, Dinosaur Provincial Park, in Alberta, Canada. Mercuriceratops had a parrot-like beak and probably had two long brow horns above its eyes. It was a plant-eating dinosaur.

“Mercuriceratops took a unique evolutionary path that shaped the large frill on the back of its skull into protruding wings like the decorative fins on classic 1950s cars. It definitively would have stood out from the herd during the Late Cretaceous,” said lead author Dr. Michael Ryan, curator of vertebrate paleontology at The Cleveland Museum of Natural History. “Horned dinosaurs in North America used their elaborate skull ornamentation to identify each other and to attract mates—not just for protection from predators. The wing-like protrusions on the sides of its frill may have offered male Mercuriceratops a competitive advantage in attracting mates.”

Mercuriceratops gemini skull fossils from the right side of the frill. 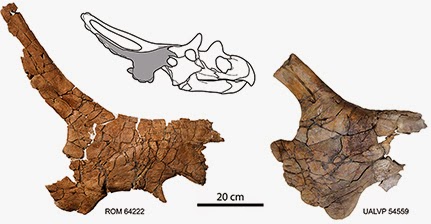 “The butterfly-shaped frill, or neck shield, of Mercuriceratops is unlike anything we have seen before,” said co-author Dr. David Evans, curator of vertebrate palaeontology at the Royal Ontario Museum. “Mercuriceratops shows that evolution gave rise to much greater variation in horned dinosaur headgear than we had previously suspected.”

The new dinosaur is described from skull fragments from two individuals collected from the Judith River Formation of Montana and the Dinosaur Park Formation of Alberta. The Montana specimen was originally collected on private land and acquired by the Royal Ontario Museum. The Alberta specimen was collected by Susan Owen-Kagen, a preparator in Dr. Philip Currie’s lab at the University of Alberta. “Susan showed me her specimen during one of my trips to Alberta,” said Ryan. “I instantly recognized it as being from the same type of dinosaur that the Royal Ontario Museum had from
Montana.” 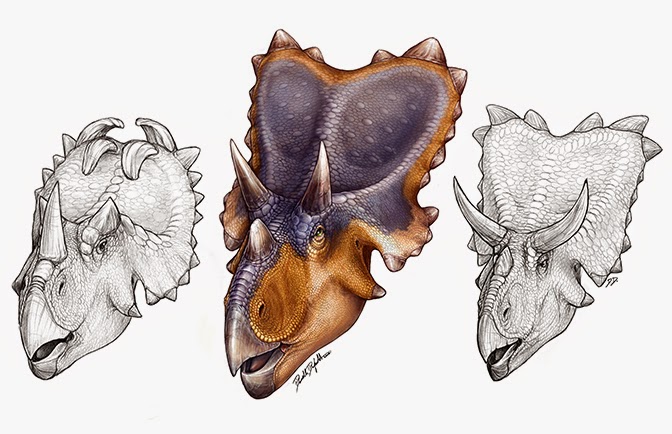 The Alberta specimen confirmed that the fossil from Montana was not a pathological specimen, nor had it somehow been distorted during the process of fossilization,” said Dr. Philip Currie, professor and Canada research chair in dinosaur paleobiology at the University of Alberta. “The two fossils—squamosal bones from the side of the frill—have all the features you would expect, just presented in a unique shape.”

“This discovery of a previously unknown species in relatively well-studied rocks underscores that we still have many more new species of dinosaurs to left to find,” said co-author Dr. Mark Loewen, research associate at the Natural History Museum of Utah. 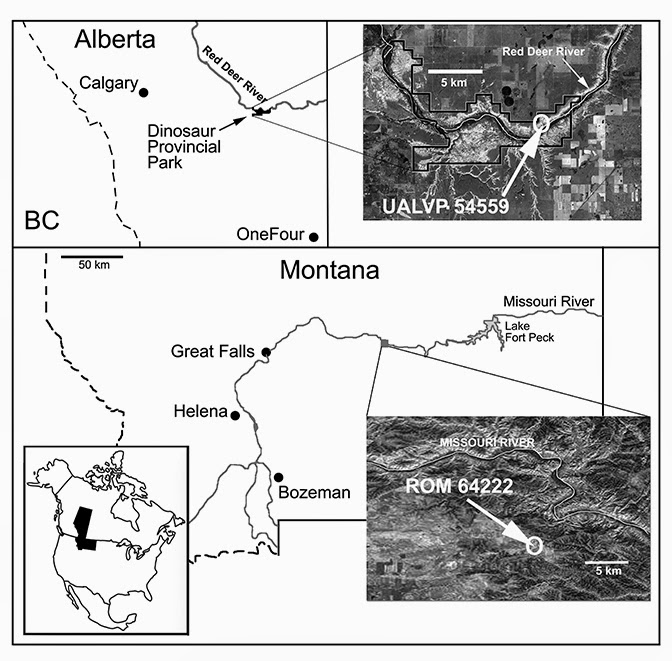 This dinosaur is just the latest in a series of new finds being made by Ryan and Evans as part of their Southern Alberta Dinosaur Project, which is designed to fill in gaps in our knowledge of Late Cretaceous dinosaurs and study their evolution. This project focuses on the paleontology of some of oldest dinosaur-bearing rocks in Alberta and the neighbouring rocks of northern Montana that are of the same age.