If evidence of the Higgs boson revealed two years ago was the smoking gun, particle physicists at Rice University and their colleagues have now found a few of the bullets.

The European Organization for Nuclear Research (CERN) published research in Nature Physics this week that details evidence of the direct decay of the Higgs boson to fermions, among the particles anticipated by the Standard Model of physics.

A graphic shows particle traces extending from a proton-proton collision at the Large Hadron Collider in 2012. The event shows characteristics expected from the decay of the Standard Model Higgs boson to a pair of photons. Further analysis of collisions in 2011 and 2012 has found evidence that the Higgs also decays into fermion particles, according to a new paper in Nature Physics to which Rice University scientists contributed. 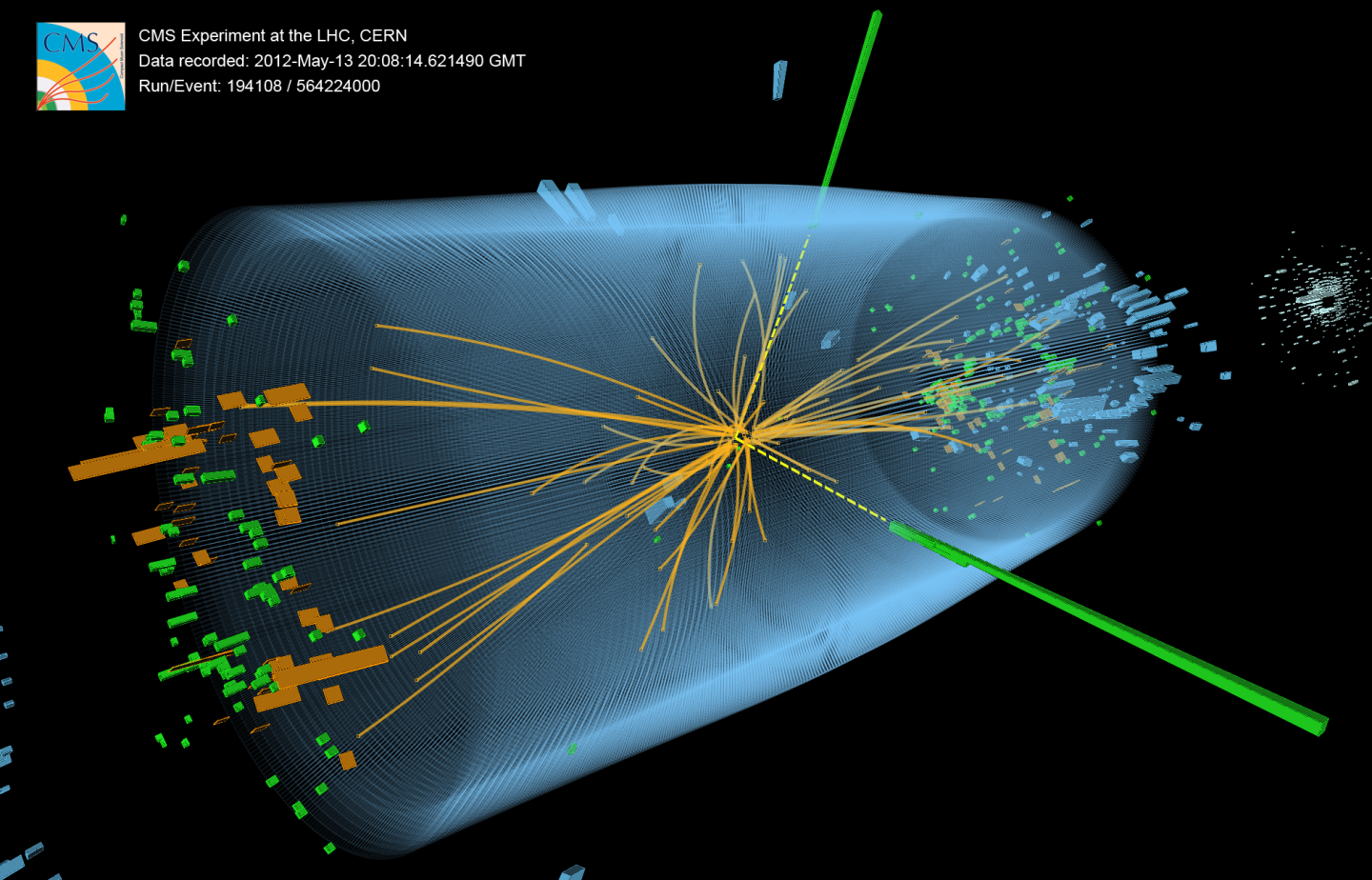 The finding fits what researchers expected to see amid the massive amount of data provided by the Large Hadron Collider (LHC). The world’s largest collider smashed protons together in hope that the encounter would produce the short-lived Higgs boson, leaving signs of its decay in the traces recorded by experiments designed and built at Rice and elsewhere.

“In July 2012, we knew we had discovered some sort of boson, and it looked a lot like it was a Higgs boson,” Padley said. “To firmly establish it’s the Standard Model Higgs boson, there are a number of checks we have to do. This paper represents one of these fundamental checks.”

The decadeslong search for the Higgs, which physicists believe gives mass to the fundamental particles, has been a primary focus of the $6 billion LHC. The CMS is one of two main experiments at the collider. The other, ATLAS, has also found strong evidence of fermions from decaying Higgs bosons, though that team has yet to publish its results.

The collider is shut down for an upgrade to be completed next year, but the mountain of data from the first run of experiments through 2012 has yielded spectacular results, Padley said. Sifting through the data, he said, is “like doing the analysis at a crime scene, when they look to see which gun fired the bullets. As we find more evidence, it looks more like a Standard Model Higgs boson. This paper is important because it really establishes that it’s decaying to fermions.”

Fermions are even more elemental particles that include quarks and leptons (which include another subparticle, electrons). They exist for only a minute fraction of a second after emerging from the decaying boson, but because they’re moving away from the collision at tremendous speed, they can be tracked.

Capturing their traces takes highly sophisticated equipment, Ecklund said. “I’ve been working on the pixel detector, the innermost part of CMS,” he said. “It’s a bit like a 66-million-pixel video camera that takes 40 million frames a second. We’re basically watching the collisions of the proton beams and looking for all the charged particles that come out.”

Layers of electronic sensors that surround the collider track many kinds of particles, each of which leaves a unique signature that includes its lifetime and path. “We’re able to connect the dots to see these tracks,” Ecklund said. “For the Higgs studies, particularly in the case of the fermions, we’re looking for Higgs-to-bottom quarks and Higgs-to-tau (antitau) pairs. Taus are heavy versions of the electron.”

The Rice researchers are building and testing CMS components for the upgraded LHC, which they expect CERN will boot up next spring for the second run of experiments starting in the summer of 2015. “It’s going to be focused on new things that could appear at higher energies,” Ecklund said. “One definite target will be seeing more Higgs bosons, which should tell us a lot more about their properties.

“The main excitement is going to be that because the energy is higher, we could produce the Higgs in association with other particles,” he said. Of particular interest will be evidence of heavy top quarks and how they relate to the Higgs. “They should actually have the strongest coupling to the Higgs because the top quark and the Higgs combined make a fairly heavy thing to produce.”

Ecklund said the upgraded LHC should provide the necessary energy to produce many more top quarks and Higgs bosons. “We’re interested in understanding how the top quark fits into the Standard Model and whether, since it’s so heavy, it could have a special role in relating to the Higgs. Maybe there are hints of new physics that aren’t in the Standard Model,” he said. “We know the standard model is incomplete.”

“We’re trying to probe questions about the universe and dark matter. In fact, there was a big study of the priorities in particle physics, and the No. 1 priority for the entire field is to study the properties of this boson and use it as a tool for discovery. This represents a step down that path.”

Read the abstract at http://www.nature.com/nphys/journal/vaop/ncurrent/abs/nphys3005.html