As the Navy prepares to deploy its first laser weapon on a ship later this summer, Office of Naval Research (ONR) officials announced June 11 that they have finished awarding contracts to develop a similar weapon to be used on ground vehicles. 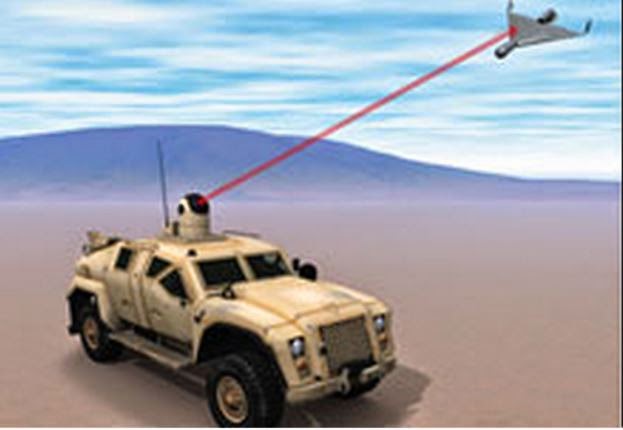 ONR is working with Naval Surface Warfare Center Dahlgren Division and industry partners on the development of GBAD’s components and subsystems, including the laser itself, beam director, batteries, radar, advanced cooling, and communications and command and control.

“We’re confident we can bring together all of these pieces in a package that’s small enough to be carried on light tactical vehicles and powerful enough to counter these threats,” said Brig. Gen. Kevin Killea, vice chief of naval research and commanding general, the Marine Corps Warfighting Laboratory.

The GBAD system is being designed for use on light tactical vehicles such as the Humvee and Joint Light Tactical Vehicle. With the proliferation of UAV technology, Marine Corps leaders expect that units increasingly will have to defend themselves against adversaries trying to perform reconnaissance and surveillance on them from the air.

“We can expect that our adversaries will increasingly use UAVs and our expeditionary forces must deal with that rising threat,” said Col. William Zamagni, acting head of ONR's Expeditionary Maneuver Warfare and Combating Terrorism Department. “GBAD gives the Marine Corps a capability to counter the UAV threat efficiently, sustainably and organically with austere expeditionary forces. GBAD employed in a counter UAV role is just the beginning of its use and opens myriad other possibilities for future expeditionary forces.”

The technologies being developed under the GBAD program are a direct response to the Marine Corps Science and Technology Strategic Plan, which calls for a mobile directed-energy weapon capable of destroying threats such as UAVs.

“Aggressive action against air threats is needed for the Marine Air-Ground Task Force to conduct expeditionary maneuver. Everything about this program is geared toward realizing a viable directed-energy capability in support of that objective to allow our Marines to be fast and lethal,” said Lee Mastroianni, program manager for Force Protection in ONR’s Expeditionary Maneuver Warfare and Combating Terrorism Department.

Some of the system’s components already have been used in tests to detect and track UAVs of all sizes. Later in the year, researchers will test the entire system against targets using a 10kW laser as a stepping stone to a 30kW laser.

The 30kW system is expected to be ready for field testing in 2016, when the program will begin more complex trials to ensure a seamless process from detection and tracking to firing, all from mobile tactical vehicles.

“These partnerships, along with strong support from Marine Corps leadership, are vital as we move forward to see how this capability opens up new frontiers on the battlefield,” Mastroianni said.

All the pieces for the system are being developed under ONR’s Future Naval Capabilities program, which brings proven technology to military acquisition programs in rapid fashion, going from research-and-development to delivery in five years.