At first glance, Titan has little in common with Earth. The largest moon of Saturn, temperatures on Titan's surface dip nearly 300 F below zero, its seas slosh with liquid methane, and its sky is a murky shade of creamsicle.

And yet, fresh analysis of mysterious features spotted on the moon indicates that it experiences one of the same global processes that is important here on Earth.

In a study published in the latest issue of Nature Geoscience, scientists operating the Cassini satellite, including Stanford's Howard Zebker, present evidence that Titan has seasonal cycles analogous to Earth's, and that the moon's surface conditions change as the Titan year unfolds.

The Cassini satellite has been orbiting Saturn and its moons since 2004. Zebker, a professor of electrical engineering and of geophysics, is one of the lead scientists operating the spacecraft's radar instruments. Radar is critical for studying Titan in particular because the moon's atmosphere is typically too cloudy and thick for optical instruments to see through easily.

During five fly-bys of Titan's Ligeia Mare – a liquid methane sea larger than Lake Superior – the scientists noticed bright features that appeared and changed shape on the sea's surface. After ruling out a technical glitch or an exotic artifact of radar scattering, the group focused on three causes most likely for the phenomena. 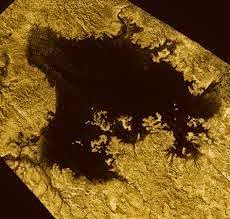 "We are driven to use our imaginations and picture what could be happening on the sea to produce a transient feature," Zebker said.

One such explanation could involve low-density solids that usually sink below the surface – much like silt in a river delta – but then rise and clump together. Unlike ice on Earth, frozen methane is denser than its liquid phase, so it sinks instead of floats. "On Earth, ice floats and we get icebergs," Zebker said. "On Titan, icebergs would sink."

Seasonal temperature changes could account for the appearance and disappearance of these solids, as they might be released from the bottom and rise to the surface in warmer temperatures.

A second explanation involves bubbles. As summer temperatures warm the sea, bubbles trapped by the sunken frozen material could be released and float to the surface.

Finally, the bright features could be cresting waves, whipped up by summer winds.

"Waves are usually not visible on Titan, but in this case the onset of the summer season may create a more turbulent atmosphere," Zebker said. "On Earth we see this effect as the ocean warms and we start a new hurricane season."
A global cycle

All together, the observation and the possible explanations suggest that Titan's surface changes seasonally. They also support the idea that liquid methane might flow and evaporate in response to changing exposure to sunlight, in much the same way that water cycles through various systems on Earth.

Liquid methane lakes and seas have been observed on Titan's surface, and the atmosphere appears to carry methane and ethane similar to the way that Earth's atmosphere transports water vapor, Zebker said, and so scientists can expect Titan to have variations in liquid methane, ethane and other hydrocarbons driven by changes in temperature and sunlight.

As with any discovery that compares an alien world to Earth, the question of "Can it support life?" must be addressed. Although a dynamic process like the methane cycle and seasons go hand-in-hand with life on Earth, Zebker said that this discovery didn't significantly increase the chances that this moon of Saturn might support life.

"If there is sufficient energy pumped into Titan's atmosphere and surface from the sun, then it is possible that this would spawn evolution of life forms that take advantage of the energy source," Zebker said. "It would be very different life than on Earth, as it is minus 292 degrees Fahrenheit most of the time. Still, Titan remains one of the best places for life to evolve in the solar system."