Plants can transfer their entire genetic material to a partner in an asexual manner.

Occasionally, two different plant species interbreed with each other in nature. This usually causes problems since the genetic information of both parents does not match. But sometimes nature uses a trick. Instead of passing on only half of each parent’s genetic material, both plants transmit the complete information to the next generation.
This means that the chromosome sets are totted up. The chromosomes are then able to find their suitable partner during meiosis, a type of cell division that produces an organism's reproductive cells. This allows the plants to stay fertile and a new species is generated.
Examples for such a combination of two genomes, called allopolyploidy, are found abundantly in both wild plants and crops like wheat, rapeseed and cotton. Now, for the first time, Ralph Bock’s group at the Max Planck Institute of Molecular Plant Physiology could show that new species can be generated in an asexual manner as well.
Natural grafting between an oak (left) and a beech (right). The complete genetic material can be exchanged between the graft partners at contact zones such as these. This can result in the generation of new plant species. 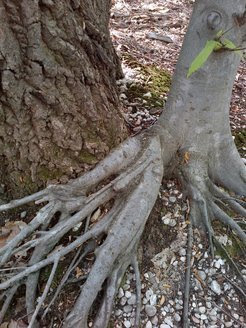 As in previous studies, Bock’s group at the Max Planck Institute of Molecular Plant Physiology used a method called grafting. It is generally known from nature that plants are able to grow together at their contact zones. In horticulture and viticulture, growers make use of this ability to bring characteristic traits of two varieties together without crossing them. For example, this method is used to play a trick on grape phylloxera, a notorious pest of commercial grapevines that attacks the roots of the plants.

By grafting pest-sensitive elite grape cultivars onto pest-resistant wild rootstocks infestation is effectively prevented. It was generally believed that a combination of desired traits can be obtained by grafting, but there is no exchange or recombination of genetic material – so-called horizontal gene transfer - between the grafted plants.

“In our previous work we were able to prove that, contrary to the generally accepted dogma, there is horizontal gene transfer of chloroplast genes at the contact zone between grafted plants. Now we wanted to investigate if there is a transfer of genetic information between the nuclei as well” Ralph Bock says while explaining the recent study.

The researchers introduced resistance genes against two different antibiotics into nuclear genomes of the tobacco species Nicotiana tabacum and Nicotiana glauca, which usually cannot be crossed. Afterwards, Nicotiana glauca was grafted onto Nicotiana tabacum or the other way round. After fusion had occurred, the scientists excised tissue at the contact zone and cultivated it on a growth medium containing both antibiotics, so that only cells containing both resistance genes and thus, DNA from both species, should survive. Surprisingly, the scientists succeeded in growing up numerous doubly resistant plantlets.

To determine if the acquired double resistance is due to the transfer of single genes or the transfer of the entire genetic material, the researchers counted the chromosomes in the nuclei of the resistant plants. If complete genomes were transferred, the new plants would contain the sum of the chromosome numbers of the two species.

“Indeed, we found 72 chromosomes in the resistant plants”, Ralph Bock explains, “72 is the sum of the 24 N. glauca chromosomes and the 48N. tabacum chromosomes.” Thus, plantlets generated from the graft junction contained the genetic information of both species. “We managed to produce allopolyploid plants without sexual reproduction”, Sandra Stegemann, joint first author of the study, is pleased to say.

When the scientists grew their new plants in the greenhouse, it became obvious that they combined characteristics of both progenitor species. But there was one striking difference: the new plants grew remarkably faster than their parents. Such a fitness advantage is also known from allopolyploid plants in nature and from the superior growth properties of allopolyploid crops. Since the newly generated plants were able to reproduce sexually and their progeny was fertile as well, one can consider them as a new species. The scientists named itNicotiana tabauca.

“Thus, grafting two species and selecting for horizontal genome transfer could become an interesting method for breeders who could use this approach to create new crop plants with higher yields and improved properties”, is the unanimous opinion of the scientists involved in the present study.