Hunting For Heat, Green Power Deep In The Earth

Capturing green energy from deep in the Earth will bring competitive electricity and district heating – with help from Norway.

Ever since Jules Verne’s 1864 novel “ A Journey to the Centre of the Earth”, people have dreamt of capturing the heat of planet Earth. It exists in huge amounts, is completely renewable and emits no CO2.

“What we have done so far is no more than to scratch the surface of the Earth. The heat that many people extract from their gardens and then upgrade in heat pumps is not geothermal, but rather solar energy,” says SINTEF research scientist Alexandre Kane.

Geothermal energy is harvested by pumping cold water down an injection well, and bringing hot water up again via a production well. Left: In areas that produce geothermal energy today, the water flows through natural fractures in the bedrock between the wells, heating up in the process. Right: In future drilling in hard rock that lacks natural cracks, as in Norway, drilling a series of radiating bore-holes between the wells is a possibility. An alternative method is to create such cracks by subjecting the bedrock to extremely high hydraulic pressure (so-called “fracking”). 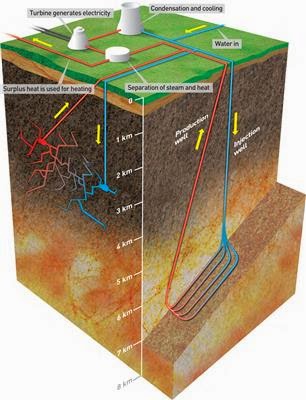 
Backed by a troop of industrial and technology companies, Kane is manager of the Nextdrill research project, whose members are going ahead at full speed to develop drilling tools that will make it profitable to exploit true geothermal heat.

The immediate aim is to drill wells to depths of five to six kilometres, where we encounter temperatures that are high enough to allow the heat to be used for district heating and electricity generation.

“For this to be commercially viable we will need to drill much more cheaply than the petroleum industry does, and without needing permanent subsidies. At the same time, we need to penetrate bedrock that is much harder than we find on the continental shelf in the North Sea. It may sound as though it will be impossible to do both of these things at once, but we have a great belief in the possibility, as long as research continues along the same lines after this preliminary project has come to an end,” says Kane.

As in all drilling operations, the taximeter rises rapidly. If geothermal heat is to be competitive as a source of energy, the time put into drilling must be kept to a minimum. Drilling operators who want to capture this heat therefore need to be able to drill at high speed. Nor can they afford the loss of time involved if the drill-bit is always having to be brought to the surface and replaced.

The Nextdrill project is a response to this challenge. Three of its members – SINTEF, the Swedish company Sandvik and Germany’s H.C. Starck – are collaborating on the development of materials for a drill-bit with a long working life.

Another participant is the Norwegian technology company Resonator, which is in the process of developing an electric percussion rotary drill, a tool that crushes rock by dealing it hammer-like blows as the drill-bit turns. Electrical operation offers the possibility of remote control and more energy-efficient drilling systems than technology based on today’s pneumatic or hydraulic systems.

In the course of this year the Nextdrill project will carry out its first small-scale drilling trials near Ås in Akershus County. In August and again in November, a specially designed version of Resonator’s percussion rotary drill will tackle hard rock. It will be fitted in turn with commercially available drill-bits and bits made of the highly wear-resistant materials that are being developed by the project.

These trials have two main purposes. They will provide new knowledge about how wear occurs on drill-bits when rock is crushed using an electric percussion rotary drill. The tests will also show how the number of impacts per unit time affects the speed of drilling.

SINTEF’s project manager Alexandre Kane checks out a drill-bit that the Swedish company Sandvik has developed for mining operations. In future commercial drilling for deep geothermal energy, wells may need to be as much as a metre in diameter. 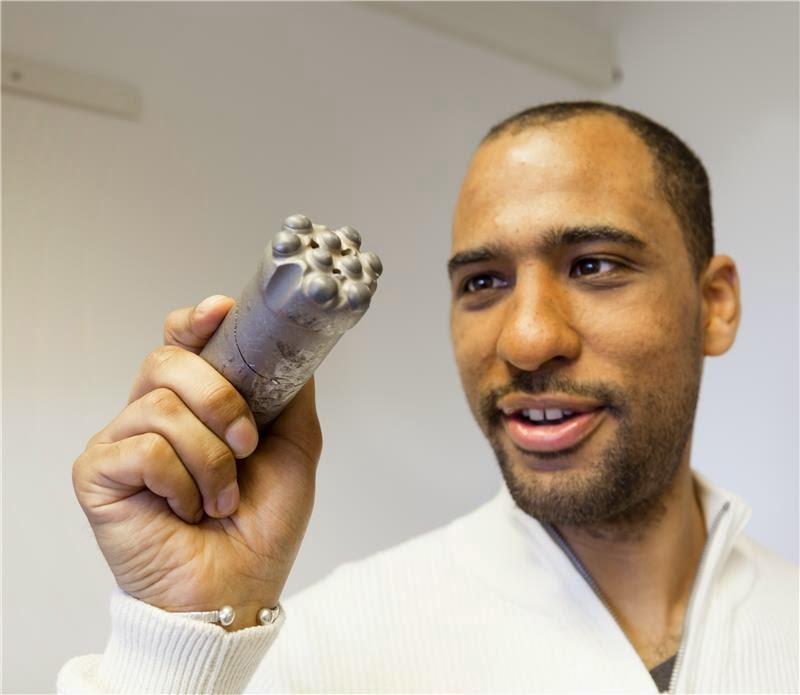 “Although we will not be drilling very deep during these tests we do expect to gather important data for the next stages of our efforts to develop highly durable materials,” says Kane.

The heat that SINTEF’s French project manager wants to capture is known as geothermal energy, and is derived from two sources that lie far beneath our feet. About one third of it is heat that has been stored in the Earth’s molten core since our planet was formed. The other two-thirds have their origin in the decay of radioactive isotopes in the Earth’s crust. This process releases heat, which means that the temperature rises, metre by metre, the further we drill into the interior of the planet.

Two types of well need to be drilled to exploit this heat; one to pump cold water down, and the other to bring hot water up again (see illustration). The drill-bit that does this job must be able to crush hard rock types such as granite. The main aim of the Nextdrill project is to identify a combination of hard-wearing, durable materials and technical solutions that can do this (see fact-sheet).

The drill-bit needs to be able to withstand a high level of friction, in addition to enormous amounts of mechanical abuse resulting from the high-frequency hammer impacts.

“Laboratory trials and virtual experiments performed by computer models have taught us a great deal about drilling through granite, and have enabled us to develop models that we use to find the optimal form and composition of the drill-bit. The drilling trials at Ås will give us measurements that will let us further improve the computer model,” says Kane.