How The 'Pillars Of Creation' … Were Created

The 'Pillars of Creation', an image made with the Hubble Space Telescope in 1995, is one of the most famous astronomical views. It shows how 'elephant trunks' of cooler interstellar gas are eroded by the intense radiation and winds from nearby massive stars.

The famous Hubble Space Telescope image of the 'Pillars of Creation', from 1995. 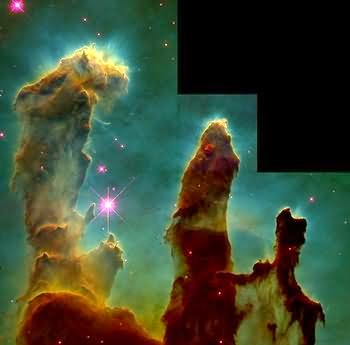 Now Scott Balfour, an astronomer at Cardiff University, has run a new simulation where similar structures appear with a remarkably close appearance to their real life counterparts. He also suggests that the stars that make these structures are of little help in forming new siblings. On Thursday 26 June Scott presented his results in a talk at the National Astronomy Meeting in Portsmouth.

A movie of the simulation, showing how the cloud collapses and forms 'elephant trunks' and bright rims over 1.6 million years.
Credit: S. Balfour / University of Cardiff

The massive O-type stars, more than 16 times as 'heavy' as our Sun, have short but dramatic lives. During their most stable phase on the so-called main sequence, they have surface temperatures of more than 30,000 degrees Celsius (on the Sun the surface is about 5500 degrees), are strong sources of ultraviolet light and emit copious material in a powerful wind.

All of this shapes their surroundings. The O-type stars heat any interstellar gas in their vicinity, creating bubbles which act like snow ploughs sweeping up surrounding colder material. In these regions, where gas is compressed, large numbers of new stars are seen forming so many scientists argue that the O stars drive star formation.

In his new work, Scott has tried to test this idea by simulating the way the gas behaves over a period of 1.6 million years, a simulation that took several weeks of computing time to calculate. His model explored what would happen when a massive star forms in a smooth cloud of gas that is already collapsing under its own weight.

Light from the O-type star creates a bubble in the cloud as expected, but its future can follow one of three paths. It may expand forever; expand, contract a little and then become almost stationary or expand and then contract all the way back to the centre of the cloud. Scott found that only the second case leads to prolific star formation and even then only under very specific conditions.

An image from the simulation, showing a slice of space 25 x 25 light years across and 0.2 light years thick (for reference 1 light year is about 9.6 million million km or a bit more than 63000 times the distance from the Earth to the Sun). The model depicts how a hot star in the centre of the cloud changes its surroundings over 1.6 million years, creating the ‘elephant trunks’ seen in Hubble imagery. Insets show close-ups of a pillar and bright rimmed cloud. 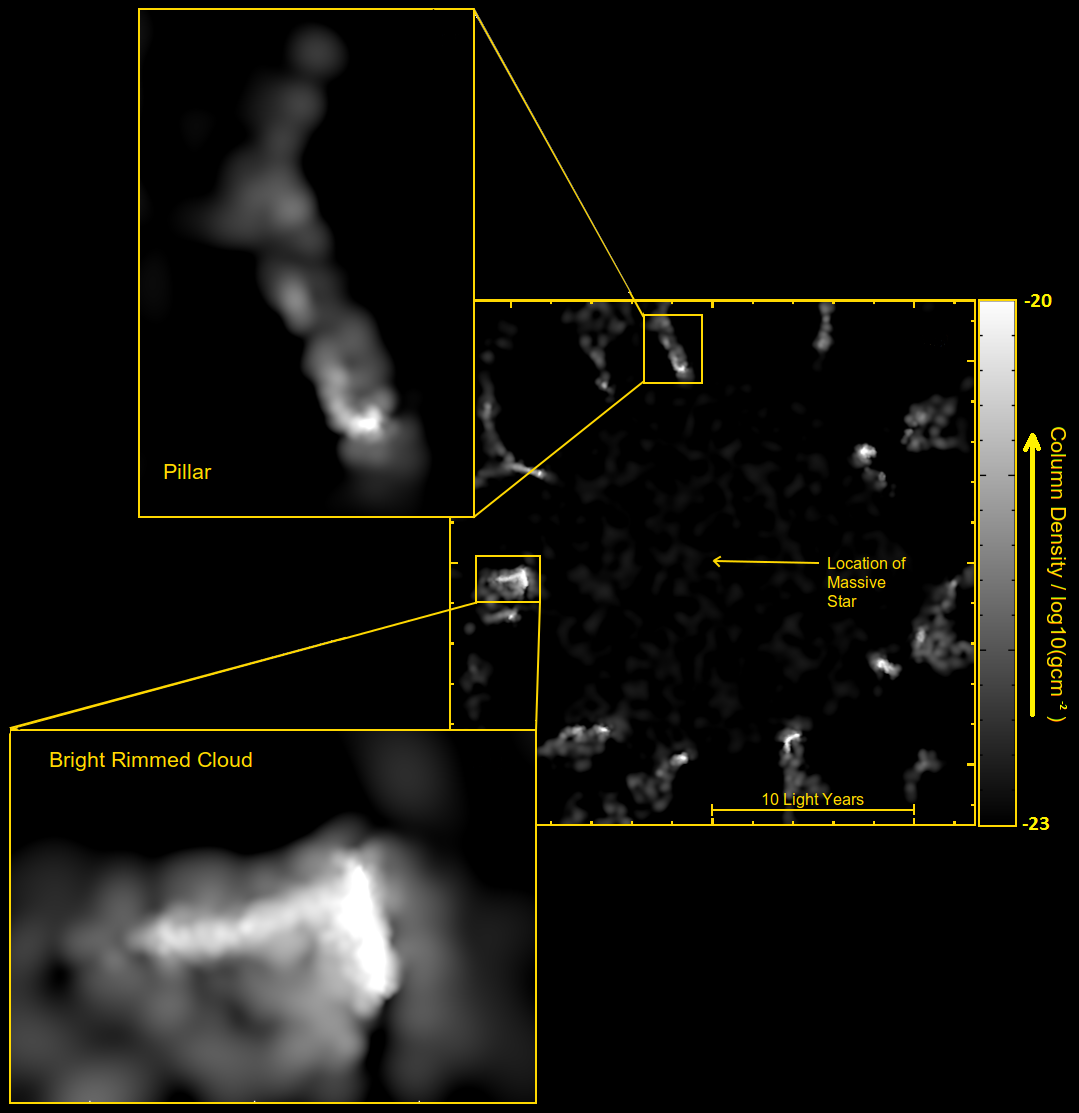 He comments: "If I'm right, it means that O-type and other massive stars play a much more complex role than we previously thought in nursing a new generation of stellar siblings to life."

His model also neatly replicates the bright rims and pillars seen in the Hubble image, which seem to form naturally along the outer edge of the bubble as it breaks up.

Scott adds: "The model neatly produces exactly the same kind of structures seen by astronomers in the classic 1995 image, vindicating the idea that giant O-type stars have a major effect in sculpting their surroundings."