As the number of pacemakers implanted each year reaches into the millions worldwide, improving the lifespan of pacemaker batteries has been of great concern for developers and manufacturers. Currently, pacemaker batteries last seven years on average, requiring frequent replacements, which may pose patients to a potential risk involved in medical procedures.

This picture shows that a self-powered cardiac pacemaker is enabled by a flexible piezoelectric energy harvester. 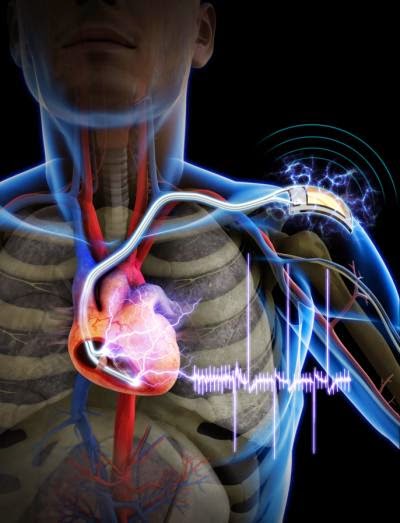 A research team from the Korea Advanced Institute of Science and Technology (KAIST), headed by Professor Keon Jae Lee of the Department of Materials Science and Engineering at KAIST and Professor Boyoung Joung, M.D. of the Division of Cardiology at Severance Hospital of Yonsei University, has developed a self-powered artificial cardiac pacemaker that is operated semi-permanently by a flexible piezoelectric nanogenerator.

The artificial cardiac pacemaker is widely acknowledged as medical equipment that is integrated into the human body to regulate the heartbeats through electrical stimulation to contract the cardiac muscles of people who suffer from arrhythmia. However, repeated surgeries to replace pacemaker batteries have exposed elderly patients to health risks such as infections or severe bleeding during operations.


The team's newly designed flexible piezoelectric nanogenerator directly stimulated a living rat's heart using electrical energy converted from the small body movements of the rat. This technology could facilitate the use of self-powered flexible energy harvesters, not only prolonging the lifetime of cardiac pacemakers but also realizing real-time heart monitoring.

Professor Keon Jae Lee said: "For clinical purposes, the current achievement will benefit the development of self-powered cardiac pacemakers as well as prevent heart attacks via the real-time diagnosis of heart arrhythmia. In addition, the flexible piezoelectric nanogenerator could also be utilized as an electrical source for various implantable medical devices."

Contacts and sources:
Lan Yoon
The Korea Advanced Institute of Science and Technology (KAIST)
on June 23, 2014