Signals from the immune system that help repel a common parasite inadvertently can cause a dormant viral infection to become active again, a new study shows.

Further research is necessary to understand the clinical significance of the finding, but researchers at Washington University School of Medicine in St. Louis said the study helps illustrate how complex interactions between infectious agents and the immune system have the potential to affect illness.

Pictured is a helminth parasite. When such a parasite infects mice, some of the signals that the animal’s immune system produces to defend against it can activate a latent viral infection. 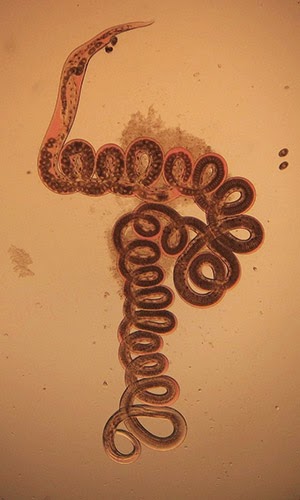 The scientists identified specific signals in mice that mobilize the immune system to fight tapeworms, roundworms and other helminths, parasites that infect nearly a quarter of all humans. The same signals cause an inactive herpes virus infection in the mice to begin replicating again.

The researchers speculated that the virus might be taking advantage of the host response to the worm infection, multiplying and spreading when the immune system’s attention is fixed on fighting the worms.

“The fact that the virus can ‘sense’ the immune reaction to a worm and respond by reactivating is a remarkable example of co-evolution,” said senior author Herbert W. Virgin IV, MD, PhD. “We think other interactions between multiple infectious agents and the immune system will be discovered over time that we will view as similarly sophisticated or maybe even devious. Understanding these interactions will help us survive in a complex microbial world.”

Viral infections typically begin with a battle with the host’s immune system. That clash may eliminate many copies of the virus, but some can survive and hide in the nucleus of long-lived host cells without replicating, entering a phase known as latency.

The researchers gave mice a virus similar to human Karposi’s sarcoma-associated herpes virus, a virus that causes cancers common in AIDS patients. After the infection became latent, the researchers infected the mice with parasitic helminth worms. The parasite then caused the mouse immune system to make cytokines, signaling molecules that help summon the immune cells and other factors needed to attack the parasites.

But the same cytokines also caused the herpes virus to start reproducing.

“Viruses become latent because they can detect immune system signals that tell them not to replicate,” said first author Tiffany Reese, PhD, the Damon Runyon Postdoctoral Fellow in Virgin’s lab. “Now, for the first time, we’ve shown a virus can detect immune system signals that tell the virus to start replicating. The signals are a response to the parasite infection, but the virus has developed a way of ‘eavesdropping’ on that response.”

Virgin, the Edward Mallinckrodt Professor and Head of Pathology and Immunology, emphasized that the finding only applies to a particular class of herpes viruses that does not include herpes simplex, a common cause of sexually transmitted disease, or cytomegalovirus, which causes problems in patients with compromised immune systems.

“The human health consequences of reactivating this type of virus are unclear,” he said. “We need to learn much more about how common these types of interactions are between multiple types of pathogens and the immune system before we can consider the implications for clinical treatment. And now we’ve identified an important place to begin asking those kinds of questions.”

Washington University School of Medicine in St. Louis
on June 26, 2014