In the coming decades, we will likely commute to work and explore the countryside in autonomous, or driverless, cars capable of communicating with the roads they are traveling on. A convergence of technological innovations in embedded sensors, computer vision, artificial intelligence, control and automation, and computer processing power is making this feat a reality.

Researchers from Carnegie Mellon University demonstrate the autonomous vehicle they developed with NSF support at an event in September 2013. Their driverless car arrived in Washington, D.C., in June 2014 for a demonstration at the Capitol. 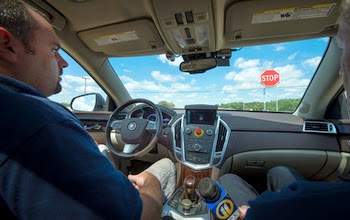 This week, researchers from Carnegie Mellon University (CMU) will mark a significant milestone, demonstrating one of the most advanced autonomous vehicles ever designed, capable of navigating on urban roads and highways without human intervention. The car was brought to Washington, D.C., at the request of Congressman Bill Shuster of Pennsylvania, who participated in a 33-mile drive in the autonomous vehicle between a Pittsburgh suburb and the city's airport last September.

Developed with support from the National Science Foundation (NSF), the U.S. Department of Transportation, DARPA and General Motors, the car is the result of more than a decade of research and development by scientists and engineers at CMU and elsewhere. Their work has advanced the underlying technologies--sensors, software, wireless communications and network integration--required to make sure a vehicle on the road is as safe--and ultimately safer--without a driver than with one. (In the case of the Washington, D.C., demonstration, an engineer will be on hand to take the wheel if required.)

The CMU-developed Cadillac SRX looks like any other car on the road, but hidden sensors, cameras and computers allow it to navigate on urban roads and highways without human intervention. 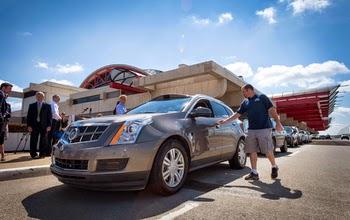 "This technology has been enabled by remarkable advances in the seamless blend of computation, networking and control into physical objects--a field known as cyber-physical systems," said Cora Marrett, NSF deputy director. "The National Science Foundation has long supported fundamental research that has built a strong foundation to enable cyber-physical systems to become a reality--like Dr. Raj Rajkumar's autonomous car."

Raj Rajkumar, a professor of electrical and computer engineering and robotics at CMU, is a leader not just in autonomous vehicles, but in the broader field of cyber-physical systems, or CPS. Such systems are already in use in sectors such as agriculture, energy, healthcare and advanced manufacturing, and they are poised to make an impact in transportation as well.

In 2007, Carnegie Mellon's then state-of-the-art driverless car, BOSS, took home the $2 million grand prize in the DARPA Urban Challenge, which pitted the leading autonomous vehicles in the world against one another in a challenging, urban environment. The new vehicle that Rajkumar is demonstrating in Washington, D.C., is the successor to that vehicle.

Unlike BOSS, which was rigged with visible antennas and large sensors, CMU's new car--a Cadillac SRX--doesn't appear particularly "smart." In fact, it looks much like any other car on the road. However, top-of-the-line radar, cameras, sensors and other technologies are built into the body of the vehicle. The car's computers are tucked away under the floor.

The goal of CMU's researchers is simple but important: To develop a driverless car that can decrease injuries and fatalities on roads. Automotive accidents result in 1.2 million fatalities annually around the world and cost citizens and governments $518 billion. It is estimated that 90 percent of those accidents are caused by human error.

"Because computers don't get distracted, sleepy or angry, they can actually keep us much safer--that is the promise of this technology," Rajkumar said. "Over time, the technology will augment automotive safety significantly."

In addition to controlling the steering, speed and braking, the autonomous systems in the vehicle also detect and avoid obstacles in the road, including pedestrians and bicyclists.

In their demonstration in D.C., cameras in the vehicle will visually detect the status of traffic lights and respond appropriately. In collaboration with the D.C. Department of Transportation, the researchers have even added a technology that allows some of the traffic lights in the Capitol Hill neighborhood of Washington to wirelessly communicate with the car, telling it the status of the lights ahead.

NSF has supported Rajkumar's work on autonomous vehicles since 2005, but it is not the only project of this kind that NSF supports. In addition to CMU's driverless car, NSF supports Sentry, an autonomous underwater vehicle deployed at Woods Hole Oceanographic Institute, and several projects investigating unmanned aerial vehicles (UAVs) including those in use in search and rescue and disaster recovery operations. Moreover, NSF supports numerous projects that advance the fundamental theories and applications that underlie all autonomous vehicles and other cyber-physical systems.

In the last five years, NSF has invested over $200 million in CPS research and education, building a foundation for the smart systems of the future.