Research led by the University of Warwick’s Systems Biology Centre and Warwick Medical School in collaboration with groups in Nice and Rotterdam has been able to demonstrate how the cycle of cell division in mammalian cells synchronizes with the body’s own daily rhythm, its circadian clock. 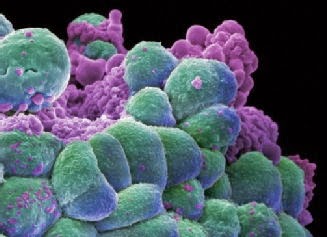 The study not only helps to explain why people with sustained disrupted circadian rhythms can be more susceptible to cancer, it may also help establish the optimal time of day to administer chemotherapy.

In a paper entitled Phase locking and multiple oscillating attractors for the coupled mammalian clock and cell cycle just published in PNAS (Proceedings of the National Academy of Sciences) the researchers drew on an idea of clock synchronization first demonstrated in the 18th century when Dutch scientist Christian Huygens observed the synchronization of two pendulum clocks. The University of Warwick led research team wanted to establish if the two clocks within a mammalian cell (the gene based “clock” regulating the cycle of cell division and the separate gene based clock within the same cell that was regulated by the body’s circadian) were or could be synchronized in the same way.

Past researchers had failed to measure the clock mechanism behind normal circadian rhythms in single cells. The Warwick research team solved that by using multispectral imaging of single live cells, computational methods, and mathematical modelling to track the cycles of the two clocks and were able to observe (by making copies of the key genes that fluoresce) that that they were indeed synchronized with each other.

While trying to understand why this synchronization has not been seen before they discovered that the protocol used by circadian researchers to reset the clocks in cells so that their clocks progress in step with each other disrupted the 1:1 synchronization between the clocks and pushed them over into a new pattern in which there were 3 cell divisions every two clock periods. This ability of the clock and cell cycle to have multiple patterns of oscillatory behavior is a surprising discovery that has not been seen before in any cellular systems.

These new findings could provide a significant clue as to why people with sustained disrupted circadian rhythms such as those doing shift work can be more susceptible to cancer. If a person’s circadian rhythms are messed up that disruption will also directly impact on the timings of cell division allowing more rapid proliferation. As Professor David Rand the Director of the University of Warwick’s Systems Biology Centre who led the Warwick research team said:

“Robust phase locking between the mammalian clock and the cell cycle is of primary relevance to cancer because the clock is often disrupted or turned off in cancer cells allowing faster cell division and disorganization of the crucial anti-cancer cellular processes whose timing is regulated by the circadian clock inside each cell.”

As well as providing a significant clue to a cause of cancer this research underpins a method of how to pick an optimal time of day to administer chemotherapy. Most chemotherapy drugs targets and attack cells at a particular phase of the cell division cycle. In healthy cells where the clock and cell cycle are synchronized this will be at a particular time of the day while in cancer cells that are not synchronized cell division will be occurring all round the clock. Thus one can time the therapy to avoid hitting susceptible healthy cells while still hitting the full amount of susceptible cancer cells.

The European project that provided the funding for this project was led by the oncologist Professor Francis Levi who has just moved to the University of Warwick and the Queen Elizabeth Hospital in Birmingham from France. He has pioneered basic and clinical research in the field of circadian biology and its applications to cancer. The experiments were carried out in the laboratories of Dr Franck Delaunay in Nice and Dr Bert van der Horst in Rotterdam.