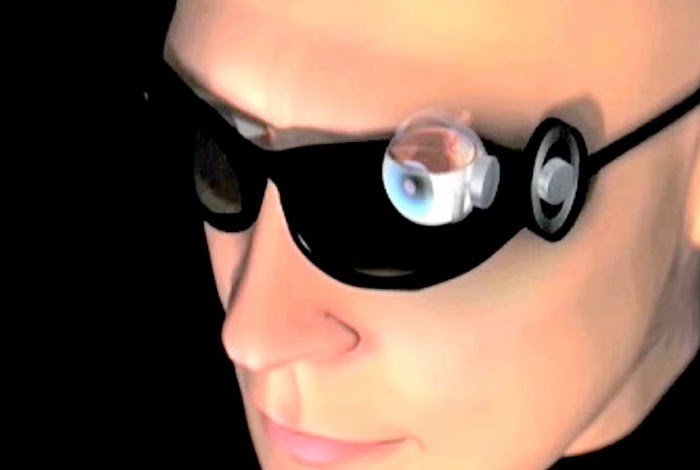 As part of the multi-­institutional Artificial Retina Project, Los Alamos researchers helped develop the first bionic eye. Recently approved by the U.S. Food and Drug Administration, the Argus II will help people blinded by the rare hereditary disease retinitis pigmentosa or seniors suffering from severe macular degeneration—diseases that destroy the light-­sensing cell in the retina. Los Alamos scientists served as the Advanced Concepts team, focusing on fundamental issues and out-­of the box ideas.

Significance of the research

The Argus II operates by using a miniature camera mounted in eyeglasses that captures images and wirelessly sends the information to a microprocessor (worn on a belt) that converts the data to an electronic signal. Pulses from an electrode array against the patient’s retina in the back of the eye stimulate the optic nerve and, ultimately, the brain, which perceives patterns of light corresponding to the electrodes stimulated. Blind individuals can learn to interpret these visual patterns.

The Los Alamos team examined how visual information is encoded in the pattern of electrical impulses traveling the optic nerve. The scientists developed better ways to visualize and interpret the resulting neural activity patterns when the retina is stimulated.

Using high-­performance video cameras and near-­infrared illumination, the Los Alamos team imaged tiny changes in the light scattering and birefringence properties of neural tissue that are associated with nerve electrical activity, the retina that were produced by stimulation. The team also advised the consortium on the use of compatible technologies to map the human brain function stimulated by the devices or by normal biological vision.

The Laboratory team developed theory—supported with experimental data—of how electrical activity of nerve cells produces polarized light signals that were used to image retinal function. They created a computer model of the retina directly predicting the dynamics of retinal neurons firing as function of patterns of stimulation. They also created theoretical models of the response of nerve cells to electrical stimulation, which suggest new strategies to stimulate patterns of neural activity with higher resolution and a greater specificity, useful to a wider range of individuals with visual impairment.

The need to improve the retina and electronics interface was the largest technical challenge of the Artificial Retina Project. The Los Alamos team investigated the use of novel microfabrication techniques to grow arrays of microscopic, nanostructured 3-D recording and stimulating arrays, and developed new techniques for coating electrode arrays that might enable advanced neural interfaces in the future, with many more channels and greater tolerance for the challenging environment of electronics implanted in biological tissue.

About the Artificial Retina Project

The DOE Artificial Retina Project is a multi-­institutional collaborative effort to develop and implant a device containing an array of microelectrodes into the eyes of people blinded by retinal disease. The ultimate goal is to design a device to help restore limited vision that enables reading, unaided mobility and facial recognition.

The DOE Office of Science funded the Los Alamos portion of the Artificial Retina Project. Laboratory Directed Research and Development (LDRD), the National Institutes of Health and the National Science Foundation have sponsored different aspects of basic R&D on neuroimaging, computational modeling and analysis of neural function, and materials and fabrication techniques that enabled the Los Alamos role in this project. The work supports the Lab’s Global Security mission area and the Science of Signatures and Information, Science, and Technology science pillars.