An international team of scientists including a Virginia Tech physicist have discovered that winds blowing from a supermassive black hole in a nearby galaxy work to obscure observations and x-rays.

The discovery in today's (June 19, 2004) issue of Science Express sheds light on the unexpected behavior of black holes, which emit large amounts of matter through powerful, galactic winds.

This is an illustration of the physical, spatial and temporal picture for the outflows emanating from the vicinity of the super massive black hole in the galaxy NGC 5548. The behavior of the emission source in five epochs is shown along the time axis. The obscurer is situated at roughly 0.03 light years (0.01 parsecs) from the emission source and is only seen in 2011 and 2013 (it is much stronger in 2013). Outflow component 1 shows the most dramatic changes in its absorption troughs. Different observed ionic species are represented as colored zones within the absorbers. 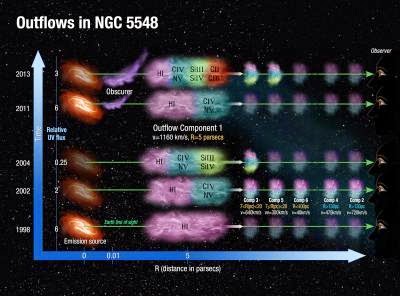 Using a large array of satellites and space observatories, the team spent more than a year training their instruments on the brightest and most studied of the "local" black holes — the one situated at the core of Type I Seyfert Galaxy NGC 5548.

What they found was a bit of a surprise.

The researchers discovered much colder gas than expected based on past observations, showing that the wind had cooled and that a stream of gas moved quickly outward and blocked 90 percent of x-rays. The observation was the first direct evidence of an obscuration process that — in more luminous galaxies — has been shown to regulate growth of black holes.

By looking at data from different sources, scientists found that a thick layer of gas lay between the galactic nucleus and the Earth blocked the lower energy x-rays often used to study the system, but allowed more energetic x-rays to get through.

A multi-wavelength observational campaign simultaneously looking at an object to decipher its secrets is rare, the researchers said. 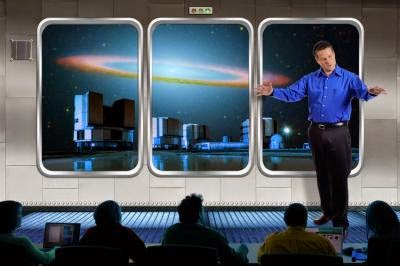 "I don't think anyone has trained so many scopes and put in so much time on a single object like this," said Nahum Arav, an associate professor of physics with Virginia Tech's College of Science. "The result is quite spectacular. We saw something that was never studied well before and we also deciphered the outflow in the object. We know far more about this outflow than any studied previously as to where it is and how it behaves in time. We have a physical model that explains all the data we've taken of the outflow over 16 years."

The discovery was made by an international team led by SRON Netherlands Institute for Space Research scientist Jelle Kaastra using the major space observatories of the European Space Agency, NASA, the Hubble Space Telescope, Swift, NuSTAR, Chandra, INTREGRAL, and other satellites and observation platforms.

"Shadowing" of light from a black hole had not been seen before. With the discovery, scientists were able to decipher the outflow.

"Until now our knowledge of these characteristics was very limited," Arav said. "Before we were making educated inferences — but now we know. We know the distance of outflow from the center of source, we know the mass of outflow, and we know what causes its observed changes. The shadowing was definitely a surprise —a beautiful phenomenon we were lucky to catch."

Over the past two years the shadowing has built up and Arav believes it won't last much longer than another year or two, but concedes scientists don't have a full enough observation to say how the shadowing feature is changing in time.