Just like on Earth, the Sun has spells of bad weather, with high winds and showers of rain. But unlike the all-too-frequent storms of the UK and Ireland, rain on the Sun is made of electrically charged gas (plasma) and falls at around 200,000 kilometres an hour from the outer solar atmosphere, the corona, to the Sun's surface. And the thousands of droplets that make up a 'coronal rain' shower are themselves each as big as Ireland.

A mosaic of images obtained using the Swedish Solar Telescope (SST), revealing evidence of a large-scale coronal rain shower pouring relentlessly into the dark sunspot on the surface of the Sun. The coronal rain shower appears as the labelled giant arching water-fall-like flow. At the top left the Earth is depicted on the same scale. 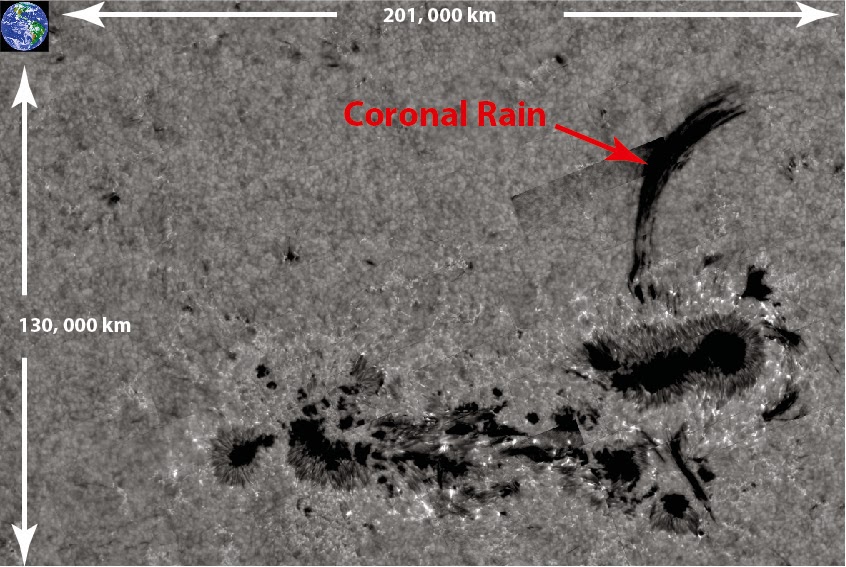 Now a team of solar physicists, led by Dr Eamon Scullion of Trinity College Dublin, have pieced together an explanation for this intriguing phenomenon, with imagery that shows a 'waterfall' in the atmosphere of the Sun. Dr Scullion presented their work at the National Astronomy Meeting (NAM 2014) in Portsmouth on Tuesday 24 June 2014.

Discovered almost 40 years ago, solar physicists are now able to study coronal rain in great detail thanks to state-of-the-art satellites like the NASA Solar Dynamics Observatory (SDO) and ground-based observatories like theSwedish 1-m Solar Telescope (SST). The scientists see regular and massive shifts in the solar 'climate', but despite decades of research have until now been unable to understand the physics of coronal rain.

It turns out that the process through which hot rain forms on the Sun is surprisingly similar to how rain happens on Earth. If the conditions in the solar atmosphere are just right, then clouds of hot, dense plasma can naturally cool and condense and eventually fall back to the solar surface as droplets of coronal rain.

In another parallel with terrestrial weather, the material that makes up the hot rain clouds reaches the corona through a rapid evaporation process. But here the evaporation is caused by solar flares, the most powerful explosions in the Solar system that are thought to help heat the Sun's outer atmosphere. The origins of solar coronal heating nonetheless remain one of the longest standing puzzles in solar physics.

The torrential rain storms, driven by solar flares, may play a fundamental role in controlling the mass cycling of the solar atmosphere and act as a kind of "solar-scale" thermostat in regulating the temperature fluctuations of the solar corona. Dr Scullion and his team have now developed a new insight into how coronal rain forms. Together with collaborators in Trinity College Dublin and the University of Oslo in Norway, he suggests a model of 'catastrophic cooling', where an exceptionally rapid fall in temperature causes material to change from rarefied coronal gas to 'raindrops'.

The team used images from the Swedish Solar Telescope based on La Palma in the Canary Islands, a telescope that produces some of the sharpest images of the Sun available. In June 2012 they observed a giant 'waterfall' of solar material pouring down from the outer atmosphere of the Sun into a dark sunspot on its surface. Another set of images have been assembled into a movie and show how a solar flare precedes a 'rain shower'.

Dr Scullion comments: "Showers of 'rain' and waterfalls on the Sun are quite something, though I wouldn't recommend taking a stroll there anytime soon. But the parallels with weather on Earth are both striking and surprising."