To Supernova Or Not To Supernova: A 3-D Model Of Stellar Core Collapse

What happens when massive stars collapse? One potential result is a core-collapse supernova. Astronomers can make observations of such events that tell us what is happening on the surface of a star when it explodes in a supernova, but it is considerably more difficult to know what is driving the process inside the star at its hot, dense core.

A massive stellar core not quite managing to transition to a supernova explosion because of a small "kink" instability in its rotational axis. 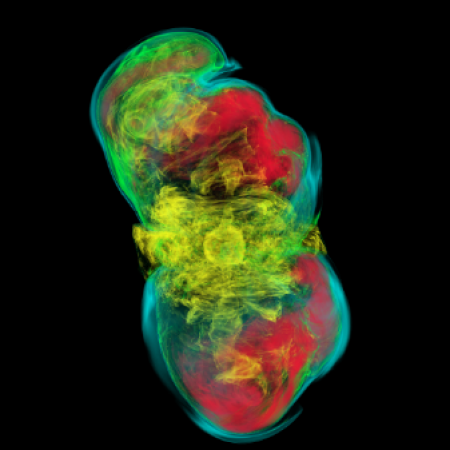 Astrophysicists attempt to simulate these events based on the properties of different kinds of stars and knowledge of the fundamental interactions of mass and energy, hopefully providing astronomers with ready predictions that can be tested with observational data.

In a recent publication, Caltech postdoctoral scholar Philipp Mösta and Christian Ott, professor of theoretical astrophysics, present a three-dimensional model of a rapidly rotating star with a strong magnetic field undergoing the process of collapse and explosion . . . or at least trying to.

Stars with a very rapid spin and a strong magnetic field are comparatively rare: no more than one in a hundred massive stars (those at least 10 times the mass of our sun) have these features. According to Mösta and Ott's research, when these bodies undergo core collapse, small perturbations around its axis of rotation may inhibit the process that would ordinarily lead to a supernova explosion.

Previous models of the collapse of rapidly rotating magnetized stellar cores assumed perfect symmetry around the axis of rotation. In effect, these models were two-dimensional. The models yielded the expectation that as these cores collapsed, the strong magnetic field combined with the rapid spin would squeeze the stellar material out into two narrow "jets" along the axis of symmetry, as shown below. 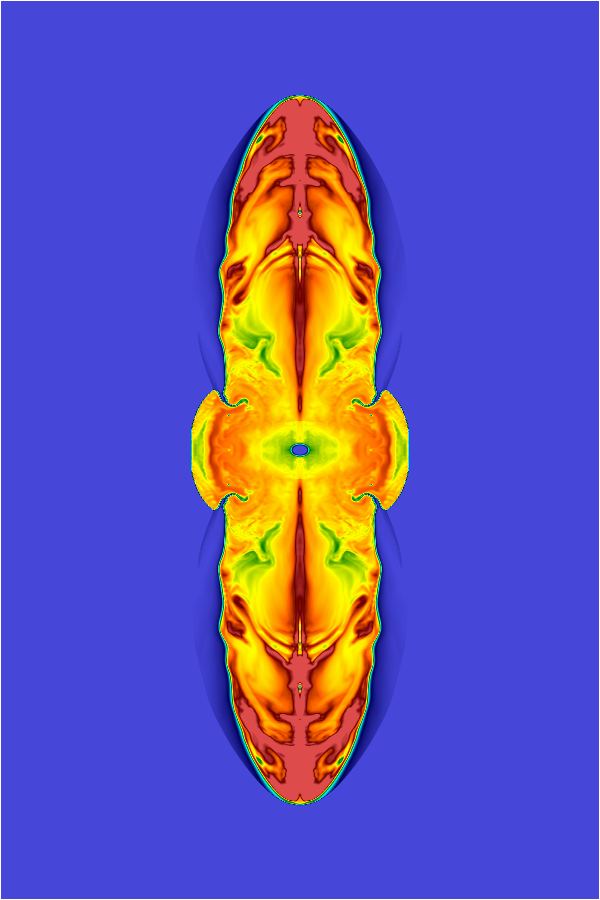 Assuming perfect symmetry around the axis of rotation can be excused in part as a matter of simplifying the scenario so that it could be simulated on an ordinary computer rather than the kind of supercomputer that Mösta and Ott's three-dimensional simulations require: 20,000 processors to output 500 terabytes—over 500 trillion bytes—of data that represent only some 200 milliseconds in time. But, says Ott, "Even working with paper and pencil, writing down equations and discussing them with other theoretical astrophysicists, we should have known that small perturbations can trigger an instability in the stellar core. Nothing in nature is perfect. As we learn from this model, even small asymmetries can have a dramatic effect on the process of stellar collapse and the subsequent supernova explosion."

When Mösta and Ott took on the ambitious task of simulating a magnetorotational core collapse in three dimensions, they introduced a small asymmetry into their initial conditions: a 1 percent perturbation (a kink) around the axis of symmetry. "You can think of it like the vertebrae in your spine," says Ott. "If one vertebra is slightly offset, there will be greater pressure on one side of the spinal column, and less pressure on the other side. This causes the disk and the material between the vertebrae to be squeezed toward the side with less pressure. The same thing happens when you introduce a kink in the axis of symmetry of a collapsing star with a strong magnetic field." 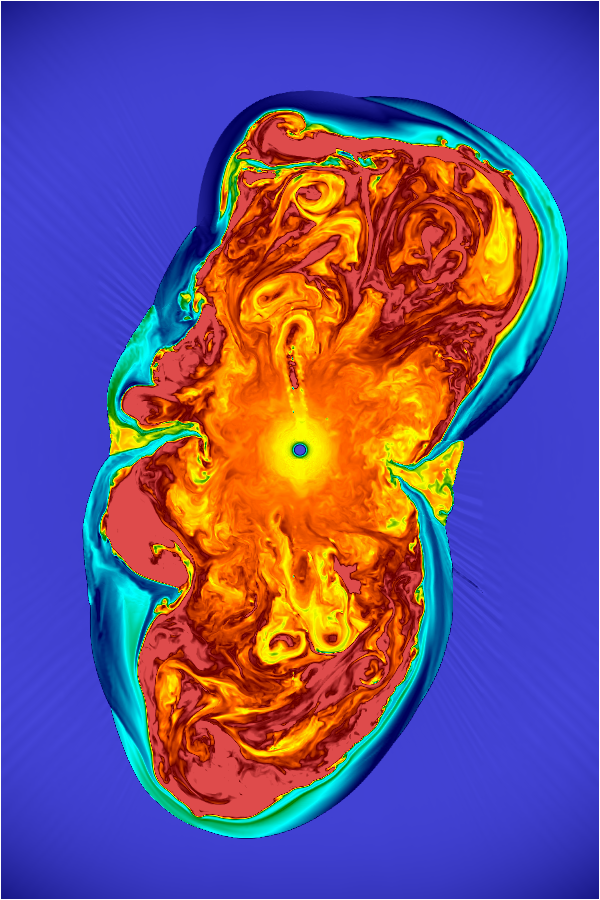 With an ever-so-slightly distorted magnetic field, the core is still constrained in the middle, just as it is in the axially symmetric model. But instead of producing two perfectly matched jets, the magnetic distortion—it is called a "kink instability"—produces two asymmetric, misshapen lobes, as shown at right. "Even more noteworthy," says Mösta, "is the fact that in the three-dimensional model, the explosion—the supernova—never quite gets off the ground."

This slideshow illustrates the three-dimensional simulation in a step-by-step fashion.

Setting the two simulations—two-dimensional and three-dimensional—alongside one another provide a dramatic visualization of the impact of even a small asymmetry in a rapidly-rotating, magnetized body. In a video that compares the two, 186 milliseconds of core collapse are slowed to fill two minutes of real time. The two events look very similar for about 20 milliseconds, before the kink instability in the three-dimensional model begins to deform the stellar core and constrain its progress toward supernova. 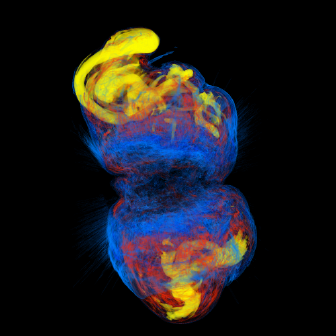 The kink instability in the three-dimensional simulation leads to a "wobbling" of the central funnel of material that is pushed out by the ultra-dense and hot stellar core, a proto-neutron star. "As the material expands, it gets wound in tubes around the spin axis of the star, like water being expelled vigorously from a garden hose left lying on the ground," says Mösta. In the three-dimensional view illustrated here, regions in which the magnetic field pressure dominates are yellow, while regions that are dominated by the normal pressure of the stellar gas are blue, red, and black.

Unlike the two-dimensional, axially symmetric simulations with their uniform jets along the axis of rotation, the three-dimensional simulations of Mösta and Ott result in two lobes of twisted and highly magnetized material that are only slowly pushed outward and do not show signs of a runaway explosion at the end of the simulation. More and longer simulations on more powerful supercomputers will be needed to determine the final fate of core collapse in a rapidly rotating magnetized star.

"We can be smarter in our simulations now," says Ott. "We are wrestling with a more interesting if less perfect universe—the one we actually live in."

The paper, "Magnetorotational Core-collapse Supernovae in Three Dimensions," appeared in the April 3, 2014, issue of Astrophysical Journal Letters and is authored by Mösta, Ott, Sherwood Richers, Roland Haas, Anthony Piro, Kristen Boydstun, Ernazar Abdikamalov, and Christian Reisswig, all of Caltech, and Erik Schnetter of the Perimeter Institute for Theoretical Physics in Waterloo, Ontario, Canada. This research was funded by the National Science Foundation, the Sherman Fairchild Foundation, the U.S. Department of Energy, and NASA.

Contacts and sources:
Written by Cynthia Eller
Caltech
on May 07, 2014