On 24 October 2012 observatories across the world were alerted about a huge stellar explosion, the GRB121024A, which had been located just hours before in the Eridanus constellation by NASA’s Swiftsatellite. However, only the European Southern Observatory using its Very Large Telescope (VLT) located in the Atacama desert in Chile managed to take accurate polarimetric measurements of the phenomenon.

Top left box (a): Image of the field of the GRB121024A captured by the Very Large Telescope (VLT), Chile. The GRB121024A is the point marked by the dotted lines. The glow of the GRB121024A in the image does not correspond to its distance from the Earth. In fact, as can be seen, the GRB121024A is one of the brightest objects in the field, despite being one of the most distant, if not the most distant one, in the image. So the point marked corresponds to the explosion of a star about ~11,000 million years ago when the age of the Universe was only one third of what it is now. General box (b): Artist's impression of the GRB121024A. It is possible to see the jets emerging from the dying star in the centre of which a black hole would form. The blue wave spread by the jet represents the circular polarization detected. 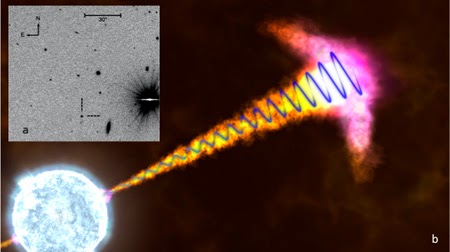 The data obtained on that explosion, which took place about 11,000 million years ago, have made it possible to reconstruct how a black hole is formed. The work, which has had the participation of the Ikerbasque researcher Javier Gorosabal, co-director of the Associated Unit with the Institute of Astrophysics of Andalusia/CSIC-UPV/EHU, has been published in the prestigious journalNature.

There is no other event in the cosmos that can compete in terms of energy and intensity with stellar explosions on the outer reaches of the universe and which are known as LGRBs (Long Gamma-Ray Bursts): in just one second a single GRB can emit as many as hundreds of stars like the Sun during its 10,000-million-year-lifetime.

For the last decade astrophysicists have been in possession of strong evidence that LGRBs occur when the so-called massive stars burst; these are huge stars with masses of up to hundreds of times bigger than that of the Sun and which, moreover, spin rapidly on a rotation axis.

As these stars are massive and spin, they do not explode like a normal star, which does so radially, as a ball does when it deflates, for example. The implosion of these huge stars would produce, according to theoretical models, a huge spinning top, which would turn in the way that water rotates down the plughole of a basin, until a black hole is finally formed. The energy given off by this gigantic explosion would be emitted in two jets displaying a high level of energy and which would be aligned with the rotation axis of the dying star.

What is more, all these stars have magnetic fields. And these are intensified further if they rotate rapidly, as in the case of the LGRBs. So during the internal collapse of the star towards the central black hole, the magnetic fields of the star would also swirl around the star’s rotation axis. And during the collapse of the star, a powerful “magnetic geyser” would be produced and be ejected from the environment of the black hole that is being formed; the effects of this can be felt at distances of billions of kilometres.

This complex scenario led one to predict that the light emitted during the explosion of the star must have been circularly polarized as if it were a screw. And that is what, for the first time, the authors have detected in Chile: a circularly polarized light that is the direct consequence of a black hole “recently” created on the outer reaches of the Universe and which has been confirmed by the theoretical model. What is more, an optical circular polarization to such a high degree had never been detected, and nor had one been detected in such a distant source. All this indicates that the GRB121024A is an extraordinary event.

The Planetary Sciences Group of the UPV/EHU-University of the Basque Country and Ikerbasque have participated in this discovery through the Associated Unit that the Institute of Astrophysics of Andalusia (IAA), which belongs to the Spanish National Research Council (CSIC), set up under the auspices of Euskampus at the Faculty of Engineering (ETSI, Bilbao). Among many other advantages, this partnership is an added benefit enabling the Associated Unit to participate in large international consortia like the one scientifically exploiting the VLT. The Associated Unit is jointly led by the UPV/EHU professor Agustín Sánchez Lavega (who is also the head of the Aula EspaZio Gela) and by Javier Gorosabel, scientific researcher of the CSIC and Ikerbasque Research Professor at the ETSI.

The VLT is one of the largest and best equipped telescopes in the world; it makes use of the exceptional astronomical observation conditions of the Atacama desert. That is why the use of the VLT is very limited and is regulated by a highly competitive process in which every six months an international committee selects the best proposals for observation submitted. So the only way to access these technologically state-of-the-art facilities is by means of powerful international consortia. 27 institutions belonging to 13 countries have participated in the study published by the prestigious journal Nature.

Contacts and sources:
University of the Basque Country