A new model accounting for the loss of stability in supernova explosions sheds some new light on this phenomenon.

Exploding supernovae are a phenomenon that is still not fully understood. The trouble is that the state of nuclear matter in stars cannot be reproduced on Earth.

In a recent paper published in EPJ E, Yves Pomeau from the University of Arizona, USA, and his French colleagues from the CNRS provide a new model of supernovae represented as dynamical systems subject to a loss of stability, just before they explode. Because similar stability losses also occur in dynamical systems in nature, this model could be used to predict natural catastrophes before they happen. Previous studies of the creeping of soft solids, earthquakes, and sleep-wake transitions have already confirmed the validity of this approach. 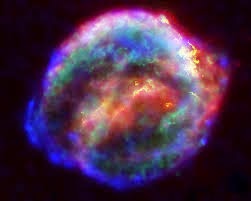 The authors show that the stars’ loss of stability can be described in mathematical terms as a so-called dynamical saddle-node bifurcation. This approach makes it possible to devise a universal equation describing supernovae dynamics at its onset, taking into account the initial physical conditions of stability. Unlike previous studies, this one sheds light on why the time scale of a supernova explosion—lasting between ten and thirty seconds—is considerably shorter than the overall pace of evolution of the star, in the billion year range.

This study also attempts to elucidate whether supernova explosions are genuine and do not result from a reversed implosion. Indeed, supernovae are believed to be initially subjected to an inward flow—as the star’s core may collapse into a neutron star or a black hole—that is subsequently superseded by the violent outward flow of the supernova explosion. The authors attempt to explain this phenomenon through a detailed model, demonstrating that the star enters a global free fall following its loss of stability.