A specially-bred strain of miniature swine lacking the molecule responsible for the rapid rejection of pig-to-primate organ transplants may provide a new source of skin grafts to treat seriously burned patients. A team of investigators from Massachusetts General Hospital (MGH) report that skin grafts from pigs lacking the Gal sugar molecule were as effective in covering burn-like injuries on the backs of baboons as skin taken from other baboons, a finding that could double the length of time burns can be protected while healing. The report in the journal Transplantation has been published online. 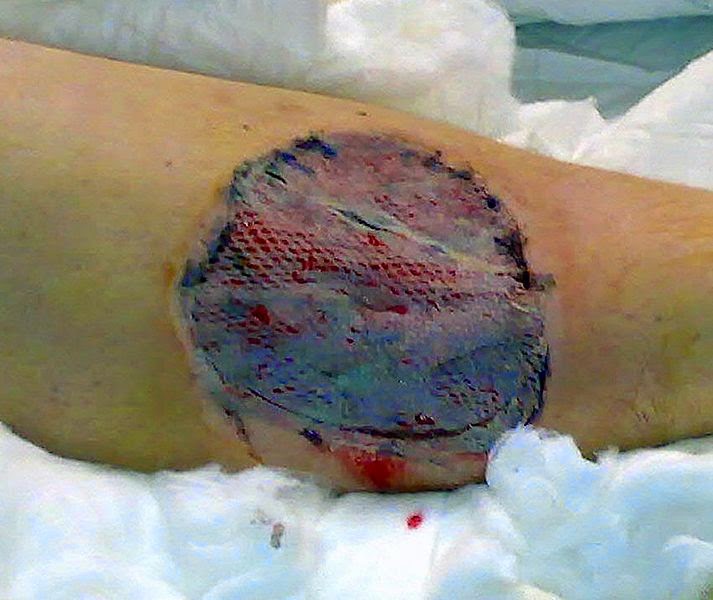 "This exciting work suggests that these GalT-knockout porcine skin grafts would be a useful addition to the burn-management armamentarium," says Curtis Cetrulo, MD, of the MGH Transplantation Biology Research Center (TBRC) and the Division of Plastic and Reconstructive Surgery, corresponding author of the Transplantation paper. "We are actively exploring options for establishing clinical-grade production of these grafts and hope to begin a clinical trial in due course."

A key component in the treatment of major burns, particularly those involving more than 30 percent of the body surface, is removing the damaged skin and covering the injury, preferably with a graft of a patient's own tissue. When insufficient undamaged skin is available for grafting, tissue from deceased donors is used as a temporary covering. But deceased-donor skin grafts are in short supply and expensive – disadvantages also applying to artificial skin grafts – must be carefully tested for pathogens and are eventually rejected by a patient's immune system. Once a deceased-donor graft has been rejected, a patient's immune system will reject any subsequent deceased-donor grafts almost immediately.

The current study was designed to investigate whether a resource already available at the MGH might help expand options for protecting burned areas following removal of damaged skin. For more than 30 years David H. Sachs, MD, founder and scientific director of the TBRC, has been investigating ways to allow the human body to accept organ and tissue transplants from animals. Sachs and his team developed a strain of inbred miniature swine with organs that are close in size to those of adult humans.

Since pig organs implanted into primates are rapidly rejected due to the presence of the Gal (alpha-1,3-galactose) molecule, Sachs and his collaborators used the strain that he developed to generate miniature swine in which both copies of the gene encoding GalT (galactosyltransferase), the enzyme responsible for placing the Gal molecule on the cell surface, were knocked out.

When Cetrulo's team used skin from these Gal-free pigs to provide grafts covering burn-like injuries on the backs of baboons – injuries made while the animals were under anesthesia – the grafts adhered and developed a vascular system within 4 days of implantation. Signs of rejection began to appear on day 10, and rejection was complete by day 12 – a time frame similar to what is seen with deceased-donor grafts and identical to that observed when the team used skin grafts from other baboons.

As with the use of second deceased-donor grafts to treat burned patients, a second pig-to-baboon graft was rapidly rejected. But if a pit-to baboon was followed by a graft using baboon skin, the second graft adhered to the wound and remained in place for around 12 days before rejection. The researchers also showed that acceptance of a second graft was similar no matter whether a pig xenograft or a baboon skin graft was used first.

"These results raise the possibility not only of providing an alternative to deceased-donor skin for many patients but also that, in patients whose burns are particularly extensive and require prolonged coverage, sequential use of GalT-knockout and deceased-donor skin could provide extended, high-quality wound coverage," says co-author David Leonard, MBChB, of the TBRC and Division of Plastic and Reconstructive Surgery. "A high-quality alternative to deceased-donor skin that could be produced from a specially maintained, pathogen-free herd of GalT-knockout miniature swine would be an important resource for burn management in both civilian and military settings."

Contacts and sources:
Mike Morrison
Massachusetts General Hospital
on May 27, 2014