Retinal Scanner Fits In A Purse

A person can be identified unambiguously based on his or her retina. Researchers are working to make it possible for anyone to use this technology. With the prototype of a compact, portable retinal scanner, they are one step closer to this vision.

The retina lets us see. However, it also reveals who we are. The blood vessel pattern of the retina is a biometric feature that is different in each human being. Using special eye scanners, a person could give proof of identity safely, securely and unambiguously while on the go. For example, in order to conduct bank transactions, to pay at the supermarket cash register or to unlock the car. However these devices are much too large and cumbersome for mobile use.

Still no smartphone, but quite handy already: the approximately 650 cubic centimeter Fraunhofer IPMS retinal scanner. The researchers display their technology at Optatec 2014. 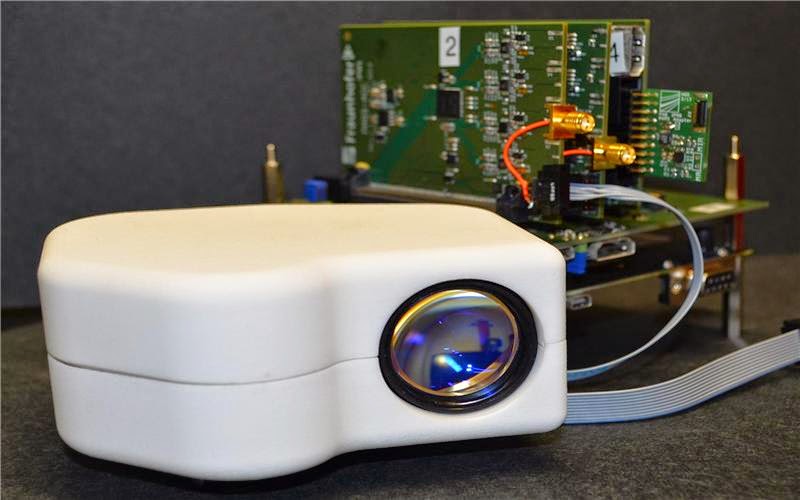 Scientists from the Dresden-based Fraunhofer Institute for Photonic Microsystems IPMS will be demonstrating the prototype of a retinal scanner that is small, ergonomically correct for the human hand and suitable for those who wear eyeglasses at Optatec, the international trade show for optical technologies which takes place from May 20 to 22 in Frankfurt on the Main (Hall 3, Booth D50)

“Based on our research, this device is unique with respect to its compactness,” says Dr. Uwe Schelinski, group manager of Systems Integration at IPMS. Researchers housed the optical components needed to image the retina within a volume of about twelve-by-nine-by-six centimeters. These components include, for example, the infrared laser, the ocular and the MEMS-scanninng mirror (MEMS=Micro-Electro-Mechanical System). Above all, the latter has helped the scientists to put the optical system into such a compact space.

Unique pattern - comparable to a fingerprint

The silicon-based microelectronic components are as small as microchips. They deflect the optically-safe laser beam in a way that makes it possible to scan the retina in a targeted manner and allow the built-in optical instruments to capture an image of the retinal surface from the reflected laser beams. Since the blood vessels of the retina reflect less light than the surrounding photo-receptors, their pattern can be mapped in a graphically distinct way and compared with one of its owner that was previously stored. This pattern is uniquely individual to each human being, just like a fingerprint, the iris, the facial features or the voice, and proves his or her identity.

The portable retinal scanner is the result of the MARS research project sponsored by the BMBF. “MARS” stands for “Mobile Authentication via Retina Scanner.” The system is already mobile – at least, the optical components – thanks to its size. By the end of the project (in December 2014) the scientists also want to have integrated the electronics in such manner that the device is only minimally larger. Concurrently, the last phase of the MARS project deals with improving our understanding of the technology through ex-


perimentation, and with honing the valuation software. The Dresden-based scientists are supported by their colleagues at the Fraunhofer Institute for Systems and Innovation Research ISI in Freiburg. The innovation researchers are responsible on the project for ergonomics, acceptance and the legal aspects of the technology. Other partners include optical and electronics manufacturers, software firms, suppliers of biometric products, security companies and universities.

“It’s still a long way until we can integrate the technology into a smartphone. Another possibility would also be small accessory modules that communicate with the smartphone via Bluetooth, NFC or WLAN. Perhaps that is also the more prudent option in the first stage, since smartphones are still too unsecure,” states Schelinski.

From his viewpoint, the technology has two essential advantages compared to stationary solutions: “First, the scans remain on the device and do not land in a database. Second, I am more willing to scan myself with my own device than with a permanently installed third party system.”

The idea behind this: it is not the retinal comparison itself that is necessary in order to use applications. In fact the device – either the smartphone or the portable scanner – must unambiguously identify the respective owner. If that is the case, then this device itself is the key to access a bank acount, to unlock the car, etc. “Before the technology can conquer the market, we have to build it even more compactly. Our prototype is an important milestone on this path,” says Schelinski.

The scientist, together with his colleagues, will unveil the prototype to the public for the first time at Optatec. Visitors can gain an impression of the compactness of the little handbag-scanner, and get a live demonstration of how the system operates.


Contacts and sources:
Fraunhofer-Gesellschaft
on May 21, 2014