People who claim to see “Jesus in toast” may no longer be mocked in the future thanks to a new study by researchers at the University of Toronto and partner institutions in China.

Researchers have found that the phenomenon of “face pareidolia”– where onlookers report seeing images of Jesus, Virgin Mary, or Elvis in objects such as toasts, shrouds, and clouds — is normal and based on physical causes. 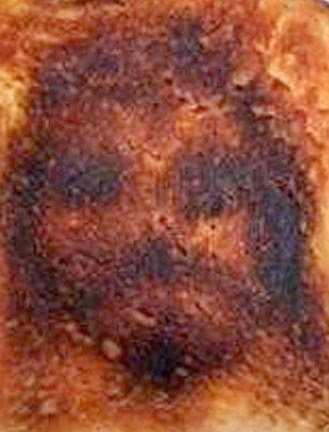 “Most people think you have to be mentally abnormal to see these types of images, so individuals reporting this phenomenon are often ridiculed”, says lead researcher Prof. Kang Lee of the University of Toronto’s Eric Jackman Institute of Child Study. “But our findings suggest that it’s common for people to see non-existent features because human brains are uniquely wired to recognize faces, so that even when there’s only a slight suggestion of facial features the brain automatically interprets it as a face,” said Lee.

Although this phenomenon has been known for centuries, little is understood about the underlying neural mechanisms that cause it. In the first study of its kind, researchers studied brain scans and behavioural responses to individuals seeing faces and letters in different patterns. They discovered face paredilia isn’t due to a brain anomaly or imagination but is caused by the combined work of the frontal cortex which helps generate expectations and sends signals to the posterior visual cortex to enhance the interpretation stimuli from the outside world.

Researchers also found that people can be led to see different images — such as faces or words or letters — depending on what they expect to see, which in turn activates specific parts of the brain that process such images. Seeing “Jesus in toast” reflects our brain’s normal functioning and the active role that the frontal cortex plays in visual perception. Instead of the phrase “seeing is believing” the results suggest that “believing is seeing.”

The research was undertaken by researchers from the University of Toronto, Beijing Jiaotong University, Xidian University, and the Institute of Automation Chinese Academy of Sciences. The findings were published in the journalCortex.


Contacts and sources:
Dominic Ali
University of Toronto
on May 07, 2014