Astrophysicists at UC San Diego have measured the minute gravitational distortions in polarized radiation from the early universe and discovered that these ancient microwaves can provide an important cosmological test of Einstein’s theory of general relativity. These measurements have the potential to narrow down the estimates for the mass of ghostly subatomic particles known as neutrinos.

The UC San Diego astrophysicists employed the HuanTran Telescope in Chile to measure the polarization of the cosmic microwave background. 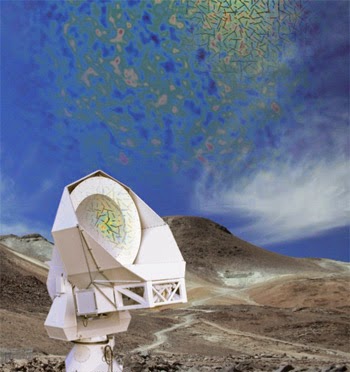 The radiation could even provide physicists with clues to another outstanding problem about our universe: how the invisible “dark matter” and “dark energy,” which has been undetectable through modern telescopes, may be distributed throughout the universe.

The scientists are publishing details of their achievement in the June issue of the journal Physical Review Letters, the most prestigious journal in physics, which highlighted their paper as an “editor’s suggestion” because of its importance and significance to the discipline.

The UC San Diego scientists measured variations in the polarization of microwaves emanating from the Cosmic Microwave Background—or CMB—of the early universe. Like polarized light (which vibrates in one direction and is produced by the scattering of visible light off the surface of the ocean, for example), the polarized “B-mode” microwaves the scientists discovered were produced when CMB radiation from the early universe scattered off electrons 380,000 years after the Big Bang, when the cosmos cooled enough to allow protons and electrons to combine into atoms.

Astronomers had hoped the unique B-mode polarization signature from the early cosmos would allow them to effective “see” portions of the universe that are invisible to optical telescopes as gravity from denser portions of the universe tug on the polarized light, slightly deflecting its passage through the cosmos during its 13.8 billion year trip to Earth. Through a process called “weak gravitational lensing,” the distortions in the B-mode polarization pattern, they hoped, would allow astronomers to map regions of the universe filled with invisible “dark matter” and “dark energy” and well as provide a test for general relativity on cosmological scales.

The recent discovery confirms both hunches. By measuring the CMB polarization data provided by POLARBEAR, a collaboration of astronomers working on a telescope in the high-altitude desert of northern Chile designed specifically to detect “B-mode” polarization, the UC San Diego astrophysicists discovered weak gravitational lensing in their data that, they conclude, permit astronomers to make detailed maps of the structure of the universe, constrain estimates of neutrino mass and provide a firm test for general relativity.

“This is the first time we’ve made these kinds of measurements using CMB polarization data,” said Chang Feng, the lead author of the paper and a physics graduate student at UC San Diego who conducted his study with Brian Keating, an associate professor of physics at the university and a co-leader of the POLARBEAR experiment. “This was the first direct measurement of CMB polarization lensing. And the amazing thing is that the amount of lensing that we found through these calculations is consistent with what Einstein’s general relativity theory predicted. So we now have a way to verify general relativity on cosmological scales.”

The POLARBEAR experiment examined a small (30 degree square) region of the sky to produce high resolution maps of B-mode polarization, which enabled the team to determine that the amplitude of gravitational fluctuations they measured was consistent with the leading theoretical model of the universe, known as the Lambda Cold Dark Matter cosmological model. Another team Keating’s group collaborates with, based at the Harvard-Smithsonian Center for Astrophysics, called BICEP2, used a telescope at the South Pole to examine B-mode polarization across wide swaths of the sky. In March, it announced it had found evidence for a brief and very rapid expansion of the early universe, called inflation.

One of the most important questions in physics that can be addressed from these data is the mass of the weakly interacting neutrino, which was thought to have no mass, but current limits indicate that neutrinos have masses below 1.5 electron volts. Feng said the B-mode polarization data in his study, while consistent with the predictions of general relativity, are not statistically significant enough yet to make any firm claims about neutrino masses. But over the next year, he and Keating hope to analyze enough data from POLARBEAR, and its successor instrument — the Simons Array— to provide more certainty about the masses of neutrinos.

“This study is a first step toward using polarization lensing as a probe to measure the mass of neutrinos, using the whole universe as a laboratory,” Feng said.

"Eventually we will be able to put enough neutrinos on a ‘scale’ to weigh them—precisely measuring their mass,” Keating says. “Using the tools Chang has developed, it’s only a matter of time before we can weigh the neutrino, the only fundamental elementary particle whose mass is unknown. That would be an astounding achievement for astronomy, cosmology and physics itself.”

The study was supported by grants from the National Science Foundation, National Aeronautics and Space Administration, the Simons Foundation, and Irwin and Joan Jacobs.

Contacts and sources:
Kim McDonald
University of California - San Diego
on May 15, 2014