Research from CLOUD experiment at CERN, which includes Carnegie Mellon’s Neil Donahue, Contributes to better understanding of connection between clouds and climate

Clouds play a critical role in Earth’s climate. Clouds also are the largest source of uncertainty in present climate models, according to the latest report of the Intergovernmental Panel on Climate Change. Much of the uncertainty surrounding clouds’ effect on climate stems from the complexity of cloud formation. 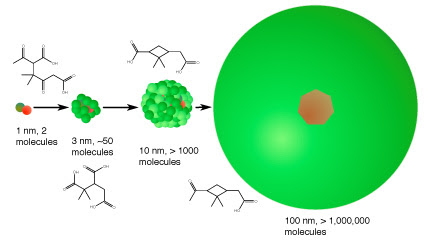 New research from scientists at the CLOUD (Cosmics Leaving OUtdoor Droplets) experiment atCERN, including Carnegie Mellon University’s Neil Donahue, sheds light on new-particle formation — the very first step of cloud formation and a critical component of climate models. The findings, published in the May 16 issue of Science, closely match observations in the atmosphere and can help make climate prediction models more accurate.

Cloud droplets form when water vapor in the atmosphere condenses onto tiny particles. These particles are emitted directly from natural sources or human activity, or they form from precursors emitted originally as gaseous pollutants. The transformation of gas molecules into clusters and then into particles, a process called nucleation, produces more than half of the particles that seed cloud formation around the world today. But the mechanisms underlying nucleation remain unclear.

“Our measurements connect oxidized organics directly, and in detail, with the very first steps of new particle formation and growth,” said Donahue, professor of chemistry, chemical engineering, engineering and public policy, and director of CMU’s Steinbrenner Institute for Environmental Education and Research. “We had no idea a year ago that this chemistry was happening. There’s a whole branch of oxidation chemistry that we didn’t really understand. It’s an exciting time.”

The air we breathe is chock-full of organic compounds, tiny liquid or solid particles that come from hundreds of sources including trees, volcanoes, cars, trucks and wood fires. Once they enter the atmosphere, these so-called organics start to change. In research published in the Proceedings of the National Academy of Sciences in 2012, Donahue and colleagues showed conclusively that organic molecules given off by pine trees, called alpha-pinene, are chemically transformed multiple times in the highly oxidizing environment of the atmosphere.

Additionally, other research, including from Donahue’s lab, has suggested that such oxidized organics might take part in nucleation — both in new particle formation and in their subsequent growth. Donahue and an international team of researchers with the CLOUD experiment at CERN set out to test that hypothesis.

The CLOUD project at CERN is a unique facility that allows scientists to reproduce a typical atmospheric setting inside of an essentially contaminant-free, stainless steel chamber. By performing experiments in the precisely controlled environment of the CLOUD chamber, the project’s scientists can change the concentrations of chemicals involved in nucleation and then measure the rate at which new particles are created with extreme precision.

In the current work, the team filled the chamber with sulfur dioxide and pinnanediol (an oxidation product of alpha-pinene) and then generated hydroxyl radicals (the dominant oxidant in Earth’s atmosphere). Then they watched the oxidation chemistry unfold. Using very high-resolution mass spectrometry, the scientists were able to observe particles growing from single, gaseous molecules to clusters of up to 10 molecules stuck together, as they grew molecule by molecule.

“It turns out that sulfuric acid and these oxidized organic compounds are unusually attracted to each other. This remarkably strong association may be a big part of why organics are really drawn to sulfuric acid under modern polluted conditions,” Donahue said.

After confirming that oxidized organics are involved in the formation and growth of particles under atmospheric conditions, the scientists incorporated their findings into a global particle formation model. The fine-tuned model not only predicted nucleation rates more accurately but also predicted the increases and decreases of nucleation observed in field experiments over the course of a year, especially for measurements near forests. This latter test is a strong confirmation of the fundamental role of emissions from forests in the very first stage of cloud formation, and that the new work may have succeeded in modeling that influence.


Contacts and sources:
By: Jocelyn Duffy
Carnegie Mellon University
on May 17, 2014