Wolf-Rayet stars are very large and very hot. Astronomers have long wondered whether Wolf-Rayet stars are the progenitors of certain types of supernovae. New work from the Palomar Transient Factory team, including Carnegie's Mansi Kasliwal, is homing in on the answer. They have identified a Wolf-Rayet star as the likely progenitor of a recently exploded supernova. This work is published by Nature. 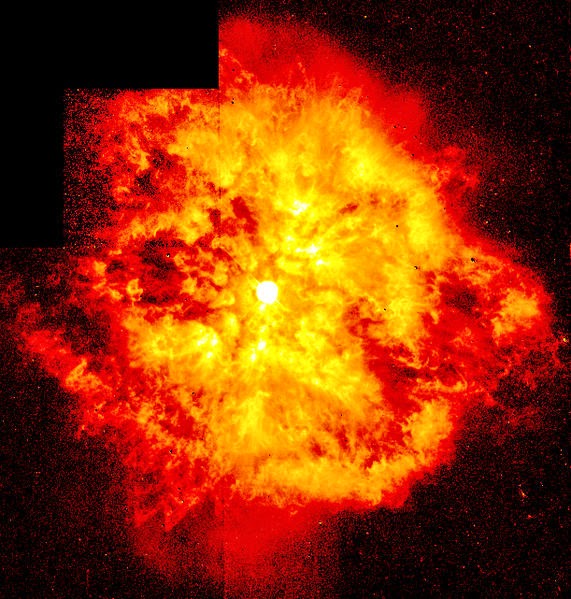 Wolf-Rayet stars are notable for having strong stellar winds and being deficient in hydrogen when compared with other stars. Taken together, these two factors give Wolf-Rayet stars easily recognizable stellar signatures.

It is thought that Wolf-Rayet stars explode as type IIb, Ib or Ic supernovae. Yet, direct evidence linking these types of supernovae to their progenitor stars has heretofore been missing.

The team, led by Avishay Gal-Yam of the Weizmann Institute of Science in Israel, applied a novel observational method called flash spectroscopy to identify the likely progenitor of a type IIb supernova called SN 2013cu just over 15 hours after it exploded.

"This supernova was discovered by the Palomar 48-inch telescope in California. The on-duty PTF team member in Israel promptly sounded an alert about this supernova discovery enabling another PTF team member to get a spectrum with the Keck telescope before the sun rose in Hawaii," Kasliwal explained. "The global rapid response protocol ensures the sun never rises for the PTF team!"

When the supernova exploded, it flash ionized its immediate surroundings, giving the astronomers a direct glimpse of the progenitor star's chemistry. This opportunity lasts only for a day before the supernova blast wave sweeps the ionization away. So it's crucial to rapidly respond to a young supernova discovery to get the flash spectrum in the nick of time.

The observations found evidence of composition and shape that aligns with that of a Nitrogen-rich Wolf-Rayet star. What's more, the progenitor star likely experienced an increased loss of mass shortly before the explosion, which is consistent with model predictions for Wolf-Rayet explosions. These techniques shed fresh light on the poorly understood evolution of massive stars.

Previously when looking for a pre-explosion star using the Hubble Space Telescope, astronomers could only look over a range of about 20 megaparsecs. But using these new tools they can increase that distance by a factor of five, allowing them to identify many more supernovae progenitors.

The Palomar Transient Factory collaboration is led by Shri Kulkarni of the California Institute of Technology. PTF has discovered more than 2000 supernovae during its four and a half years of observations, including many rare and exotic types of cosmic outbursts.

The intermediate Palomar Transient Factory (iPTF)—led by the California Institute of Technology (Caltech)—started searching the skies for certain types of stars and related phenomena in February. The iPTF was built on the legacy of the Palomar Transient Factory (PTF), designed in 2008 to systematically chart the transient sky by using a robotic observing system mounted on the 48-inch Samuel Oschin Telescope on Palomar Mountain near San Diego, California. iPTF is a scientific collaboration among the California Institute of Technology, Los Alamos National Laboratory, the University of Wisconsin, Milwaukee, the Oskar Klein Center, the Weizmann Institute of Science, the TANGO Program of the University System of Taiwan, and the Kavli Institute for the Physics and Mathematics of the Universe.

The Carnegie Institution for Science is a private, nonprofit organization headquartered in Washington, D.C., with six research departments throughout the U.S. Since its founding in 1902, the Carnegie Institution has been a pioneering force in basic scientific research. Carnegie scientists are leaders in plant biology, developmental biology, astronomy, materials science, global ecology, and Earth and planetary science.