A deep-water creature once thought to be one of the world’s largest sea anemones, with tentacles reaching more than 6.5 feet long, actually belongs to a new order of animals. The finding is part of a new DNA-based study led by the American Museum of Natural History that presents the first tree of life for sea anemones, a group that includes more than 1,200 species. The report, which was published this week in the journal PLOS ONE, reshapes scientists’ understanding of the relationships among these poorly understood animals.

This unidentified specimen belonging within Relicanthidae is a sea creature that was previously thought to be a giant sea anemone (order Actiniaria). New research places this animal in a new order—a classification equal to Carnivora in mammals or Crocodilia in reptiles. The species, which lives near hydrothermal vents, has tentacles reaching more than 6.5 feet long. 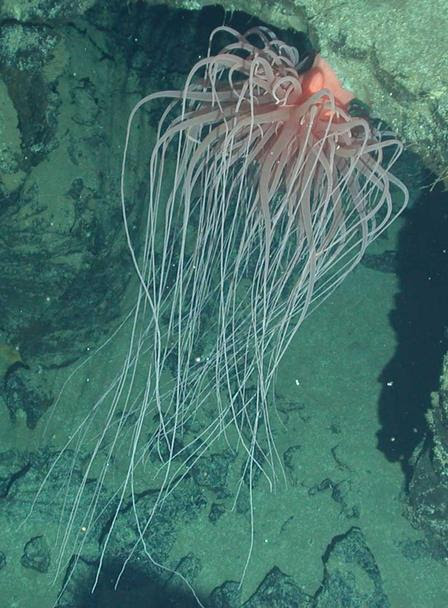 “The discovery of this new order of Cnidaria—a phylum that includes jellyfish, corals, sea anemones, and their relatives—is the equivalent to finding the first member of a group like primates or rodents,” said Estefanía Rodríguez, an assistant curator in the Museum’s Division of Invertebrate Zoology and the lead author of the new publication. “The difference is that most people are far more familiar with animals like chimpanzees and rats than they are with life on the ocean floor. But this amazing finding tells us that we have so much more to learn and discover in the ocean.”

Estefanía Rodríguez, an assistant curator in the American Museum of Natural History’s Division of Invertebrate Zoology and the lead author of the new study, collects shallow-dwelling sea anemones on a recent expedition to South Africa. 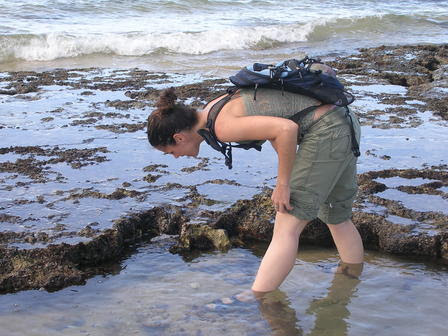 Rodríguez, along with an international team of researchers, conducted a four-year study to organize sea anemones in a “natural,” or phylogenetic, way, based on their evolutionary relationships. Sea anemones are stinging polyps that spend most of their time attached to rocks on the sea floor or on coral reefs. Although they vary greatly in size and color, anemones have very few defining structures. As a result, classifying these animals based on morphology alone can be difficult. 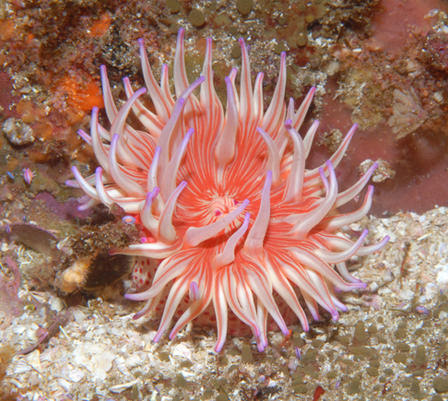 “Anemones are very simple animals,” Rodríguez said. “Because of this, they are grouped together by their lack of characters—for example, the absence of a skeleton or the lack of colony-building, like you see in corals. So it wasn’t a huge surprise when we began to look at their molecular data and found that the traditional classifications of anemones were wrong.”

The researchers compared particular sections of DNA of more than 112 species of anemones collected from oceans around the world. Based on genetic data and the organization of their internal structures, the scientists reduced the sub-orders of anemones from four to two.

They also discovered that one of species that they analyzed is not a sea anemone at all. This animal, previously called Boloceroides daphneae, was discovered in 2006 in the deep east Pacific Ocean and labeled as one of the largest sea anemones in existence. But the new study shifts it outside of the tree of life for anemones. Instead, the researchers placed it in a newly created order—a classification equal to Carnivora in mammals or Crocodilia in reptiles—under the sub-class Hexacorallia, which includes stony corals, anemones, and black corals. The new name of the animal, which lives next to hydrothermal vents, isRelicanthus daphneae.

This figure shows the new phylogenetic reconstruction of the sub-class Hexacorallia, which includes stony corals, anemones, and black corals. The position of Relicanthus daphneae, previously thought to be a giant sea anemone, was found to be outside of that group, in a new order of animals. 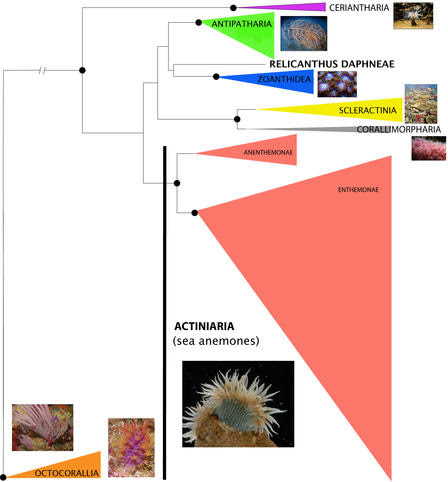 Relicanthus daphneae is a classic example of convergent evolution, the independent evolution of similar features in species of different lineages.

“Even though this animal looks very much like a sea anemone, it is not one,” Rodríguez said. “Both groups of animals lack the same characters, but our research shows that while the anemones lost those characters over millions of years of evolution, R. daphneaenever had them. Putting these animals in the same group would be like classifying worms and snakes together because neither have legs.”

For now, Relicanthus daphneae is the only species in the new order, but researchers hope to change that. “Although we’ve long known about the existence of this giant animal, it’s only in recent years that we’re really starting to understand where it fits into the tree of life,” Rodríguez said. “So imagine what else is still out there to discover.”