Some Ecuadorian tribes were famous for making mummified shrunken heads from the remains of their conquered foes. Field work in the cloud forests of Ecuador by Professor Scott Shaw, University of Wyoming, Laramie, and colleagues, has resulted in the discovery of 24 new species of Aleiodes wasps that mummify caterpillars. The research by Eduardo Shimbori, Universidade Federal de São Carlos, Brazil, and Scott Shaw, was recently published in the open access journal ZooKeys.


The new insect species were named after Shakira and Jimmy Fallon

This is a side view of the Shakira wasp, Aleiodes shakirae. The golden dot on the lower right is the head of a pin. 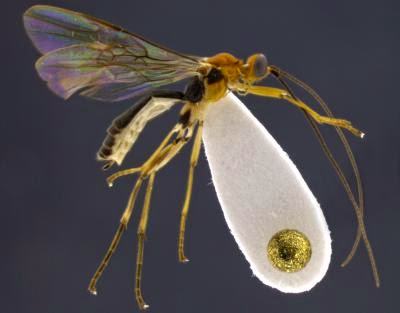 Among the 24 new insect species described by Shimbori and Shaw, several were named after famous people including the comedians and television hosts Jimmy Fallon, John Stewart, Stephen Colbert, and Ellen DeGeneres, as well as the Ecuadorian artist Eduardo Kingman, American poet Robert Frost, and Colombian singer and musician, Shakira.

The Shakira wasp causes its host caterpillar to bend and twist in an unusual way, which reminded the authors of belly-dancing, for which the South American performer is also famous. In a previous work, Shaw had named a species after David Letterman.

This is a mummified host caterpillar with abdominal bending, parasitized by the Shakira wasp. "These wasps are very small organisms, being only 4 to 9 millimeters long, but they have an enormous impact on forest ecology," Shaw said. Aleiodeswasps are parasites of forest caterpillars. The female wasps search for a particular kind of caterpillar, and inject an egg into it. Parasitism by the wasp does not immediately kill the caterpillar, but it continues to feed and grow for a time. Eventually, feeding by the wasp larva causes the host caterpillar to shrink and mummify, then the immature wasp makes its cocoon inside the mummified remains of its conquered prey.

When it completes its development, the young wasp cuts an exit hole from the caterpillar mummy and flies away to mate, and continue this cycle of parasitic behavior. "Killing and mummifying caterpillars may sound bad, but these are actually highly beneficial insects," Shaw says. "These wasps are helping to naturally control the populations of plant-feeding caterpillars, so they help to sustain the biodiversity of tropical forests."

This is a side view of the Jimmy Fallon wasp, Aleiodes falloni. Shaw tells more about the behavior of parasitic wasps and other insects in his forthcoming book, Planet of the Bugs, due to be published by the University of Chicago Press in September.

The field research was conducted by Shaw at the Yanayacu cloud forest research station of Napo Province, in the eastern Andes slopes of Ecuador. Previous research by Shaw had discovered nine species of mummy-making wasps at the site, and others are known from around the world, but the full extent of these insect's biodiversity in Ecuador did not become apparent until recently, when Shimbori and Shaw collaborated to name them all. The research was supported by a grant from the National Science Foundation, called Caterpillars and Parasitoids of the Eastern Andes.