In a joint effort with collaboration partners from the Vienna University of Technology and a lab in the USA, the team of Andrew Straw at the IMP developed a special device for the thermogenetic control of flies. This tool, called FlyMAD, enabled the scientists to target light or heat to specific body regions of flies in motion and to analyse the animals‘ brain cells.

Compared to other techniques, FlyMAD allows highly improved temporal resolution. Using the new technology, Straw and his colleagues got new insight into the role of two neuronal cell types in courtship behavior of flies. The results of the study will be published online in Nature Methods on May 25 (doi 10.1038/nmeth.2973).

This composite image shows a laser being aimed at a walking fly using the FlyMAD system. 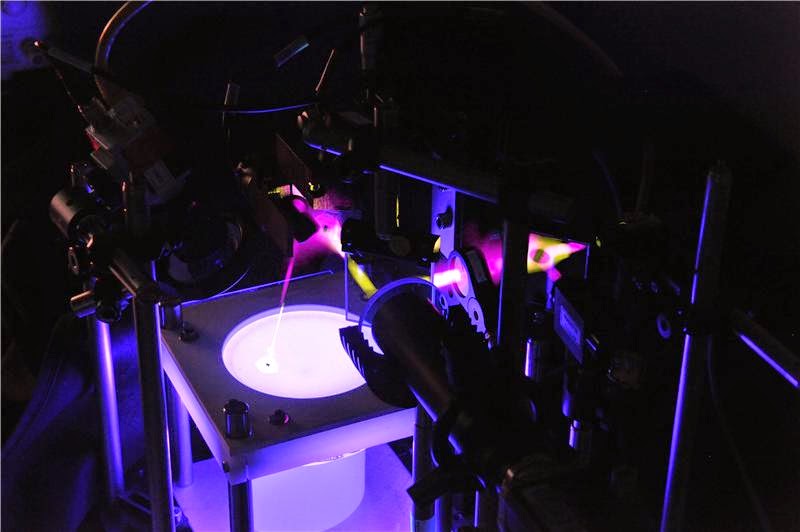 The fruit fly Drosophila Melanogaster represents an ideal experimental system to analyse circuit functions of brain cells (neurons). In the past, it was not possible to specifically control the activity of neurons in moving flies. Andrew Straw and his team have now overcome this barrier.

Straw and his co-workers are interested in the mechanisms underlying cell circuits in the fly brain. Straw’s group concentrates on the control of complex behaviors such as courtship. In order to better understand how different neuronal circuits work together, Straw and his team developed FlyMAD (“Fly Mind Altering Device”), an apparatus using a video camera to track the flies‘ motion in a box. FlyMAD allows simultaneous observation of several flies and targeted irradiation of specific body regions of these animals. By combining the sensitive methods of optogenetics and thermogenetics, the researchers were able to specifically alter neural pathways in the fly brain with FlyMAD.

The novel technology of thermogenetics uses genetically modified, temperature-sensitive flies. Upon irradiation with infrared light and the concomitant rise in temperature to 30 degrees Celsius, these animals change certain aspects of their behavior. This does not happen at a control temperature of 24 degrees Celsius. Compared to other commonly used methods, FlyMAD applies a highly improved temporal resolution. Infrared-induced activation or repression of specific neurons and the following change in the animals‘ behavior occur within the fraction of a second.

A male Drosophila raises a wing and ‘sings’ due to neuronal activation of song neurons. FlyMAD enables precisely aiming an infrared laser at a fly in which a warmth-sensitive ion channel was genetically introduced into previously identified neurons. 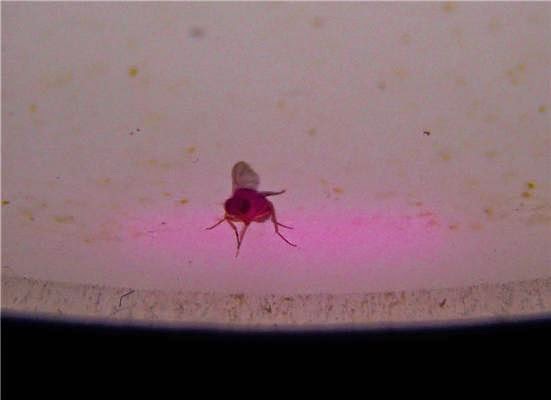 The application of visible light to certain genetically engineered flies can also induce alterations of their brain. FlyMAD thus represents an absolute novelty for fly research, as optogenetics has been restricted to mice so far.

Straw and his co-workers tested FlyMAD by analyzing already known reactions of genetically modified flies to light and heat. As this proof-of-principle showed that FlyMAD worked reliably – for example by making the flies “moonwalk” - the researchers went on to use their method to tackle new scientific questions.

In a thermogenetic set up, they investigated a certain type of neurons that had been linked to the flies’ courtship song in earlier experiments. Taking advantage of the better temporal resolution of FlyMAD, the scientists were able to characterize the role of two neuronal cell types in the brain in more detail.

They could show that activity of one type of neurons correlated with a persistent state of courtship, whereas the other cell type was important for the action of “singing”. In the experiment this became obvious when males tried to mate with a ball of wax, circled it and started vibrating their wings after stimulation with the laser beam.

In the future, Straw wants to combine the activation of flies both by light and by heat in one experiment – that is feasible with FlyMAD. This would allow the activation or repression of different genetic elements in one fly.

"FlyMAD offers the fantastic opportunity to address many of our questions. We could, for example, analyze how single neurons function in a cascade within the neuronal circuit“, Straw emphasizes the potential of his work. Ultimately, new insight into the function of the fly brain can also be applied to the network of cells in the mammalian brain.