A study co-headed by Josep Lluís Araus, professor from the University of Barcelona (UB), Juan Pedro Ferrio, Ramón y Cajal researcher at Agrotecnio of the University of Lleida (UdL), and Jordi Voltas, professor from Agrotecnio, describes the characteristics of agriculture at its beginnings by comparing kernel and wood samples from ancient Near East sites —the birthplace of Western agriculture— with present samples. 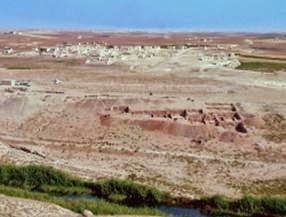 It is the first time that direct evidences enable to know humidity and fertility conditions of crops, as well as the process of cereal domestication developed by humans from the Neolithic (12,000 years ago) to early Roman times (around 2,000 years ago).

The study has been published in the journal Nature Communications. Researchers Ramon Buxó, archaeologist and director of the Archaeological Museum of Catalonia-Girona, and Mònica Aguilera, UdL researcher who is now working at the Paris Natural History Museum, participated in the study too.

Researchers used crop physiology techniques to analyse archaeobotanical remains. In total, they analysed 367 kernels —for instance, barley and wheat—, and 362 wood samples obtained in eleven archaeological sites from Upper Mesopotamia, which includes present south-eastern Turkey and northern Siria, to the Near East. Studied kernels belong to present crops of wheat and barley species that are similar to the archaeological remains found in the region.

Researchers compared the size of kernel remains with present samples to determine the evolution of crop domestication. “The methodology used to date does not reproduce real size; it measures width and long of charred kernels”, explains Josep Lluís Araus, professor from the Department of Plan Biology of UB. “We have reconstructed cereal kernel weight —adds the expert— and seen that it increased for a longer period of time than it was thought, probably during several millenniums”. According to the researcher, the initial selection of kernel was “unconscious”, in other words, first farmers selected the biggest kernels, so size increased progressively.

Sample analysis of carbon and nitrogen isotope compositions —a technique used in crop physiology and improvement— was a key factor to describe the conditions of the area. On one hand, “Carbon isotope composition enables to evaluate water availability for crops. It reached its maximum level 9,000 years ago, and then it decreased progressively until the beginning of our times”, points out Araus. In any case, researchers have not found conclusive evidences about the use of irrigation as a common practice. “This information together with cereal kernel weight allows assessing the productivity of ancient crops”, highlights Josep Lluís Araus.

On the other hand, nitrogen isotope composition provides information about soil’s organic matter and fertility. Juan Pedro Ferrio (Agrotecnio-UdL) affirms that “although they were dryland crops, it can be affirmed that nitrogen was much more available than today: undoubtedly, soils were much more fertile than nowadays”. Moreover, it can be observed a progressive decrease of soil fertility, probably due to over-exploitation or the use of less fertile soils, but also to more extreme climate conditions.

These data enable to describe more precisely agronomic conditions and the evolution of human populations linked to agricultural practices. “The study relates conditions like water availability or soil fertility to crops yield”, states Josep Lluís Araus. Past yields, compared with average calorie needs of one person, enable, for example, to have a rough idea of the crop area needed to feed the population. “This information —adds Araus— can be used to know more precisely the borders of past settlements and the evolution of human communities. The aim is to include all this information in models in order to better understand the past”, concludes the researcher.


Contacts and sources:
University of Barcelona