The ocean is blue because red light is swiftly absorbed by the water. That’s why even a few meters below the surface, the sea and its creatures appear a dull blue color. Evolutionary biologists at the University of Tübingen are carrying out research into marine fish which have developed their own biofluorescence - producing bright red colors in the blue depths of the sea.

The red-eye wrasse produces deep red biofluorescence to communicate and defend his territory. 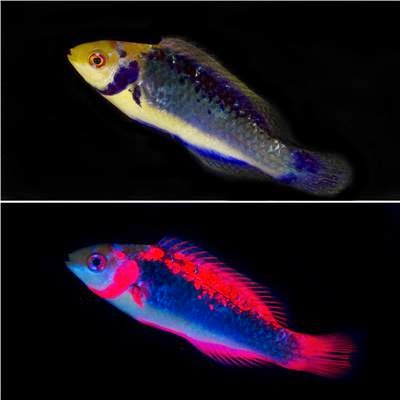 In the latest Proceedings of the Royal Society B, they demonstrate for the first time that fish are able to perceive their own biofluorescence and to use if to communicate with members of their own species.

Dr Tobias Gerlach, Dr Dennis Sprenger and Professor Nico Michiels from Tübingen’s Institute of Evolution and Ecology made use of the fact that the male of the red-eye wrasse, Cirrhilabrus solorensis, reacts aggressively towards his own reflection in a mirror.

In one experiment, a filter placed in front of the mirror blocked the fluorescent part of the fish’s coloration - with the result that males were far less interested in their mirror image. The researchers say this shows that the red-eye wrasse not only recognizes its species’ special coloration - it also uses it as a territorial marker and displays it in conflicts with other males.

One of the most exciting discoveries, the researchers say, is that the fluorescence is a deep red in a part of the spectrum which, it was previously believed, fish could not see or make use of. It could be that red-eye wrasses use their fluorescence as a private frequency to communicate amongst themselves.