A Case Western Reserve University student and his mentor have discovered an ancient kitten-sized predator that lived in Bolivia about 13 million years ago—one of the smallest species reported in the extinct order Sparassodonta.

This is a view of the palate of the new, small sparassodont from Bolivia. The front end is to the right. The scale bar is 1 cm.

Credit: Rick Wherley of the Cleveland Museum of Natural History

"The animal would have been about the size of a marten, a catlike weasel found in the Northeastern United States and Canada, and probably filled the same ecological niche," said Engelman, an evolutionary biology major from Russell Township, Ohio.

The researchers refrained from naming the new species mainly because the specimen lacks well-preserved teeth, which are the only parts preserved in many of its close relatives.

The skull, which would have been a little less than 3 inches long if complete, shows the animal had a very short snout. A socket, or alveolus, in the upper jaw shows it had large, canines, that were round in cross-section much like those of a meat-eating marsupial, called the spotted-tailed quoll, found in Australia today, the researchers said.

Although sparassodonts are more closely related to modern opossums than cats and dogs, the group included saber-toothed species that fed on large prey. This small Bolivian species probably fed on the ancient relatives of today's guinea pigs and spiny rats, the researchers said.

"Most predators don't go after animals of equal size, but these features indicate this small predator was a formidable hunter," Croft said.

This shows skulls of several species of sparassodonts, including three large short-snouted forms (left), two smaller fox-like species (middle), and a reconstruction of the specimen described in the paper (far right). The site where this specimen was found can be seen in the background. 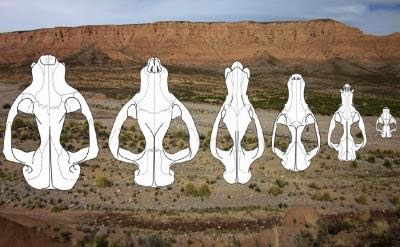 Credit: Illustrations by Russell Engelman and photo by Darin Croft.

The specimen had not been studied in detail after being collected. It was provisionally identified as belonging to a particular group of extinct meat-eating opossums, due in part to its small size. Further adding to the identity challenge, almost all small sparassodonts have been identified by their teeth and lower jaws, which this skull lacks.

Croft wanted to study the skull because its age is nearly twice that of the oldest known species of meat-eating opossum. The specimen was found in a mountainous site known as Quebrada Honda, Bolivia, in 1978, in rock layers dated 12 million to 13 million years ago.

Structurally, extinct meat-eating opossums and sparassodont skulls share a number of similarities due to their similar meat-eating diet, Engelman said.

"No single feature found in the skull was so distinctive that we could say one way or the other what it was," Croft said, "but the combination of features is unique and says this is a sparassodont."

One key was that a particular bone of the orbit, the boney socket of the eye, does not touch the nasal bone in an opossum but does in a sparassodont.

The short snout was a kind of red herring. While jaguar-sized sparassodonts had them, the smaller members of the order had fox-like faces. And this species was smaller than most of those.

These smaller sparassodonts also have gaps between their teeth that are absent in most larger species. The skull shows no gaps.

Overall, the animal's features are a mixture of those found in different species of sparassodonts, but are not characteristic of in any one subgroup within the order. That puts this species near the bottom of the family tree, the researchers said.

Croft, who regularly collects from the same site where the skull was found, will return there this summer to gather evidence he hopes will show whether this species lived in an open grassland, forest or mixed habitat.

He also hopes to find the lower jaw, which may enable direct comparisons with known species and provide enough foundation to name the animal.