The team used the new system to simultaneously image the activity of every neuron in the worm Caenorhabditis elegans, as well as the entire brain of a zebrafish larva, offering a more complete picture of nervous system activity than has been previously possible.

Head region and the majority of the brain of a zebrafish larvae, as recorded and reconstructed using the light-field microscope 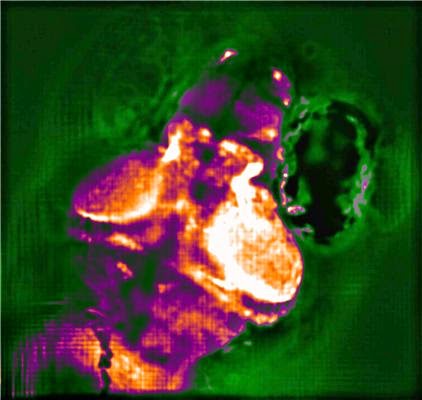 “The new method is an indispensible tool to understand how the brain represents and processes sensory information and how this leads to cognitive functions and behaviour,” says physicist Alipasha Vaziri, a joint group leader at the IMP and MFPL and head of the research platform „Quantum Phenomena & Nanoscale Biological Systems“ (QuNaBioS) of the University of Vienna, who led the project. “Because of the enormous density of the interconnection of nerve cells in the brain, relevant information is often encoded in states of this densely interconnected network of neurons rather than in the activity of individual neurons.”

Vaziri’s team developed the brain-mapping method together with researchers in the lab of Edward Boyden, an associate professor of biological engineering and brain and cognitive sciences at the Massachusetts Institute of Technology.

Neurons encode information - sensory data, motor plans, emotional states, and thoughts - using electrical impulses called action potentials, which provoke calcium ions to stream into each cell as it fires. By engineering model organisms that carry fluorescent proteins which glow when they bind calcium, scientists can visualize this electrical firing of neurons in live animals. However, until now there has been no way to image this neural activity over a large volume, in three dimensions, and at high speed.

Scanning the brain with a laser beam can produce 3-D images of neural activity, but it takes a long time to capture an image because each point must be scanned individually. The research-team wanted to achieve similar 3-D functional images but accelerate the process so they could see neuronal firing, which takes only milliseconds, as it occurs.


The new method is based on a technology known as light-field imaging, which creates 3-D images by capturing angular information of incoming rays of light. In the new paper, the researchers in Vienna and Cambridge built a light-field microscope which was optimized to have single neuron resolution and applied it, for the first time, to imaging of neural activity.

With this kind of microscope, the light emitted by the sample is sent through an array of lenses that refracts the light in different directions. Each point of the sample generates about 400 different points of light, which can then be recombined using a computer algorithm to recreate 3-D structures.

“Compared to existing methods, our new technology allows us to capture neuronal activity in volumes up to a thousand times larger at ten times higher speed”, says Robert Prevedel, a postdoc in the Vaziri Lab and first author of the paper. ”We have eliminated the need to scan multiple layers, thus the temporal resolution is only limited by the camera sensor and the properties of the molecules themselves.” Prevedel built the microscope at the IMP in Vienna. Young-Gyu Yoon, a graduate student at MIT and co-first author, devised the computational strategies that reconstruct the 3-D images.

The researchers used the technique to image neural activity in the worm C. elegans, the only organism for which the entire neural wiring diagram is known. This one-millimeter worm has 302 neurons, each of which the researchers imaged as the worm performed natural behaviors, such as crawling.

To demonstrate the power of the new technology in higher organisms, they also studied larvae of zebrafish. Their nervous system consists of over 100 000 neurons that fire at a much faster rate, rather like humans. In the tiny larvae, the scientists were able to induce neuronal response to odor stimuli in around 500 neurons and track the nerve signals simultaneously in about 5000 activated neurons.

The findings could be ultimately useful in developing new types of algorithms that simulate functions of the brain and predict behaviour. Such models are in high demand in the area of machine learning and object recognition and classification.

The work in Vienna was funded by the Vienna Science and Technology Fund (WWTF), the Research Platform Quantum Phenomena and Nanoscale Biological Systems (QuNaBioS), the Human Frontiers Science Program, the European Commission, the VIPS Program of the Austrian Federal Ministry of Science and Research,the City of Vienna, and the Vienna Scientific Cluster (VSC).The IMP is funded by Boehringer Ingelheim.