Scientists at NASA and the University of California, Irvine (UCI), have found that canyons under Greenland's ocean-feeding glaciers are deeper and longer than previously thought, increasing the amount of Greenland's estimated contribution to future sea level rise. 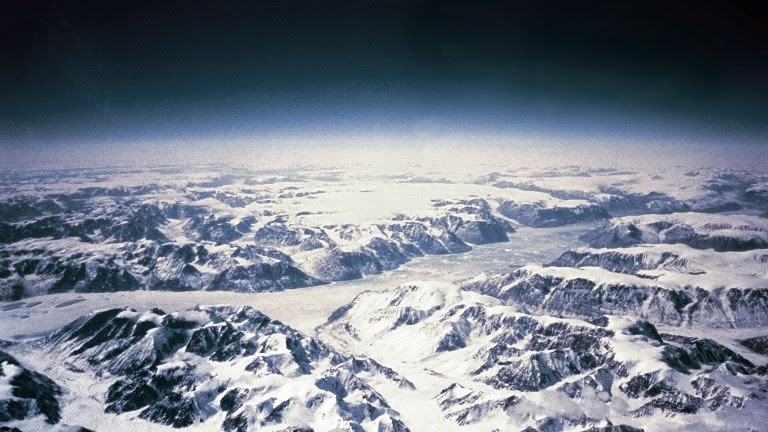 "The glaciers of Greenland are likely to retreat faster and farther inland than anticipated, and for much longer, according to this very different topography we have discovered,” said Mathieu Morlighem, a UCI associate project scientist who is lead author of the new research paper. The results were published Sunday in the journal Nature Geoscience.

New maps of the bedrock beneath Greenland’s ice sheet (right) have found long, deep canyons that are likely to cause ocean-feeding glaciers (left) to retreat faster and farther inland than previously thought.

Ice loss from Greenland has accelerated during the last few decades. However, older ice sheet models predicted the speedup would be temporary because the glaciers would soon melt back onto higher ground and stabilize. The models projected that Greenland's contribution to global sea level rise would therefore be limited.

Morlighem's new topography shows southern Greenland's ragged, crumbling coastline is scored by more than 100 canyons beneath glaciers that empty into the ocean. Many canyons are well below sea level as far as 60 miles (100 kilometers) inland. Higher ground, where glaciers could stabilize, is much farther from the coastline than previously thought. The finding calls into question the idea that the recent accelerated ice loss will be short lived.

Buried under the Greenland Ice Sheet, the subcontinent's bedrock topography has been estimated using soundings from ice-penetrating radar. However, the wet and fractured ice along the southern coastline cluttered the radar soundings so that large swaths of the bed remained invisible. To overcome that problem, Morlighem and his colleagues devised an advanced technique to create a more accurate map. The technique makes the best use of several kinds of data: ice thickness measurements derived from airborne radar; satellite radar interferometry data on the speed and direction of ice movement: and estimates of snowfall and surface melt to the sea. By combining the different types of data, they were able to map the bed topography along Greenland's margins with unprecedented precision and detail.

"We have been able to make a quantum leap in our knowledge of bed topography beneath ice sheets in the last decade, thanks to the advent of missions like NASA's Operation IceBridge in combination with satellite data on the speed these ice sheets are flowing," said coauthor Eric Rignot of UCI and NASA's Jet Propulsion Laboratory (JPL), Pasadena, California.

An animation of the newly mapped bed topography is available at:

The California Institute of Technology, Pasadena, manages JPL for NASA.

NASA monitors Earth's vital signs from land, air and space with a fleet of satellites and ambitious airborne and ground-based observation campaigns. NASA develops new ways to observe and study Earth's interconnected natural systems with long-term data records and computer analysis tools to better see how our planet is changing. The agency shares this unique knowledge with the global community and works with institutions in the United States and around the world that contribute to understanding and protecting our home planet.

Janet Wilson
University of California, Irvine
on May 20, 2014