The sting of the Irukandji jellyfish, part of what is commonly called the 'box jellyfish' family, can be fatal. At best, being stung causes painful cramping and people may need hospitalisation, suffering from what is known as Irukandji Syndrome. Unfortunately the jellyfish are tiny, transparent, and when they arrive near the coastline they come in blooms numbering hundreds of thousands. Until now the first sign that the Irukandji are in the water nearby are the cries of people being stung.

A report just published in Interface, the Journal of the Royal Society, sets out a study into how blooms can be predicted. Lead author Lisa-Ann Gershwin said, 'They travel in very, very large numbers. It's not uncommon to have dozens of stings on a beach in a day. The jellyfish bodies and tentacles are invisible in water - it's like a diamond dropped into a glass of water - you just can't see them.' 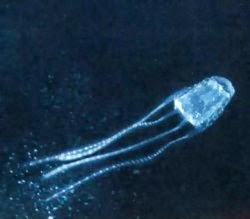 Although the blooms can occur anywhere, from Wales to Melbourne, the researchers in this study focused on the Great Barrier Reef. They compared a sting database containing records collected between 1985 and 2012 with medium-range weather forecasts and found that when ocean-blowing trade winds dropped, the jellyfish arrived.

Researchers are confident that the modelling will apply across the jellyfish's range. 'You will probably need a bit of tweaking from place to place, but the general principle will hold true', explained Dr Gershwin. By anticipating the arrival of these hazardous blooms, coastal authorities will be able to put in place management interventions to prevent people from being injured.

But are the box jelly fish really a problem in Europe? Other studies suggest that the shipping industry has artificially distributed jellyfish into non-native habitats where they then colonise. Juvenile jellyfish (polyps) attach to ship hulls and travel with them. Ships also take on ballast water in originating harbours and then dump the water (along with jellyfish and other organisms) when they arrive in a new location. Billions of gallons of ballast water are transported annually around the globe.

Jellyfish are aggressive colonisers. One such example is the Comb Jelly, an American species which has invaded the Black and Caspian seas. The MEMO project (Mnemiopsis leidyi:Ecology, Modelling and Observation), is examining their biology and physiology in an attempt to monitor the impact the jellyfish are having on commercial fish and shellfish stocks. The project started in January 2011 and is funded by the Interreg IVa MEMO-2 Seas Programme. In total, EUR 3.5 million is allocated over three years, involving 20 scientists from the UK, France, Belgium and the Netherlands.

Changing temperatures of the seas and oceans and greater cross-transference of species due to shipping are having an impact. Whether it is a case of keeping swimmers safe, or trying to prevent invasive species of jellyfish from spreading into commercially sensitive waters, ongoing research is much needed.