Conceptual model of brain implant for PTSD and TBI 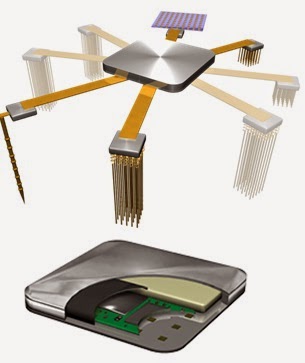 Courtesy of MGH and Draper Labs

The goal of the project, which is made possible by a $30 million grant from the Defense Advanced Research Projects Agency (DARPA), is to design and build a first-of-its-kind implantable deep brain stimulation (DBS) device which will monitor signals across multiple brain structures in real time. Based on the monitored activity, it will then deliver stimulation to key areas to alleviate symptoms related to neuropsychiatric disorders such as PTSD, severe depression, drug addiction, and TBI.

“Deep brain stimulation has been shown to be an effective treatment for a variety of brain diseases, especially those involving movement like Parkinson’s disease,” says Emad Eskandar MD, director of functional neurosurgery at MGH and the project’s principal investigator.

“Our goal is to take DBS to the next level and create an implantable device to treat disorders like PTSD and TBI. Together with our partners we’re committed to developing this technology, which we hope will be a bold new step toward treating those suffering from these debilitating disorders,” says Eskandar.

The MGH-based team will include the departments of Neurosurgery, Psychiatry, Neurology, Anesthesia and Critical Care, and the Martinos Center for Biomedical Imaging. The TRANSFORM DBS team will also work closely with scientists at Draper Laboratories, who will be responsible for the engineering portions of the project.

“We’re strongly encouraged by the previous data connected with this approach,” says Eskandar. “Our hope is that this project will not only restore quality of life for those affected, both military and civilian, but dramatically change the way we approach the treatment of neuropsychiatric disorders.”


Contacts and sources:
Mike Morrison
Massachusetts General Hospital
on May 27, 2014