The scientific imaging system OSIRIS on board ESA’s Rosetta spacecraft witnesses the awakening of the mission’s target comet.

Between March 27th and May 4th, Rosetta approached comet 67P/Churyumov-Gerasimenko from a distance of around 5 million to 2 million kilometers. This sequence of images shows the comet’s movement against the background star field during this time. Rosetta (and the comet) are between 640 and 610 million km from the Sun. The comet is seen to develop a dust coma as the sequence progresses, with clear activity already visible in late-April. Exposure times are 720s for each image, taken with the OSIRIS/NAC through the Orange filter.

“67P is beginning to look like a real comet”, comments Principal Investigator Holger Sierks from the MPS. The images recorded in late-April from a distance of approximately 2 million kilometers show not only a bright nucleus, but also paler structures surrounding it. When comets approach the Sun, volatile gases evaporate from their surface carrying fountains of tiny dust particles with them. In part, these gases and dust remain bound to the nucleus by gravity thus constituting the comet’s coma.


The comet 67P/Churyumov-Gerasimenko, target of ESA’s Rosetta mission, has begun to develop a dust coma. This can be seen in a series of images taken by OSIRIS, the spacecraft’s scientific imaging system, between March 27th and May 4th. In the images from the end of April, the dust that the comet is already emitting is clearly visible as an evolving coma and reaches approximately 1300 kilometers into space. Scientists from the OSIRIS team presented these new findings in a meeting at the Max Planck Institute for Solar System Research (MPS).

On April 30th, the comet’s coma extended over1300 km from the nucleus. For the close up view on the right, a long sequence of images (each with a 10 minute exposure) was taken and stacked. 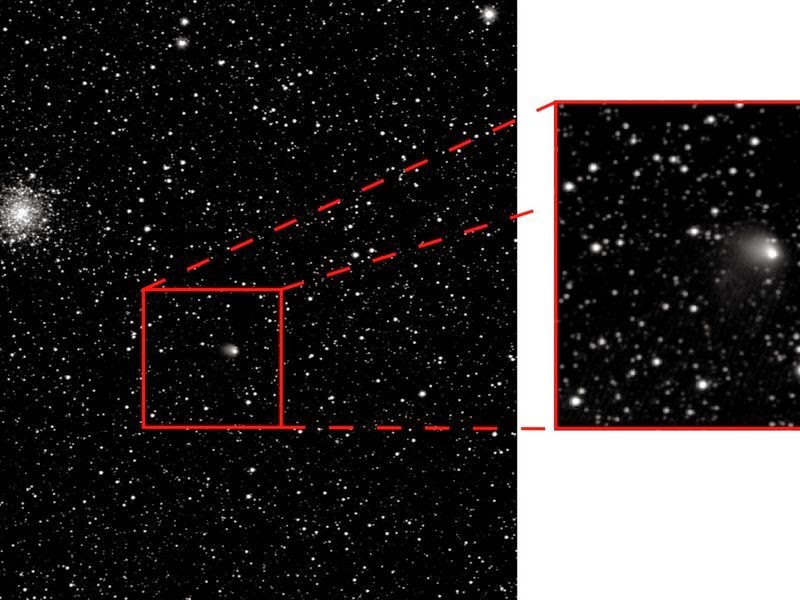 Still more than 600 million kilometers separate 67P from the Sun. This corresponds to more than four times the distance between Earth and Sun. This early onset of cometary activity offers scientists the opportunity to study dust production and structures within the coma at an early stage of the mission. “It’s hard to believe that only a few months from now, Rosetta will be deep inside this cloud of dust and en route to the origin of the comet’s activity”, says Holger Sierks.

From the changes in brightness that the comet displays periodically over the course of several hours, the OSIRIS team was now also able to determine its rotational period. With 12.4 hours the time for one full rotation is approximately 20 minutes shorter than previously thought.

Rosetta is an ESA mission with contributions from its member states and NASA. Rosetta's Philae lander is provided by a consortium led by DLR, MPS, CNES and ASI. Rosetta will be the first mission in history to rendezvous with a comet, escort it as it orbits the Sun, and deploy a lander to its surface.

Rosetta is an ESA mission with contributions from its member states and NASA. Rosetta's Philae lander is provided by a consortium led by DLR, MPS, CNES and ASI. Rosetta will be the first mission in history to rendezvous with a comet, escort it as it orbits the Sun, and deploy a lander to its surface.

The scientific imaging system OSIRIS was built by a consortium led by the Max Planck Institute for Solar System Research (Germany) in collaboration with CISAS, University of Padova (Italy), the Laboratoire d'Astrophysique de Marseille (France), the Instituto de Astrofísica de Andalucia, CSIC (Spain), the Scientific Support Office of the European Space Agency (The Netherlands), the Instituto Nacional de Técnica Aeroespacial (Spain), the Universidad Politéchnica de Madrid (Spain), the Department of Physics and Astronomy of Uppsala University (Sweden), and the Institute of Computer and Network Engineering of the TU Braunschweig (Germany). OSIRIS was financially supported by the national funding agencies of Germany (DLR), France (CNES), Italy (ASI), Spain (MEC), and Sweden (SNSB) and the ESA Technical Directorate.

Max Planck Institute for Solar System Research, Göttingen
on May 19, 2014