Ozone pollution across the continental United States will become far more difficult to keep in check as temperatures rise, according to new research. The detailed study shows that Americans face the risk of a 70 percent increase in unhealthy summertime ozone levels by 2050.

This is because warmer temperatures and other changes in the atmosphere related to a changing climate, including higher atmospheric levels of methane, spur chemical reactions that lead to ozone.

Unless emissions of specific pollutants that are associated with the formation of ozone are sharply cut, almost all of the continental United States will experience at least a few days with unhealthy air during the summers, the research shows. Heavily polluted locations in parts of the East, Midwest, and West Coast in which ozone already frequently exceeds recommended levels could face unhealthy air during most of the summer.

“It doesn’t matter where you are in the United States—climate change has the potential to make your air worse,” said scientist Gabriele Pfister of the National Center for Atmospheric Research (NCAR) in Boulder, Colo., who is lead author of the new study. “A warming planet doesn’t just mean rising temperatures, it also means risking more summertime pollution and the health impacts that come with it.”

Visible pollutants can react with sunlight to create invisible ozone pollution, which frequently reaches unhealthy levels in major cities like Los Angeles. New research indicates that the pollution may worsen in coming decades due to chemical reactions in the air associated with climate change. 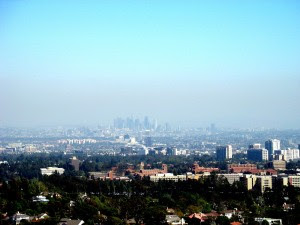 However, the research also showed that a sharp reduction in the emissions of certain pollutants would lead to dramatically decreased levels of ozone even as temperatures warm.

The detailed research is one of the first of its type to be conducted with new, highly advanced geoscience supercomputing capabilities. It will be published online this week in the Journal of Geophysical Research-Atmospheres, a journal of the American Geophysical Union.

Ozone pollution is not emitted directly, but instead forms as a result of chemical reactions that take place between nitrogen oxides and volatile organic compounds in the presence of sunlight. These gases come from human activities such as combustion of coal and oil as well as natural sources such as emissions from plants.

Unlike ozone in the stratosphere, which benefits life on Earth by blocking ultraviolet radiation from the Sun, ground-level ozone can trigger a number of health problems. These range from coughing and throat irritation to more serious problems, including aggravation of asthma, bronchitis, and emphysema. Even short periods of unhealthy ozone levels can cause local death rates to rise. Ozone pollution also damages crops and other plants.

To examine the impacts of climate change on ozone pollution, Pfister and her colleagues looked at two scenarios. In one, emissions of nitrogen oxides and volatile organic compounds from human activities would continue at current levels through 2050. In the other, emissions would be cut by 60-70 percent. Both scenarios assumed continued greenhouse gas emissions with significant warming.

The researchers found that, if emissions continue at present-day rates, the number of eight-hour periods in which ozone would exceed 75 parts per billion (ppb) would jump by 70 percent on average across the United States by 2050. The 75 ppb level over eight hours is the threshold that is considered unhealthy by the Environmental Protection Agency. (The agency is considering tightening the standard to a value between 65 and 70 ppb over eight hours.)

Overall, the study found that, 90 percent of the time, ozone levels would range from 30 to 87 parts per billion (ppb) in 2050 compared with an estimated 31 to 79 ppb in the present. Although the range itself shifts only slightly, the result is a much larger number of days above the threshold now considered unhealthy.

There are three primary reasons for the increase in ozone with climate change:
Chemical reactions in the atmosphere that produce ozone occur more rapidly at higher temperatures.
Plants emit more volatile organic compounds at higher temperatures, which can increase ozone formation if mixed with pollutants from human sources.
Methane, which is increasing in the atmosphere, contributes to increased ozone globally and will enhance baseline levels of surface ozone across the United States.

In the second scenario, Pfister and her colleagues found that sharp reductions in nitrogen oxides and volatile organic compounds could reduce ozone pollution even as the climate warms. In fact, 90 percent of the time, ozone levels would range from 27 to 55 ppb. The number of instances when ozone pollution would exceed the 75 ppb level dropped to less than 1 percent of current cases.

“Our work confirms that reducing emissions of ozone precursors would have an enormous effect on the air we all breathe,” Pfister said.

Pfister and a nationwide scientific team expect to learn more about the sources, chemistry and movement of air pollutants this summer when they launch a major field experiment Front Range Air Pollution and Photochemistry Éxperiment (FRAPPÉ) along Colorado’s Front Range.

The role of supercomputing

The new study was among the first conducted on a new supercomputer at NCAR known as Yellowstone, which is capable of very high performance, that has been measured at 1.5 petaflops (1.5 thousand trillion floating point operations per second). The IBM system, supported by funding from the NSF and the University of Wyoming, is one of the world’s most powerful computers specifically dedicated to research in the atmospheric and related sciences.

Scientists used it to simulate pollution levels hour by hour for 39 hypothetical summers. This allowed the team to account for year-to-year variations in meteorological conditions, such as hot and dry vs. cool and wet, thereby getting a more detailed and statistically significant picture of future pollution levels.

To simulate the interplay of global climate with regional pollution conditions, the scientists turned to two of the world’s leading atmospheric models, both based at NCAR and developed through broad collaborations with the atmospheric science community. They used the Community Earth System Model, funded primarily by the Department of Energy and NSF, to simulate global climate as well as atmospheric chemistry conditions. They also used an air chemistry version of the multiagency Weather Research and Forecasting model to obtain a more detailed picture of regional ozone levels.

Even with Yellowstone’s advanced computing speed, it took months to complete the complex simulations.

“This research would not have been possible even just a couple of years ago,” said Pfister. “Without the new computing power made possible by Yellowstone, you cannot depict the necessary detail of future changes in air chemistry over small areas, including the urban centers where most Americans live.”

The work was funded by the National Science Foundation (NSF), which is NCAR’s sponsor, and the U.S. Department of Energy. In addition to NCAR, the study co-authors are from the Pacific Northwest National Laboratory; University of Colorado, Boulder; and North-West University in South Africa.

Contacts and sources:
American Geophysical Union
on May 05, 2014