The last paper of the late Professor Seung-Man Yang, who was a past master of colloids and fluid mechanics

The mineral opal does not possess any pigments, but it appears colorful to our eyes. This is because only a particular wavelength is reflected due to the regular nano-structure of its surface. The material that causes selective reflection of the light is called photonic crystals. 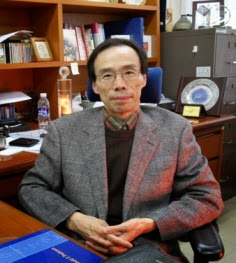 The deceased Professor Seung-Man Yang and his research team from KAIST’s Chemical and Biomolecular Engineering Department ha ve developed micro-pattern technology using photolithographic process. This can accelerate the commercialization of photonic crystals, which is hailed as the next generation optics material.

The research results were published in the April 16th edition of Advanced Materials, known as the most prestigious world-renowned journal in the field of materials science.

The newly developed photonic crystal micro-pattern could be used as a core material for the next generation reflective display that is clearly visible even under sunlight. Since it does not require a separate light source, a single charge is enough to last for several days.

Until now, many scientists have endeavored to make photonic crystals artificially, however, most were produced in a lump and therefore lacked efficiency. Also, the low mechanical stability of the formed structure prevented from commercialization.

In order to solve these problems, the research team has copied the nano-structure of opals.

Glass beads were arranged in the same nano-structure as the opal on top of the photoresist material undergoing photocuring by ultraviolet light. The glass beads were installed in the photoresist materials, and UV light was selectively exposed on micro regions. The remaining region was developed by photolithographic process to successfully produce photonic crystals in micro-patterns.

Opal structure [left] and inverted structure of the opal [right]

The co-author of the research, KAIST Chemical and Biomolecular Engineering Department’s Professor Sin-Hyeon Kim, said, “Combining the semiconductor process technology with photonic crystal pattern technology can secure the practical applications for photonic crystals.”He also predicted “This technology can be used as the key optical material that configures the next generation reflective color display device with very low power consumption.”

The late Professor Seung-Man Yang was a world-renowned expert in the field of colloids and fluid mechanics. Professor Yang published over 193 papers in international journals and continued his research until his passing in last September.

He received Du Pont Science and Technology Award in 2007, KAIST Person of the Year 2008, Gyeong-Am Academy Award in 2009, as well as the President’s Award of the Republic of Korea in March 2014. The researchers devoted the achievement of this year’s research to Professor Yang in his honor.

Research was conducted by KAIST Photonic-fluidic Integrated Devices Research Team, as a part of the Creative Research Program funded by the Ministry of Science, ICT and Future Planning, Republic of Korea.

Contacts and sources:
KAIST Chemical and Biomolecular Engineering Department
on May 17, 2014