Birth Of A Star In Double-Quick Time

Scientists have observed the nurseries of massive stars in our galaxy

Astronomers have undertaken a new survey of the plane of our Milky Way and discovered a large quantity of cold, dense clumps of gas and dust, apparently the cradles of massive stars. A team headed by Timea Csengeri from the Max Planck Institute for Radio Astronomy in Bonn has now used the map, which was obtained by the APEX telescope at a wavelength of 0.87 millimetres, to estimate the time scale for the formation of stars. The result: the process seems to proceed very rapidly, with massive stars taking only 75,000 years to form on average, a significantly shorter time than less massive stars.

Map of the galactic landscape: ATLASGAL covers approximately two thirds of the whole region of the Milky Way within 50,000 light years of the galactic centre. The image shows the area covered by ATLASGAL in the region between the two huge molecular cloud complexes W33 and M17 in the Sagittarius constellation. The two enlarged sections show radiation in the medium infrared range of the GLIMPSE survey with the Spitzer telescope in blue and green, and radiation in the submillimeter range from ATLASGAL in red, with contour lines added. The left detail shows a cold, massive clump in which no star has yet formed, the right detail shows a young massive star. At the bottom right is a schematic image of the galaxy with the “Solar Circle” (green circle) and the whole region covered by ATLASGAL within the Milky Way (shaded area). 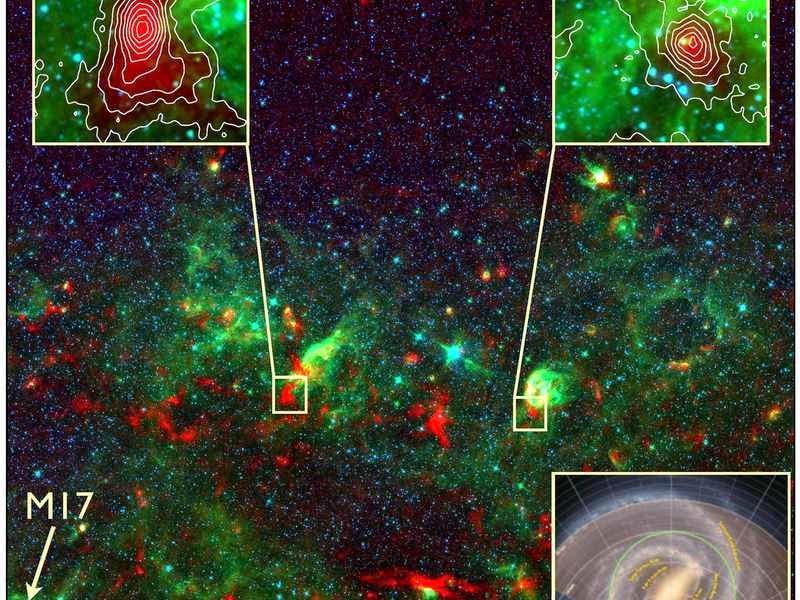 Stars with a much larger mass than our Sun finish their fast and furious lives with huge supernova explosions, thereby producing the heavy elements in the universe. Before they do this they emit powerful stellar winds and high-energy radiation. Consequently, the stars not only impact on their local environment, but also on the appearance and future evolution of the galaxy as a whole.

These stars form in the coldest regions of the Milky Way – deep inside clouds of dust which are so dense that they almost completely swallow up the radiation of the young stars hidden inside. It is here that a new generation of massive stars forms, embedded in the dense gas and dust clouds. Observations at wavelengths longer than those in the visible or infrared range are necessary if researchers want to follow the earliest stages of the birth.

This is where the 12-metre APEX telescope, which operates in the submillimeter range, comes into play. A team of astronomers has used the telescope in conjunction with the LABOCA camera built at the Max Planck Institute for Radio Astronomy to track down the cradles of the most massive stars. APEX stands on the Chajnantor Plain in the Chilean Atacama Desert at an altitude of 5,100 metres, one of the few locations on Earth which allows observations at submillimetre wavelengths at all.

ATLASGAL (APEX Telescope Large Area Survey of the Galaxy) covers a region of more than 420 square degrees in the galactic plane and thus 97 percent of the inner Milky Way within the so-called Solar Circle. This contains large regions of all four spiral arms and around two thirds of the complete molecular portion of the galaxy. The data cover most of the nurseries of massive stars. And it is also to help the researchers to produce a three-dimensional map.
The sky over APEX: The image shows the southern region of the Milky Way with the stars Alpha and Beta Centauri, the Crux, and the region around Eta Carinae (bright reddish nebula above left of the image centre). The ATLASGAL survey with the APEX telescope covers the galactic plane up to the Carina region. 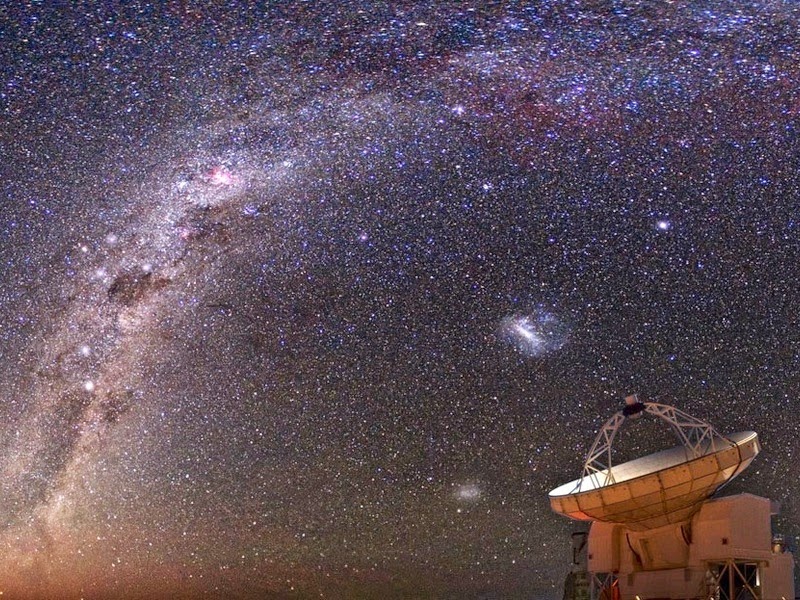 “Our team has used the ATLASGAL data to generate the most comprehensive sample of the previously hidden birthplaces of massive stars,” says Timea Csengeri from the Max Planck Institute for Radio Astronomy, the lead author of the study. “We found a large number of new potential locations where these stars are currently forming in our Milky Way.”

This comprehensive statistical record has enabled the researchers to show that the processes which give rise to the cold, dense clouds in which the most massive stars are born must proceed extremely rapidly – on a time scale of only 75,000 years. This is significantly shorter than the corresponding time scales for the formation of lower mass stars such as our Sun.

“Researchers already knew about the fast and furious life of the most massive stars in our Milky Way. But now we have been able to show that it is also accompanied by a correspondingly short formation period in their birth cocoons,” says Max Planck astronomer James Urquhart. In fact, less massive, Sun-like stars live around 1,000 times longer than massive ones. And the new results show that the massive stars also form on a very short time scale in a star formation process which is much more dynamic.

According to Friedrich Wyrowski, ATLASGAL also provides charts with data for the most extreme dust clouds: “The star formation processes taking place inside these dust clouds can then be investigated with the aid of the new ALMA telescope network at much higher angular resolution,” is what the APEX project scientist at the Max Planck Institute for Radio Astronomy has to say about future projects.