Air Pollution Called One Of The Largest Risks To Health Worldwide

Air quality in most cities worldwide fails to meet World Health Organisation (WHO) guidelines for safe levels. And the problem of air pollution is only increasing. In fact, according to WHO, indoor and outdoor air pollution combined are among the largest risks to health worldwide.

According to information released by WHO this week, only 12% of the 1 600 cities in its Urban Air Quality database comply with Air Quality Guideline levels. And about half of the urban population being monitored is exposed to air pollution that is at least 2.5 times higher than the levels WHO recommends. 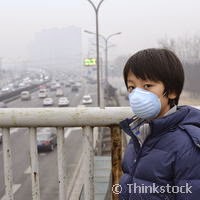 Additionally, a WHO report released earlier this year estimates that outdoor air pollution was responsible for the deaths of 3.7 million people under the age of 60 in 2012.

Meanwhile, across the pond in the USA, air pollution is big in the news this week. New Scientist reports on the Supreme Court ruling that the US Environmental Protection Agency (EPA) can regulate air pollution that drifts across state lines, meaning about 1000 power plants will be forced to reduce their emissions.

The decision won't please states like Texas and Ohio, where coal-fired power plants are still big business. According to New Scientist, the EPA tried to impose the regulations in 2011, but energy firms and polluting states sued to block the move.

Regarding efforts to tackle air pollution worldwide, Dr Maria Neira of WHO is keen to emphasise that the battle is not lost. 'We can win the fight against air pollution and reduce the number of people suffering from respiratory and heart disease, as well as lung cancer.'

'Effective policies and strategies are well understood, but they need to be implemented at sufficient scale. Cities such as Copenhagen and Bogotà, for example, have improved air quality by promoting 'active transport' and prioritizing dedicated networks of urban public transport, walking and cycling.'

WHO tells us that other measures include ensuring that houses are energy efficient, that urban development is compact and well served by public transport routes, that street design is appealing and safe for pedestrians and cyclists, and waste is well managed.

There are many components of air pollution, both gaseous and solid. But high concentrations of small and fine particulate pollution is particularly associated with high numbers of deaths from heart disease and stroke, as well as respiratory illnesses and cancers. Measurement of fine particulate matter of 2.5 micrometers or less in diameter (PM2.5) is considered to be the best indicator of the level of health risks from air pollution.