Giant sperm from a 17 million year old fossilised shrimp has been imaged at the European Synchrotron, the ESRF. An international team of scientists has revealed that the fossilised sperm – the oldest known specimen of its kind - is bigger than the creature it came from.

Furthermore the advanced X-ray techniques at the ESRF have shown that the shrimp’s reproduction process is the same now as it was millions of years ago. The results appear in the journal Proceedings of the Royal Society B. (14 May 2014).

The site at Riversleigh, Australia with palaeontologists working at points within what was the original cave floor. The red line indicates the approximate area of the cave floor.

The fossilised sperm came from a tiny freshwater shrimp, or crustacean, known as an ostracod. It was found at the Riversleigh World Heritage Fossil Site in Australia. The remote area in Queensland is well known as a rich source of fossils but this has surprised even very experienced excavators of the site:

“The discovery of fossil sperm, complete with sperm nuclei, was totally unexpected. It now makes us wonder what other types of extraordinary preservation await discovery in these deposits”, said Professor Mike Archer, from the University of New South Wales (UNSW).

The fossils were originally collected by UNSW in 1988 and analysed at La Trobe University where ostracod researchers discovered that the fossils contained fossilised soft tissues. These were then examined by both the Ludwig Maximilian University of Munich in Germany, and by Dr Paul Tafforeau at the ESRF.

“Using these methods, we can reconstruct the morphology of the fossil giant sperm cells in three dimensions,” said lead author of the study Dr. Renate Matzke-Karasz from the Ludwig Maximilian University of Munich.

Peter Cloetens from the ESRF who is also named on the paper, added:

"The fossils being exceptionally well preserved, the reproductive organs of the ostracods could be studied in great detail by nanotomography at the ESRF. For the first time we could go down to the level of the cell nucleus. We combined the exceptional phase contrast possibilities of two instruments at the ESRF, visualising first the complete fossil on one instrument and then zooming with record resolution into the reproductive organs".

Using nanotomography techniques at the ESRF the nucleus of each sperm cell can be seen. In this cross section the nuclei are seen as black dots inside each of the circles.
Credit: Renate Matzke-Karasz.

3-D reconstructions also show that shape and size and reproductive physiology in these organisms have remained virtually unchanged for millions of years. “This suggests that their mode of reproduction represents a functionally successful model,” says Matzke-Karasz.

The exceptional preservation of the sperm is believed to be due to bat droppings in the cave in which they were found.

“About 17 million years ago, Bitesantennary Site was a cave in the middle of a vast biologically diverse rainforest. Tiny ostracods thrived in a pool of water in the cave that was continually enriched by the droppings of thousands of bats,” says Professor Archer.

UNSW’s Associate Professor Suzanne Hand, who is a specialist in extinct bats and their ecological role in Riversleigh’s ancient environments, says the bats could have played a role in the extraordinary preservation of the ostracod sperm cells. The steady rain of droppings from thousands of bats in the cave would have led to high levels of phosphorous in the water, which could have aided mineralisation of the soft tissues.

Artists impression of the Bitesantennary site at Riversleigh in Australia as it might have looked 17 million years ago. 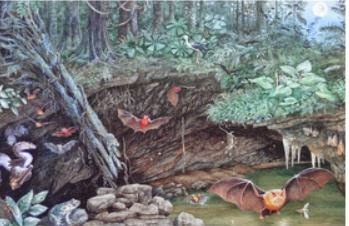 The paper in the journal Proceedings of the Royal Society B can be found here.
on May 23, 2014