150 Million Year Old Archaeopteryx: To Fly Or Not To Fly

Archaeopteryx fossils, that are among the rarest in the world because only twelve are known to exist, have been examined at the European Synchrotron, the ESRF. Scientists are trying to answer the question that has been left unanswered ever since the species was discovered in the 19th century – did archaeopteryx fly? 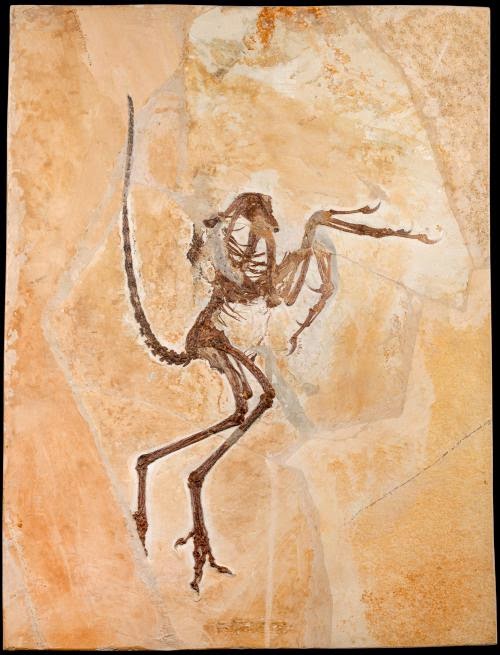 Archaeopteryx lived 150 million years ago in what is now Southern Germany. They had the teeth and claws associated with dinosaurs but the feathered wings of birds. This combination has puzzled scientists; the wings imply they could fly but their reconstructed body weight and certain features of the skeleton have been suggested to contradict this theory. The species is seen as critical for reconstructing the evolution of birds.

Uncovering more details about archaeopteryx, has proved very challenging. The body of material available on these creatures is very limited due to the small number of skeletons that have been found so far. Furthermore, the fragility of the material that does exist means that destructive research techniques, such as studies to the fabric of the bone itself, are not possible. All the information to date has been gathered by studying the surface of fossil bones that are still embedded in limestone plates.

Unfortunately, even the most powerful non-destructive imaging techniques (such as X-ray tomography) cannot be applied to archaeopteryx because the rock slabs they are embedded in often exceed 50 centimetres in size – too large for conventional methods that require a sample to be rotated.

A new X-ray scattering technique at the ESRF has allowed the archaeopteryx to be imaged in a completely new way. Based on the pinhole camera, a very old optical principle described by the Arabian scientist Ibn al-Haytham in the 10th century, an X-ray beam the size of a human hair was shone on the subject and allowed for a complete three-dimensional observation of the specimens.


The team with the Wellnhoferia grandis archaeopteryx. 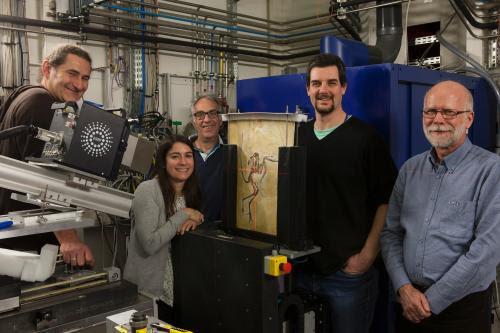 The technique was used on two key fossils - the Wellnhoferia grandis which is an almost complete skeleton of the largest archaeopteryx specimen known to date, and an isolated archaeopteryx wing that has been preserved in an unusual 3D state with the individual bones still intact.

The studies have allowed the scientists to see previously obscured features of the archaeopteryx and see the species in a new light. It is anticipated that the results will reveal new information about the archaeopteryx as well as provide better insight into bird evolution in general.

The research also aids the development of new scanning techniques for imaging small features in large flat fossils. These experiments were carried out on beamlines BM5 and ID19.

The project involves Paul Tafforeau at the ESRF, Martin Röper from Germany’s Bürgermeister-Müller-Museum - also known as the Solnhofen Museum - where the specimens are kept, Anne Bonnin from the Paul Scherrer Institut in Switzerland and Dennis Voeten and Vincent Beyrand from Palacký University in the Czech Republic.

The archaeopteryx specimens are currently being featured at the renewed exhibition at Solnhofen museum in Germany. The exhibition takes visitors on a journey across different habitats of the area around 150 million years ago. For more details see the following website: http://www.solnhofen.de/index.php?id=0,49.