A 13th Century Bishop’s theory about the evolution of the Universe has been shown to have parallels with modern ideas of multiple universes, according to research from Durham University.

The Ordered Universe Project, which brings together physicists, psychologists, cosmologists, Latin experts and medieval historians, has been studying the texts of Robert Grosseteste, one-time Bishop of Lincoln. 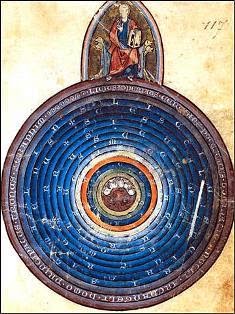 The Durham-led team created a fresh Latin translation, aided by other experts with knowledge of the medieval mindset and its context, before applying modern mathematical and computational techniques to Grosseteste’s equations.

Their latest research paper, published today in the Royal Society Journal, Proceedings of the Royal Society A, is entitled “A medieval multiverse?: Mathematical modelling of the thirteenth century universe of Robert Grosseteste”.

Grosseteste’s treatise De Luce (meaning “Concerning Light”), written in 1225, describes a Universe created via a Big Bang-like explosion of light before forming into a series of nine celestial spheres.

“It proposes that the same physics of light and matter, which explain the solidity of ordinary objects, could be applied to the cosmos as a whole. In doing so it also suggests, although this was probably not apparent to Grosseteste at the time, a series of ordered universes reminiscent of the modern “multiverse” concept.

“Grosseteste’s calculations are very consistent and precise. Had he had access to modern calculus and computing methods, he surely would have used them, so that is what the team has done.”

Computer models were used to express Grosseteste’s equations and they created a series of celestial spheres as Grosseteste envisaged. Other models maintaining the same physical laws created universes with an infinite number of spheres.

“By applying modern computational power to Grosseteste’s incredibly consistent work, it appears we had come across a ‘medieval multiverse’ implicit within it.

“We now know of course, thanks to the astronomical advances of the last four centuries, that a cosmos consisting of nine spheres centred on the Earth is not correct. But when Grosseteste wrote De Luce, it was the most elegant and simple theory consistent with then-current knowledge. It shows us that the fundamental human desire to understand the workings of nature is very old.

“It’s fantastic that this has coincided with results from the BICEP 2 project which has uncovered new evidence from the Cosmic Microwave Background to support a Big Bang theory for the origin of the Universe.”

Contacts and sources:
Durham University
on May 05, 2014