Researchers have produced a stable porous membrane that is thinner than a nanometer. This is a 100,000 times thinner than the diameter of a human hair. The membrane consists of two layers of the much exalted ”super material” graphene, a two-dimensional film made of carbon atoms, on which the team of researchers, led by Professor Hyung Gyu Park at the Department of Mechanical and Process Engineering at ETH Zurich, etched tiny pores of a precisely defined size. 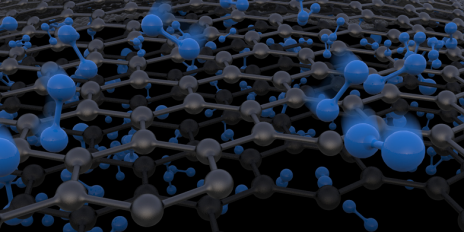 The membrane can thus permeate tiny molecules. Larger molecules or particles, on the other hand, can pass only slowly or not at all. “With a thickness of just two carbon atoms, this is the thinnest porous membrane that is technologically possible to make,” says PhD student Jakob Buchheim, one of the two lead authors of the study, which was conducted by ETH-Zurich researchers in collaboration with scientists from Empa and a research laboratory of LG Electronics. The study has just been published in journal Science.

The ultra-thin graphene membrane may one day be used for a range of different purposes, including waterproof clothing. “Our membrane is not only very light and flexible, but it is also a thousand fold more breathable than Goretex,” says Kemal Celebi, a postdoc in Park’s laboratory and also one of the lead authors of the study. The membrane could also potentially be used to separate gaseous mixtures into their constituent parts or to filter impurities from fluids.

The researchers were able to demonstrate for the first time that graphene membranes could be suitable for water filtration. The researchers also see a potential use for the membrane in devices used for the accurate measurement of gas and fluid flow rates that are crucial to unveiling the physics around mass transfer at nanoscales and separation of chemical mixtures.

The researchers not only succeeded in producing the starting material, a double-layer graphene film with a high level of purity, but they also mastered a technique called focused ion beam milling to etch pores into the graphene film. In this process, which is also used in the production of semiconductors, a beam of helium or gallium ions is controlled with a high level of precision in order to etch away material.

The researchers were able to etch pores of a specified number and size into the graphene with unprecedented precision. This process, which could easily take days to complete, took only a few hours in the current work. “This is a breakthrough that enables the nanofabrication of the porous graphene membranes,” explains Ivan Shorubalko, a scientist at Empa that also contributed to the study.

In order to achieve this level of precision, the researchers had to work with double-layer graphene. “It wouldn’t have been possible for this method to create such a membrane with only one layer because graphene in practice isn't perfect,” says Park. The material can exhibit certain irregularities in the honeycomb structure of the carbon atoms. Now and again, individual atoms are missing from the structure, which not only impairs the stability of the material but also makes it impossible to etch a high-precision pore onto such a defect. The researchers solved this problem by laying two graphene layers on top of each other. The probability of two defects settling directly above one another is extremely low, explains Park.

A key advantage of the tiny dimensions is that the thinner a membrane, the lower its permeation resistance. The lower the resistance, the higher the energy-efficiency of the filtration process. “With such atomically thin membranes we can reach maximal permeation for a membrane of a given pore size and we believe that they allow the fastest feasible rate of permeation,” says Celebi.

However, before these applications are ready for use on an industrial scale or for the production of functional waterproof clothing, the manufacturing process needs to be further developed. To investigate the fundamental science, the researchers worked with tiny pieces of membrane with a surface area of less than one hundredth of a square millimeter. Objectives from now on will be to produce larger membrane surfaces and impose various filtering mechanisms.