Why Are Night Shining Clouds Increasing?

First spotted in 1885, silvery blue clouds sometimes hover in the night sky near the poles, appearing to give off their own glowing light. Known as noctilucent clouds, this phenomenon began to be sighted at lower and lower latitudes -- between the 40th and 50th parallel -- during the 20th century, causing scientists to wonder if the region these clouds inhabit had indeed changed -- information that would tie in with understanding the weather and climate of all Earth. 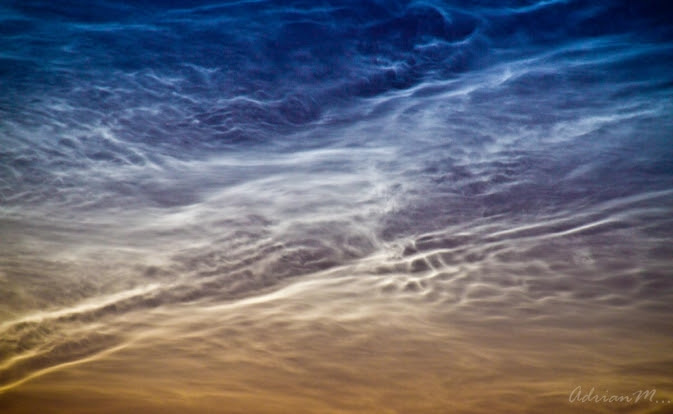 A NASA mission called Aeronomy of Ice in the Mesosphere, or AIM, was launched in 2007 to observe noctilucent clouds, but it currently only has a view of the clouds near the poles. Now scientists have gathered information from several other missions, past and present, and combined it with computer simulations to systematically show that the presence of these bright shining clouds have indeed increased in areas between 40 and 50 degrees north latitude, a region which covers the northern third of the United Sates and the lowest parts of Canada. The research was published online in the Journal of Geophysical Research: Atmospheres on March 18, 2014.

NASA's Aeronomy of Ice in the Mesosphere, or AIM, mission captured this image of noctilucent clouds over the poles in 2010. By compiling data from several missions at once, researchers have now created a record of the clouds at lower latitudes as well. 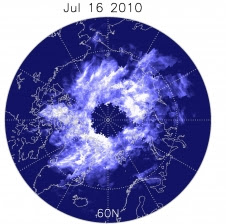 "Noctilucent clouds occur at altitudes of 50 miles above the surface -- so high that they can reflect light from the sun back down to Earth," said James Russell, an atmospheric and planetary scientist at Hampton University in Hampton, Va., and first author on the paper. "AIM and other research has shown that in order for the clouds to form, three things are needed: very cold temperatures, water vapor and meteoric dust. The meteoric dust provides sites that the water vapor can cling to until the cold temperatures cause water ice to form."

To study long-term changes in noctilucent clouds, Russell and his colleagues used historical temperature and water vapor records and a validated model to translate this data into information on the presence of the clouds. They used temperature data from 2002 to 2011 from NASA's Thermosphere Ionosphere Mesosphere Energetics and Dynamics, or TIMED, mission and water vapor data from NASA's Aura mission from 2005 to 2011. They used a model previously developed by Mark Hervig, a co-author on the paper at GATS, Inc., in Driggs, Idaho.

The team tested the model by comparing its output to observations from the Osiris instrument on the Swedish Odin satellite, which launched in 2001, and the SHIMMER instrument on the U.S. Department of Defense STPSat-1 mission, both of which observed low level noctilucent clouds over various time periods during their flights. The output correlated extremely well to the actual observations, giving the team confidence in their model.

The model showed that the occurrence of noctilucent clouds had indeed increased from 2002 to 2011. These changes correlate to a decrease in temperature at the peak height where noctilucent clouds exist in the atmosphere. Temperatures at this height do not match temperatures at lower levels – indeed, the coldest place in the atmosphere is at this height during summertime over the poles – but a change there certainly does raise questions about change in the overall climate system.

Russell and his team will research further to determine if the noctilucent cloud frequency increase and accompanying temperature decrease over the 10 years could be due to a reduction in the sun’s energy and heat, which naturally occurred as the solar output went from solar maximum in 2002 to solar minimum in 2009.

"As the sun goes to solar minimum, the solar heating of the atmosphere decreases, and a cooling trend would be expected," said Russell.