A fluctuating tilt in a planet’s orbit does not preclude the possibility of life, according to new research by astronomers at the University of Washington, Utah’s Weber State University and NASA. In fact, sometimes it helps.

That’s because such “tilt-a-worlds,” as astronomers sometimes call them — turned from their orbital plane by the influence of companion planets — are less likely than fixed-spin planets to freeze over, as heat from their host star is more evenly distributed.

Tilted orbits such as those shown might make some planets wobble like a top that’s almost done spinning, an effect that could maintain liquid water on the surface, thus giving life a chance. 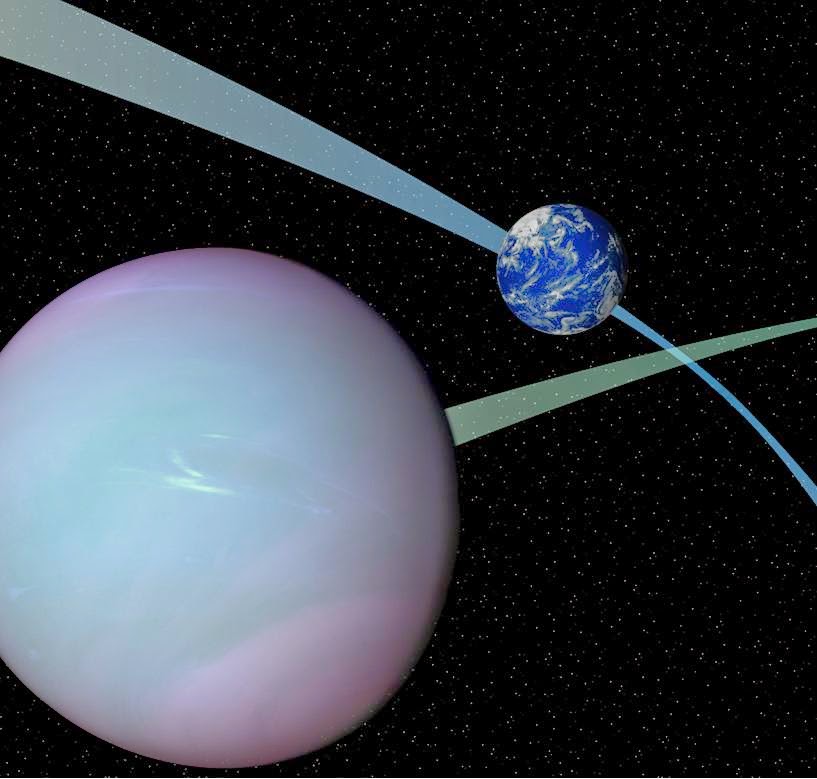 This happens only at the outer edge of a star’s habitable zone, the swath of space around it where rocky worlds could maintain liquid water at their surface, a necessary condition for life. Further out, a “snowball state” of global ice becomes inevitable, and life impossible.

The findings, which are published online and will appear in the April issue of Astrobiology, have the effect of expanding that perceived habitable zone by 10 to 20 percent.

And that in turn dramatically increases the number of worlds considered potentially right for life.

Such a tilt-a-world becomes potentially habitable because its spin would cause poles to occasionally point toward the host star, causing ice caps to quickly melt.

“Without this sort of ‘home base’ for ice, global glaciation is more difficult,” said UW astronomer Rory Barnes. “So the rapid tilting of an exoplanet actually increases the likelihood that there might be liquid water on a planet’s surface.”

Barnes is second author on the paper. First author is John Armstrong of Weber State, who earned his doctorate at the UW.

Earth and its neighbor planets occupy roughly the same plane in space. But there is evidence, Barnes said, of systems whose planets ride along at angles to each other. As such, “they can tug on each other from above or below, changing their poles’ direction compared to the host star.”

The team used computer simulations to reproduce such off-kilter planetary alignments, wondering, he said, “what an Earthlike planet might do if it had similar neighbors.”

Their findings also argue against the long-held view among astronomers and astrobiologists that a planet needs the stabilizing influence of a large moon — as Earth has — to have a chance at hosting life.

“We’re finding that planets don’t have to have a stable tilt to be habitable,” Barnes said. Minus the moon, he said, Earth’s tilt, now at a fairly stable 23.5 degrees, might increase by 10 degrees or so. Climates might fluctuate, but life would still be possible.

“This study suggests the presence of a large moon might inhibit life, at least at the edge of the habitable zone.”

The work was done through the UW’s Virtual Planetary Laboratory, an interdisciplinary research group that studies how to determine if exoplanets — those outside the solar system — might have the potential for life.

“The research involved orbital dynamics, planetary dynamics and climate studies. It’s bigger than any of those disciplines on their own,” Barnes said.

Armstrong said that expanding the habitable zone might almost double the number of potentially habitable planets in the galaxy.

Applying the research and its expanded habitable zone to our own celestial neighborhood for context, he said, “It would give the ability to put Earth, say, past the orbit of Mars and still be habitable at least some of the time — and that’s a lot of real estate.”

Barnes’ UW co-authors are Victoria Meadows, Thomas Quinn and Jonathan Breiner. Shawn Domagal-Goldman of NASA’s Goddard Space Flight Center is also a co-author. The research was funded by a grant from the NASA Astrobiology Institute.

Contacts and sources:
Peter Kelley
University of Washington
on April 15, 2014