In the framework of the EU-project Solarjet, scientists demonstrate for the first time the entire production path to liquid hydrocarbon fuels from water, CO2 and solar energy. The key technological component is a solar reactor developed at ETH Zurich.

A European consortium with the participation of ETH Zurich has experimentally demonstrated the first ever production of jet fuel via a thermochemical process using concentrated solar energy. Researchers from ETH Zurich conducted the EU funded project Solarjet together with the German Aerospace Center (DLR), the fuel company Shell, the think-tank Bauhaus Luftfahrt, and the consulting firm Arttic.

The key component of the production process of sustainable “solar kerosene” is a high-temperature solar reactor developed by the group of Aldo Steinfeld, Professor of Renewable Energy Carriers at ETH Zurich and Head of the Solar Technology Laboratory at the Paul Scherrer Institute. The reactor contains a porous ceramic solar absorber made of the metal oxide ceria, which enables the molecular splitting of water and CO2 in a cyclic two-step reduction-oxidation (redox) process.
Syngas for kerosene synthesis

The first, energy-intensive step proceeds at 1500 degrees Celsius using concentrated solar radiation as the energy source. The metal oxide releases oxygen, assuming a reduced state. In the second step at 700 degrees Celsius, the reduced metal oxide reacts with water and CO2, thus re-acquiring oxygen. As the metal oxide is thereby returned to its original state, it can enter the next cycle of the redox process. The net chemical product is synthesis gas – or syngas – a gas mixture of hydrogen (H2) and carbon monoxide (CO), which serves as the precursor for the synthesis of liquid hydrocarbon fuels.

“We were able to successfully perform 240 consecutive cycles,” says Daniel Marxer, PhD student of Steinfeld’s group. The yield was 750 litres of syngas, which were shipped in a pressurized vessel from Zurich to Amsterdam. There, at a Shell research centre, the solar syngas was finally converted into kerosene by an established method (Fischer-Tropsch process).
Exploring the industrial application

Artist's rendering of the functional principle 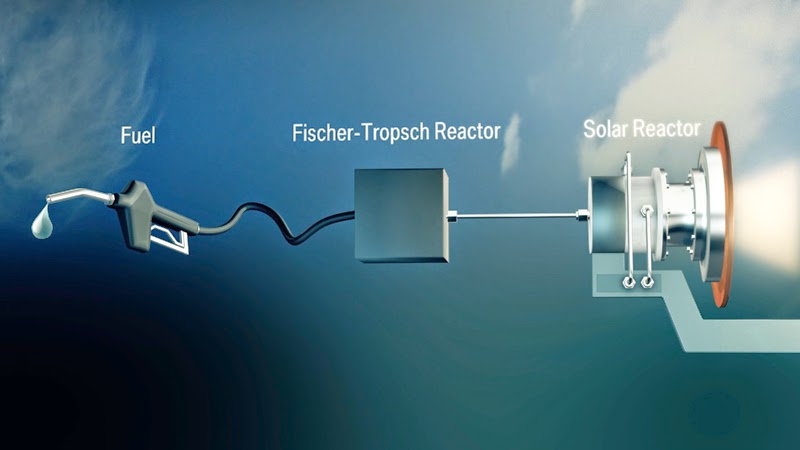 In a next phase the scientists aim to optimize the solar reactor technology. “Enhanced heat transfer and fast reaction kinetics are crucial for maximizing the solar-to-fuel energy conversion efficiency,” says Steinfeld. The industrial application in megawatt solar tower systems, such as those already applied commercially for electricity generation, is being explored.

It might also be possible in the future to obtain the required feedstock of CO2 from flue gas separation or directly from atmospheric air, thereby closing the material cycle for a CO2-neutral process. The scientists are well aware of the large areas required for fueling commercial aviation with solar kerosene. “The long term goal is to reach a 15 per cent efficiency with the solar-driven cyclic process“, says Steinfeld. 20,000 liters kerosene per day could then be produced in a solar tower system of one square kilometer.