The smallest, most abundant marine microbe, Prochlorococcus, is a photosynthetic bacteria species essential to the marine ecosystem. An estimated billion billion billion of the single-cell creatures live in the oceans, forming the base of the marine food chain and occupying a range of ecological niches based on temperature, light and chemical preferences, and interactions with other species. But the full extent and characteristics of diversity within this single species remains a puzzle.

MIT scientists discovered an amazing amount of diversity among a population of marine microbes living in a few drops of water. Each subpopulation of the marine microbe Prochlorococcus is characterized by a shared genomic "backbone." The figurative backbones are depicted in this artist's rendering. 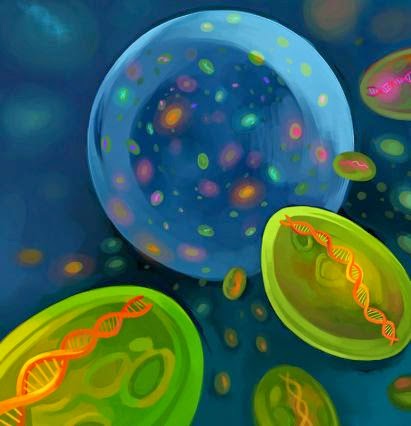 To probe this question, scientists in MIT’s Department of Civil and Environmental Engineering (CEE) recently performed a cell-by-cell genomic analysis on a wild population of Prochlorococcus living in a milliliter — less than a quarter teaspoon — of ocean water, and found hundreds of distinct genetic subpopulations.


Each subpopulation in those few drops of water is characterized by a set of core gene alleles linked to a few flexible genes — a combination the MIT scientists call the “genomic backbone” — that endows the subpopulation with a finely tuned suitability for a particular ecological niche. Diversity also exists within the backbone subpopulations; most individual cells in the samples they studied carried at least one set of flexible genes not found in any other cell in its subpopulation.

Sallie Chisholm, the Lee and Geraldine Martin Professor of Environmental Studies in CEE and in MIT’s Department of Biology; former CEE postdoc Nadav Kashtan; and co-authors published a paper on this work in the April 25 issue of Science.

The researchers estimate that the subpopulations diverged at least a few million years ago. The backbone is an older, more slowly evolving component of the genome, while the flexible genes reside in areas of the genome where gene exchange is relatively frequent, facilitating more rapid evolution.

The study also revealed that the relative abundance of the backbone subpopulations changes with the seasons at the study site, near Bermuda, adding strength to the argument that each subpopulation is finely tuned for optimal growth under different conditions.

“The sheer enormity of diversity that must be in the octillion Prochlorococcus cells living in the seas is daunting to consider,” Chisholm says. “It creates a robust and stable population in the face of environmental instability.”

Scientists on an oceanographic research ship lower a rosette of 24 bottles into the ocean to capture samples of wild microbes in their natural habitat.

Ocean turbulence also plays a role in the evolution and diversity of Prochlorococcus: A fluid mechanics model predicts that in typical ocean flow, just-divided daughter cells drift rapidly, placing them centimeters apart from one another in minutes, tens of meters apart in an hour, and kilometers apart in a week’s time.

“The interesting question is, ‘Why does such a diverse set of subpopulations exist?’” Kashtan says. “The huge population size of Prochlorococcus suggests that this remarkable diversity and the way it is organized is not random, but is a masterpiece product of natural selection.”

Chisholm and Kashtan say the evolutionary and ecological distinction among the subpopulations is probably common in other wild, free-living (not attached to particles or other organisms) bacteria species with large populations and highly mixed habitats.

“This is perhaps the most sophisticated and thorough study yet to be published on the fine-scale genetic diversification of an environmental microbial species, and it correctly, I think, predicts that amazingly diverse populations may be maintained over astonishingly long times,” says Ford Doolittle, a member of the biochemistry and molecular biology faculty at Dalhousie University who was not involved in the research. “If microbiologists persist in believing in ‘species,’ they will likely have to drastically revise upward their estimates of how many such things there are. What we will probably be arguing about for a long time is what processes or forces other than selection might be responsible for such stable diversity, and, unless we find such processes, how something so seemingly well mixed as the ocean can offer up so many different tiny selective regimes.”

Scientists on an oceanographic research ship lower a rosette of 24 bottles into the ocean to capture samples of wild microbes in their natural habitat. 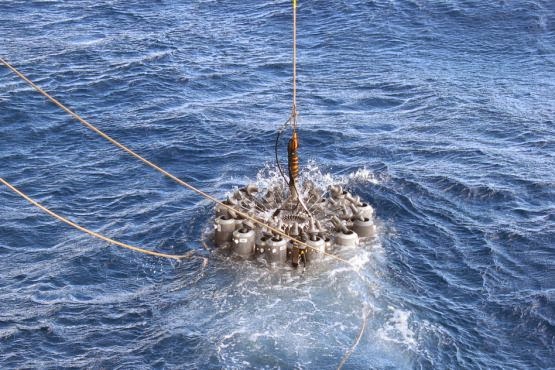 Photo: Paul Berube/MIT
“This study may be setting a record for progress made in microbiology by analyzing just three drops of seawater,” says Ramunas Stepanauskas of the Bigelow Laboratory for Ocean Sciences in Boothbay, Maine, who worked on the genomic analysis.