The centimeter-sized fragments and smaller particles that make up the regolith — the layer of loose, unconsolidated rock and dust — of small asteroids is formed by temperature cycling that breaks down rock in a process called thermal fatigue, according to a paper published April 2nd in the Nature Advance Online Publication.

Previous studies suggested that the regolith of asteroids one kilometer wide and smaller was made from material falling to the surface after impacts and from boulders that were pulverized by micrometeoroid impacts. Recent laboratory experiments and impact modeling conducted by a team of researchers from Observatoire de la Côte d’Azur, Hopkins Extreme Materials Institute at Johns Hopkins University, Institut Supérieur de l’Aéronautique et de l’Espace and Southwest Research Institute (SwRI) have shown that the debris from large impacts reaches escape velocities and breaks free from the gravitational pull of these asteroids, indicating this mechanism is not the dominant process for regolith creation.

This picture of Eros, the first of an asteroid taken from an orbiting spacecraft, is a mosaic of four images obtained by NASA's NEAR mission immediately after the spacecraft's insertion into orbit. 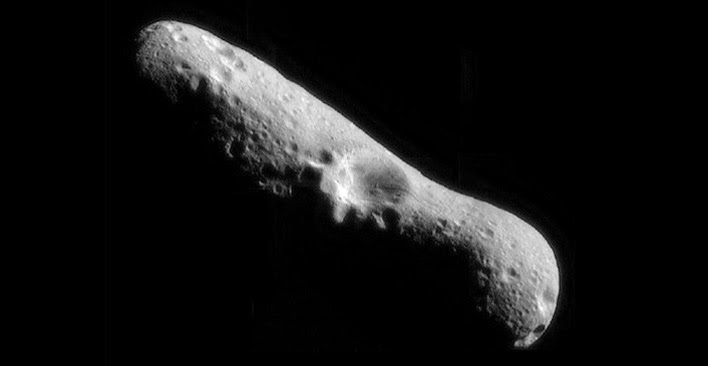 The team’s research showed that thermal fragmentation, which is induced by mechanical stresses caused by temperature variations of the rapidly spinning asteroid’s short night and day, to be the process primarily responsible for breaking up rocks larger than a few centimeters on asteroids.

“We took meteorites as the best analog of asteroid surface materials that we have on the Earth,” said Dr. Marco Delbo of the Observatoire de la Côte d’Azur. “We then submitted these meteorites to temperature cycles similar to those that rocks experience on the surfaces of near-Earth asteroids and we found that microcracks grow inside these meteorites quickly enough to entirely break them on timescales much shorter than the typical lifetime of asteroids.”

Model extrapolation of these experiments also showed that thermal fragmentation caused rocks to break down an order of magnitude faster than from micrometeoroid impacts, particularly at distances of 1 astronomical unit (about 93 million miles) with the speed of breakdown slowing at distances further from the Sun.

“Even asteroids significantly farther from the Sun showed thermal fatigue fragmentation to be a more relevant process for rock breakup than micrometeoroid impacts,” said Dr. Simone Marchi, a scientist in the SwRI Space Science and Engineering Division.

The results of this study suggest that thermal fragmentation, combined with solar radiation pressures that sweep away surface particles, could completely erode small asteroids at distances closer to the Sun (about 28 million miles) in about 2 million years.