Reconstructed Ancient Ocean Reveals Secrets About The Origin Of Life

Researchers from the University of Cambridge have published details about how the first organisms on Earth could have become metabolically active. The results, which are reported in the journal Molecular Systems Biology, permit scientists to speculate how primitive cells learned to synthesize their organic components – the molecules that form RNA, lipids and amino acids. The findings also suggest an order for the sequence of events that led to the origin of life.

A reconstruction of Earth's earliest ocean in the laboratory revealed the spontaneous occurrence of the chemical reactions used by modern cells to synthesize many of the crucial organic molecules of metabolism. Previously, it was assumed that these reactions were carried out in modern cells by metabolic enzymes, highly complex molecular machines that came into existence during the evolution of modern organisms.

A reconstruction of Earth's earliest ocean in the laboratory revealed the spontaneous occurrence of the chemical reactions used by modern cells to synthesize many of the crucial organic molecules of metabolism (bottom pathway). Whether and how the first enzymes adopted the metal-catalyzed reactions described by the scientists remain to be established. 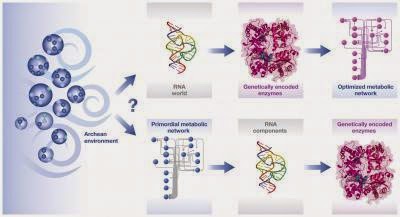 Almost 4 billion years ago life on Earth began in iron-rich oceans that dominated the surface of the planet. An open question for scientists is when and how cellular metabolism, the network of chemical reactions necessary to produce nucleic acids, amino acids and lipids, the building blocks of life, appeared on the scene.

The observed chemical reactions occurred in the absence of enzymes but were made possible by the chemical molecules found in the Archean sea. Finding a series of reactions that resembles the "core of cellular metabolism" suggests that metabolism predates the origin of life. This implies that, at least initially, metabolism may not have been shaped by evolution but by molecules like RNA formed through the chemical conditions that prevailed in the earliest oceans.

"Our results demonstrate that the conditions and molecules found in the Earth's ancient oceans assisted and accelerated the interconversion of metabolites that in modern organisms make up glycolysis and the pentose-phosphate pathways, two of the essential and most centrally placed reaction cascades of metabolism," says Dr. Markus Ralser, Group Leader at the Department of Biochemistry at the University of Cambridge and the National Institute for Medical Research. "In our reconstructed version of the ancient Archean ocean, these metabolic reactions were particularly sensitive to the presence of ferrous iron that helped catalyze many of the chemical reactions that we observed." From the analysis of early oceanic sediments, geoscientists such as Alexandra V. Turchyn from the Department of Earth Sciences at the University of Cambridge, one of the co-authors of the study, concluded that soluble forms of iron were one of the most frequently found molecules in the prebiotic oceans.

The scientists reconstructed the conditions of this prebiotic sea based on the composition of various early sediments described in the scientific literature. The different metabolites were incubated at high temperatures (50-90oC) similar to what might be expected close to a hydrothermal vent of an oceanic volcano, a temperature that would not support the activity of conventional protein enzymes. The chemical products were separated and analyzed by liquid chromatography tandem mass spectrometry.

Some of the observed reactions could also take place in water but were accelerated by the presence of metals that served as catalysts. "In the presence of iron and other compounds found in the oceanic sediments, 29 metabolic-like chemical reactions were observed, including those that produce some of the essential chemicals of metabolism, for example precursors of the building blocks of proteins or RNA," says Ralser. "These results indicate that the basic architecture of the modern metabolic network could have originated from the chemical and physical constraints that existed on the prebiotic Earth."

The detection of one of the metabolites, ribose 5-phosphate, in the reaction mixtures is particularly noteworthy. Its availability means that RNA precursors could in theory give rise to RNA molecules that encode information, catalyze chemical reactions and replicate. Whether and how the first enzymes adopted the metal-catalyzed reactions described by the scientists remain to be established.
###